Opinion: The Chris Rennard scandal shines a light on workplace sexual harassment, and breastfeeding, is it really offensive?

Most telling of the many, variously depressing elements about the Chris Rennard scandal is surely the outpouring of similar experiences to those alleged against the Lib Dem peer (all of which he strenuously denies) that it has unleashed from women across all professional spheres.

The script these incidents tend to follow is loathsomely similar: man in a position of power makes advance, is rebuked, offers preferential workplace treatment, is rebuked, threatens to make work life difficult … don’t think I’m for a second trying to denigrate these women’s experiences, I know firsthand how debilitating and destructive sexual harassment in the workplace can be.

No, I’m suggesting that the intensity of parallels in this experience show that the problem of workplace harassment is systemic and endemic.

The slew of sex scandals of the past year, from the mildly diverting (Elmo, John Travolta) to the unspeakably abhorrent (Haut de la Garene, Jimmy Savile), has felt at times like a society clearing its decks prior to a seismic shift in outlook.

But the notion that the structural prejudices faced by women are changing is at risk of being overstated.Consider for a second the way in which politicians and large institutions have used these scandals.

As opposed to being seen as a chance to rectify the root causes of sexual harassment, these scandals have been cynically leveraged as political weapons.

Savile was used to bash the BBC, while Rennard is being used as a tool to undermine his party during a by-election campaign – they became little more than crisis management PR drills.

Conversely, and almost as a reaction to this dismissiveness, some people are in the dangerous position of conflating the abhorrent crimes of Jimmy Savile, workplace harassment, and merely misplaced romantic inquiries.

We mustn’t suggest that abuse and a drunken lunge at an office Christmas party are on the same spectrum. 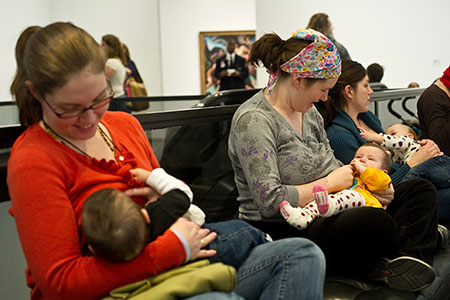 The news that a Sydney woman was told, while breastfeeding her child in a cafe, that what she was doing was “disgusting” and an “offence to humanity” was – were it not for the indignity the woman was subjected to – farcically hilarious.

A waiter in the cafe initially asked Regan Matthews to stop before the manager of the cafe is reported to have waded in, allegedly calling breastfeeding in public “offensive” and an “offence to humanity”.

This aversion to breastfeeding strikes me as one of the most bizarre things to stoke the fires of outrage.

I have exactly no idea why the image of a mother feeding her child would cause outrage in anyone, and nor can I find an explanation which ventures much beyond: “it’s gross, we’re not animals”.

Well, no, you’re wrong there, we are animals – we’re just snazzy monkeys with fancy Dan haircuts.