The pair have collaborated musically before, but the showbiz news service reckons there’s more to it.

They say The A-Team chart-topper, 22,  “stayed in (Swift’s) room, just the two of them, until around 4am,” and quoted a source as saying the red-headed singer-songwriter looked “very happy” when he left… whatever that means.

Then, apparently, Swift had her car take Ed away. It turns out, for those not in the know, the pair dated last spring.

Swift performed a sassy and sexy version of her song I Knew You Were Trouble at the Brits in front of her ex, One Direction’s Harry Styles, who is mates with Sheeran. 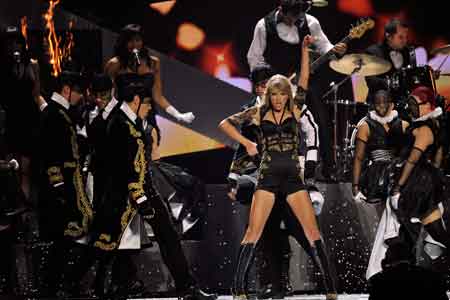 Could this finally be the real deal for Swift, who’s been out with the likes of John Mayer also, or – shock horror – could they just be friends?

Swift tweeted Sheeran on his birthday: ‘So. One of my favorite human beings on the planet turns 22 today. I hope @edsheeran has the most perfect show in LA tonight! HAPPY BDAYYYY.’

He responded by quoting one of her lyrics, saying: “I don’t know about you, but I’m feeling pretty damn 22 right about now’, which is a lyric from her song 22.

Take from that what you like… which is probably very little.

Will you be getting lucky at the office Christmas party?

Boozy careers: Love a drink and want a job getting paid to do it?

East side story: Explore Eastern Europe by travelling arm-in-arm with the ‘Baltic Bear’