Overdoing it in Lisbon: Where booze hounds, shopaholics and foodies are in their element

But they’re all making a huge mistake by overlooking Lisbon.

Not only can the Portuguese capital get in the ring with any of the more popular European holiday heavyweights, it’s also considerably cheaper, with bargain bars and reasonably priced hostels around every corner.

Cobbled streets, quiet old churches and the iconic Cristo Rei statue – which looks serenely out over the city – might give the impression that Lisbon is a place of old-fashioned moderation.

But in reality, the city is full of opportunities for even the most hedonistic of holidaymakers to over-indulge themselves. 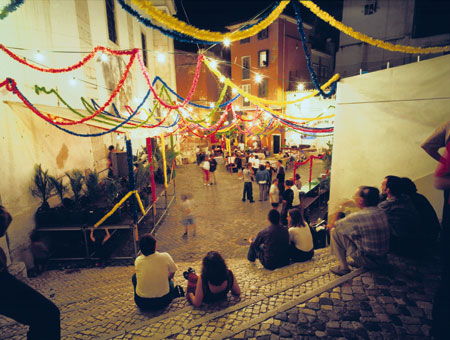 Shop ‘til you drop

Vintage bargain hunters and retro enthusiasts will definitely be going home with their suitcases stuffed full.

Sweetly wrapped soaps and bright trinket boxes sold in Baixia’s shopping district make for great gifts, but some of Lisbon’s best buys are classic pieces, such as the old-fashioned, handmade leather gloves you can pick up for a snip at Luvaria Ulisses, which has been open since 1925.

Many of the old fabric, bead and knicknack shops nearby in Baixa have been run by the same families for generations and have a genuinely old-world atmosphere.

For more up-to-the-minute gear, visit local designers’ boutiques in the backstreets of Bairro Alto where offbeat, bold jewellery is for sale alongside quirky clothes. The most famous local fashion designer, Ana Salazar, has an outlet on Rua do Carmo.

Usually when you’re travelling abroad it’s best to avoid the chains you can shop in just as easily at home.

But it’s worth keeping in mind that clothes from high street faves such as Zara and Mango are sold here for significantly less than they are in London, so keep your eyes peeled around Chiado or Avenida da Liberdade for a steal.

If you’ve got any room left in your luggage, allow yourself a few hours’ wandering through the stalls at Feira da Ladra, a flea market that’s nearly 1000 years old. 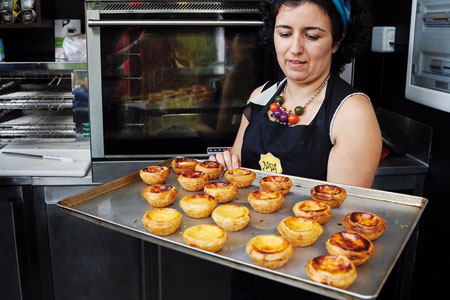 Because of Lisbon’s closeness to the sea, it’s not surprising that fish and seafood appear on practically every menu in  the city. Look out for grilled sardines and sea bass, which you can often spot being cooked over a fire in the street.

One local favourite is bacalhau, which is dried salted cod.

Lisbonites swear it’s delicious, although many would consider it something of an acquired taste. Finally, don’t even think about leaving Lisbon until you’ve scoffed down a box full of the infamous pasteis de nata.

These rich, custardy egg tarts are probably Lisbon’s most famous export, and are served piping hot. 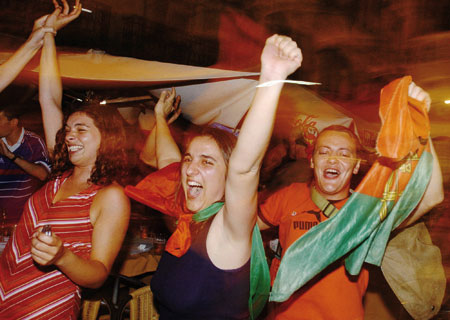 Now this is where things get really hedonistic. The average cost of a pint in Lisbon is less than £2, which is reason enough to celebrate.

The main drinking and clubbing area is downtown Bairro Alto, where traditional taverns are clustered alongside restaurants and chic cocktail bars.

It gets really raucous here at the weekends, and because of the party vibe and low prices, the area is becoming increasingly popular for British stag and hen dos. You have been warned.

Most beer drinkers get stuck into the local draught, Imperial, but cocktails are also popular and relatively inexpensive here at around £5 a drink.

There are also plenty of tasty regional Portuguese wines to try, such as Dão reds, Vinho Verde from Minho, and of course port.

If you want to go for a more traditional tipple, try ginginha, which is a liqueur made by infusing ginja berries (or sour cherries) in alcohol.

It’s served in a shot glass with fruit at the bottom and is so delicious that a local compliment for anything that tastes good is: “Sabe que nem ginjas” (“It tastes like ginja”). 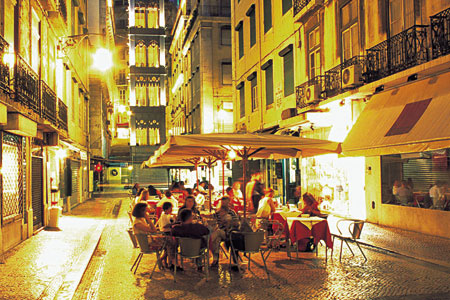 Budget: The famous Portuguese custard tarts can be found in numerous stalls and cafes in Lisbon, but aficionados recommend those served at Cafe Pastéis de Belém.

Founded in 1837, this tearoom keeps its recipe a secret, but however they’re making them, each is a mouthful of goodness and only about 50p.

Midrange: Ideal for a leisurely and inexpensive lunch, Pois, cafe has an often-changing menu of sandwiches, soups, pasta and rice dishes. The atmosphere is warm and friendly. Mains from £6.

Luxury: Housed in an old 17th-century convent, A Travessa delivers a very traditional Portuguese meal, which could include anything from filet of wild boar in port-wine to John Dory in saffron sauce, served up, naturally, with some great Portuguese vinos. Mains from £14. 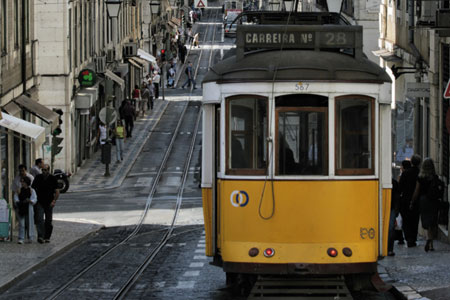 Budget: Only three people can fit inside A Ginginha, so make your drink of the cherry liquer a swift one. A fruity shot of this traditional Portuguese drink costs about £1. (Largo de São Domingos 8, tel. + 351 21 886 2449)

Midrange: he place to go for top-notch cocktails is Cinco’s Lounge, a low-lit, funky bar with a creative drinks list. Make sure you order the Right Said Fred, with cardamom, fresh pineapple, lime and lashings of rum. Cocktails cost just £5 a pop.

Luxury: You can’t leave Lisbon without a night in a Fado House, where folk music is played on a Portuguese guitar accompanied by a solo singer.

Senhor Vinho is one of the most authentic in town and is owned by one of the country’s top performers, Maria da Fé. Come for a meal or just a drink. Wine costs about £7 a glass.

Budget: The ever-popular Oasis Hostel is on the doorstep of all the Bairro Alto action. It’s housed in a completely restored 100-year-old Portuguese mansion and has an easygoing, community vibe. Dorm rooms start from £10pn.

Midrange: Situated, as its name suggests, right near the river in Alfama, Sweet Lisbon River Guesthouse is a homely place to stay – they’ve even got board games available to while away the hours. Double rooms start at £20pn.

Luxury: The super-stylish Hotel Lisboa has chic wooden floors and colourful, trendy furnishings. The cocktails in the lobby bar, Mara, pack a punch, too. Definitely one to splash out on. Rooms start at £77pn.