Oxford: visit the university and former prison on a day trip

England is about more than the Royal family and warm beer – it also boasts a glorious history of knowledge and education that has illuminated much of the world. More evocatively than anywhere else, Oxford provides a link to that legacy. Only an hour from London on the train and easily explorable on foot, a trip to Oxford makes for a perfect day trip.

If you thought that Oxford was all about spires and world-class academia, think again. It also has a dark and bloody history, which you can learn about in the little-known former gaol and new attraction, Oxford Castle Unlocked.
A prison for 800 years until 1996, when  it was forced to close due to its poor standards, the lock-up once housed rapists and murderers. Experience the austere confines of the 18th-century debtors’ tower and prison D-wing, before venturing underground to the icy chill  of the 900-year-old crypt, once a storage space for food, drink and dead bodies, and now thought to be haunted by the ghost of a touchy-feely cloaked monk who likes  to pull hair and moan.

Follow in the footsteps of Tolkien, CS Lewis and Oscar Wilde by getting off the main drag and exploring the town’s paved alleyways on a two-hour walking tour.
You’ll swing by some of Oxford university’s colleges with their pretty courtyards, grand dining halls and centuries-old facades peppered with photogenic gargoyles that vary from squirrels to dogs. The university is 1000 years old, making it one of the three oldest universities in the western world, along with Paris and Bologna, and it’s home to 42 colleges and 432 societies that range from teddy bear’s picnics to tiddliwinks.
We’re shown the spot on the lawn of Exeter College where the fictitious Inspector Morse collapsed and died. Make  a stop at Bodleian Library, used as Hogwarts library  in two of the Harry Potter movies, before walking through the beer halls where you’ll find a chalk board paying tribute to legendary former Aussie PM Bob Hawke, who entered the Guinness Book of Records for sculling two and-a-half pints of ale in 11 seconds at University College.

Finish up your day by taking a tranquil cruise along the river on a soundless electric boat with Oxford River Cruises (oxforddrivercruises.com), following the University regatta course. Pass ancient Folly Bridge, the university rowing houses, attractive barges and bizarrely, fields of cows, with the city’s towers and spires providing the dramatic backdrop.
On the river itself, goggle at students rowing in preparation for their inter-college tournaments in June and the ubiquitous punts, used on the Thames for centuries. Keep an eye out for the Isis tavern, one of the UK’s few pubs that you can’t drive to. The boozer is reachable only on foot or by boat. Before taking the train home, enjoy a pint on the outdoor terrace of the Head of the River pub, on Folly Bridge, overlooking the river. 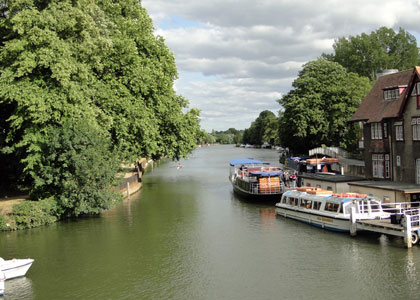 For budget accommodation, crash at YHA Oxford (yha.org.uk) on Botley Rd, which offers dorms from £22, or Oxford Backpackers Hostel (hostels.co.uk) in Hythe Bridge Street, which offers dorm beds from £18. Go upmarket at the boutique Old Bank Hotel, in High St (oldbank-hotel.co.uk), which offers double rooms from £240 a night.

Oxford is brimming with historic taverns and riverside inns, perfect for a pint and a hearty lunch. The Bear Inn, in Alfred St, has been serving up beer to students since 1242, while The Turf, in Bath Place, offers a dazzling array of ales. Student favourite The King’s Arms, in Holywell St, claims its has the smartest drinkers of any watering hole in the world.

Visit the historic Oxford Covered market, which offers a top-notch range of food, from wild boar to Isis Cheese. Also, look out for the Cake Shop  to marvel at the comical novelty wedding cakes and to buy scrumptious cupcakes. For first-class gastronomy in a pub setting, visit the Oxford Retreat, in Hythe Bridge St, offering hearty cuisine like wild boat bangers and mash. If you’re shopping on the main drag, stop for a feed at Fire and Stone in George St. 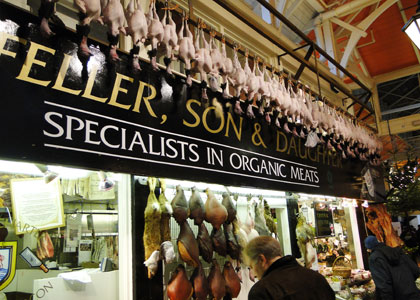 Getting there: First Great Western (08457 000 125; firstgreatwestern.co.uk)
Trains travel to Oxford from London Paddington every 15 minutes from £4 each way. The journey takes one hour.
See: visitoxfordandoxfordshire.com for visitor information and to book your walking tours.