I repeatedly tumble, propelling my body forwards, attempting to ensure my shoulders absorb the impact. As an incredibly clumsy person able to fall over on flat ground without any obstacles, I approach this day with trepidation.

Since first seeing the opening sequence of Casino Royale, I’ve been interested in parkour but I never imagined I’d be able to have a stab at it without breaking anything.

Luckily, my instructor, 30-year-old Andy Nox (known as Noxsta), who runs the Urban Shadows Parkour team, is very clear about the importance of safety.

You’d be forgiven for mistaking parkour for a dangerous adrenaline sport if you’ve merely watched Daniel Craig monkeying around or seen Jake Gyllenhaal building-hopping on the big screen in The Prince Of Persia.

Parkour has existed since the beginning of mankind with hunter-gatherers using it to survive, but it has only been given a name in the past few decades, recently receiving widespread recognition. 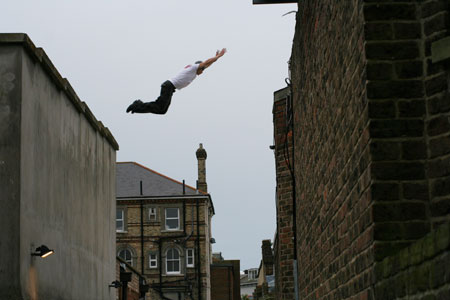 Those practising the sport (traceurs) aim to get from A to B in the fastest and safest way, using only their bodies to creatively utilise all obstacles.

Unlike other extreme sports, parkour is not just about agility and natural highs but is also concerned with the improvement of the mind, challenging traceurs to overcome limitations and the restraints of their inhibitions while enhancing self-confidence.

With the most extreme parkour moves in mind, I’m grateful when Andy leads me to a quiet field in the centre of Eastbourne but not so pleased when he instructs me to run twice around its perimeter. After a lap I’m panting and side-stepping before he has me running backwards and doing a series of floor stretches, stressing the importance of warming up.

Now the not-so-fun-bit is over with, I’m on to a dizzying ‘parkour roll’ – like a gymnastics-style forward roll but performed with a sideways motion, rather than head on – and I’m soon laughing my way through combinations of small jumps with runs and rolls. 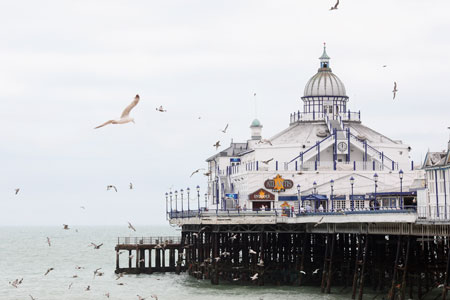 When it comes to attempting ‘the lazy’ (using my arms to vault over a wall with sideways-positioned legs) it seems my body is taking the name too literally and I instead opt for a slightly more successful ‘split vault’ – propelling my body over the wall one leg at a time – before Andy wraps up my one-hour lesson by demonstrating ‘precision’ – a small jump from one exact point to another.

Living up to its name as the “sunniest place in the UK”, Eastbourne is apparently a traceur’s paradise.

As I bask in the sun, Andy tells me some of its merits: “We have all the groynes and rails along the seafront, offering some terrific high drops, and an amazing section of roof-tops. Plus, Sovereign Harbour comes complete with moving bridges.” Aside from being a traceur’s playground, Eastbourne’s popular with filmmakers and has been voted a top staycation spot, winning the 2010 UK’s Most Holiday-Friendly Destination award.

Surrounded by the South Downs with the beautiful Beachy Head nearby, the city offers spectacular scenery and plenty of original Victorian architecture, providing the perfect backdrop for films such as Made In Dagenham and the recent remake of Brighton Rock.

In 2008’s Angus, Thongs And Perfect Snogging, Robbie tells Georgia that Eastbourne is “the new Brighton”.

The town might have once been considered the UK’s retirement capital, but with a growing student population and an emerging parkour scene, Eastbourne is certainly undergoing an image change for the better.

Return train tickets from London to Eastbourne cost from £10pp with Southern Railways.