Discover a haven for bikers, hikers, hang-gliders and rock climbers in the Peak District.

Set in the heart of the Peak District at the head of the optimistically named Hope Valley, the pretty village of Castleton is rich in history, legends, natural beauty, and is a veritable paradise for outdoor enthusiasts.

Steep limestone hills overlook the village from all sides while the defiant Peverill Castle has guarded over local on-goings since it was built on an overhanging cliff in Celtic England in 1088.

To the north looms the modest beauty of Mam Tor, the ‘Shivering Mountain,’ which not only holds the remains of Iron Age fortifications but also marks the start of Hope Valley’s gritstone moors, limestone outcrops and deep cut dales.

The region is best known as wonderful walking country, although the hills are also a haven for bikers, pony trekkers, hang-gliders and rock climbers as well as for the quieter activities of artists, anglers and birdwatchers. Using Castleton as a base there are ample outdoor pursuits to take part in throughout the year.

Just beyond Mam Tor is the tiny Norman village of Edale and to serious walkers marks the start of The Pennine Way. The 434km walk takes you from the Peak District along the rugged backbone of England, through the Yorkshire Dales and over Hadrian’s Wall to the Scottish Cheviots. The route takes 14 to 16 days to complete and although one of Britain’s toughest walks is also one of the finest upland routes in England.

If the two-week trek is a little too long to commit, most walkers ramble to the top of the first peak, Kinder Scout, for amazing views and get back down in a day.

Get on your bike

By bike, there are endless routes. However from Castleton, many riders will at some point encounter the dramatic twists and turns of Winnats Pass.

The pass, once used for testing motor vehicles, winds steeply through a cleft surrounded by towering limestone pinnacles. Local legend has it that the pass is haunted, after a young couple were murdered by miners, but, that danger aside, the route is notoriously windy and will challenge even the fittest of mountain bike riders.

For those who are more concerned with getting into the rocks, the hills are clustered with cave networks including four individually unique show caverns.

Treak Cliff Cavern, for example, contains an underground wonderland of stalactites, stalagmites and rock formations. Peak Cavern, (known locally as the Devil’s Arse until Queen Victoria paid the town a visit and a more polite name was deemed suitable) holds the remains of an ancient underground mining village. Meanwhile, in Speedwell Cavern you’ll find the famous ‘bottomless pit’ (until science proved otherwise) which visitors quietly glide to on an underground canal system.

These and scores of other deep cave networks and disused former mines are all popular sites for potholing and caving.

The majority of caves are found to the west of Castleton, on the limestone moorland between Castleton and Sparrowpit. Cave systems include Giants Hole, P8, Oxlow Mine and Nettle Pot, and there are circuits that cater from beginner’s levels to the most difficult grades. 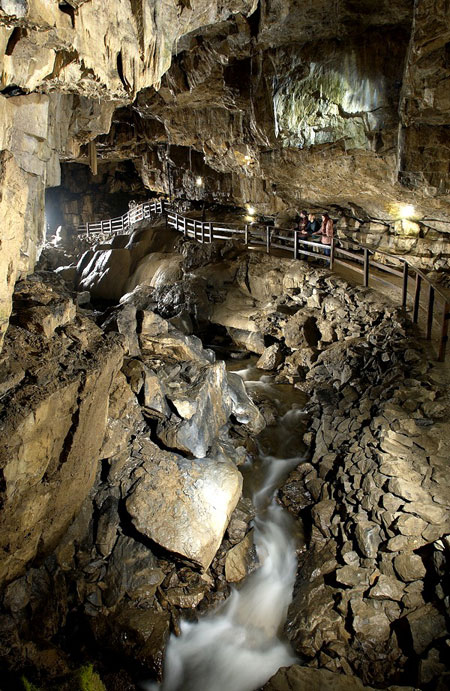 Legend has it that if you stand close to the edge of the huge Ladybower Reservoir you can still hear the bells of the underwater church chiming to call villagers to service.

The truth behind the ‘drowned’ villages, although not quite as romantic, is that beneath the water lies an area that was once the towns of Derwent and Ashopton – complete with small stone cottages, tree lined lanes, a 17th century church and an old mansion.

During the 1930s these Victorian cotton villages were evacuated and flooded in one the biggest reservoir constructions of the period to supply water to the expanding industrial cities of Nottingham, Sheffield and Derby.

The site today is still a stunning tourist attraction with walks and bike rides running the circumference. When waters drop sufficiently low, such as in 2004, the village of Derwent does indeed reappear.
However, the church has sadly been lost forever. It was blown up in the 1940s after spooked locals could see the spire sticking through the surface.

WHEN TO GO: The region makes a great destination to visit year round, although some of the outdoor activites will not be possible in more extreme weather conditions.
GETTING THERE: Trains from King’s Cross to Castleton take three hours, 30 minutes; or driving will take just over three hours.
GETTING AROUND: Local buses link the main sites together or the region can be explored on foot or by bike.
ACCOMMODATION: Hotels cost £50– £120 while beds in the Castleton YHA start at £14.

Life is a Beach: The Fiji Islands are so beautiful they have to be seen to be believed