Pete Doherty has been jailed for six months for possession of cocaine after being caught on camera smoking crack with heiress Robyn Whitehead the day before she died.

Doherty will go to jail today, cancelling the Glasgow performance of his tour tonight.

Police investigating the death of Whitehead – who died of heroin poisoning last year – arrested Doherty in January. Whitehead had been making a film about the ex-Libertines and Babyshambles singer.

However Snaresbrook Crown Court heard today that Whitehead’s death was not caused by the crack cocaine she was seen to share with Doherty.

Doherty and his friend Peter Wolfe were charged with possession when footage from Whitehead’s documentary, seized by police, showed them smoking crack cocaine in Hackney, east London, with the late heiress. 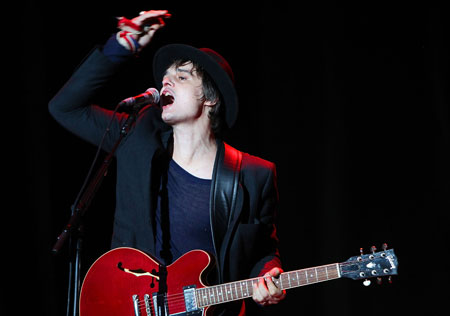 “The evidence thereafter is recorded on the footage that Miss Whitehead was taking as part of her documentary,” said prosecutor Alison Morgan.

“On the Friday night Robyn Whitehead and Peter Wolfe were collected from the station by Miss Whitehead’s ex-boyfriend.

“It was obvious to him that Mr Wolfe was withdrawing from drugs.

“During the course of that journey Peter Wolfe said that he needed to score.

“They stopped in Hoxton Market and Mr Wolfe got out and returned a short while later. The assumption being that he had scored.

“The evidence thereafter is recorded on the footage that Miss Whitehead was taking as part of her documentary.

“Mr Wolfe was smoking form the small bottle in the photo and that was crack cocaine.

“A couple of minutes later he was shown to hand that bottle to Miss Whitehead who took the bottle and then Mr Wolfe assisted her to light it.

“Mr Wolfe is then seen again smoking from the pipe.”

Morgan said: “Mr Wolfe and Miss Whitehead, who had stayed at the address overnight, were joined by Mr Doherty.

“Mr Doherty can be seen to also use the small pipe to smoke crack-cocaine shortly after entering the address.

“He used a knife to cut from a white block, which the Crown says was clearly crack-cocaine.”

Whitehead’s body was discovered the day after the footage was recorded. However Morgan noted that during the film, Doherty can be heard refusing to give Whitehead a pipe of crack cocaine when she asked for one.

Sentencing him, Judge David Radford said: “The circumstances in which the committal of these offences which I have to deal with today is tragic.

“Police became aware of the relevant evidence because of the investigation which followed the discovery of the sad death of a young woman who had been present at the address where the offences had been committed.

“I make it clear though, abundantly clear, that the young woman’s death was not caused by that supply of crack cocaine.”

Peter Ratliff, defending, said Doherty had an addiction but had never sought to glamorise the use of drugs.

“Nobody who listens to his lyrics, who reads the diaries he has published or sees the interviews with him could think his life glamorises drug use,” Ratliff said.

Investing your money for long-term growth