But after a few nights in the chaos of Bangkok there are an infinite number of ways to spend the rest of your time in Thailand, namely by heading to one of the many idyllic islands dotted around the coast.

Oh, and naturally, plenty more places to party very, very hard indeed. So sling your flip flops into your bag and head to one of these perfect island paradises.

You can hop between them, stay for a month on your favourite or just arrive and see how you feel once you’re there with hot sand underneath your toes – you might decide to never leave … 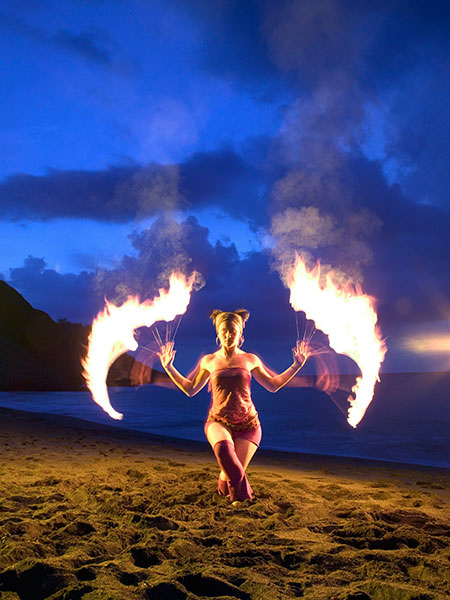 Practically every list of the world’s top diving locations rates the Similan Islands near the top, and that’s because they have some of the most jaw-dropping underwater sights.

The archipelago of nine islands is a National Marine Park with calm, clear waters (up to 30m visibility) that are just ideal for underwater explorations.

The west coast is famous for its huge granite boulders that peek above the water’s surface and drop up to 50m underwater, creating tunnels and swim-throughs for divers to investigate.

Keep an eye out for the clown triggerfish and the whitetip reef sharks here, along with rare oriental sweetlips and harlequin sweetlips (both psychedelic-looking creatures).

On the east coast of the island there are lush coral gardens with sea anemones and a wide variety of reef fish, and if you’re lucky you might catch a glimpse of ghost pipefish, sea moths, frogfish and ribbon eels.

Of the many famous dive sites here, Elephant Head, East of Eden and Christmas Point are three of the most popular.

What else? The best beach in Thailand is, naturally, hotly disputed, but many agree that Donald Duck Bay on Koh Similan, the most developed of the nine islands, is a strong contender.

It’s so named because you can see a huge boulder out to sea that is bizarrely shaped a lot like the cartoon character.

If you want a few hours’ break from diving, this is a great place to lay down your towel and enjoy the scenery. 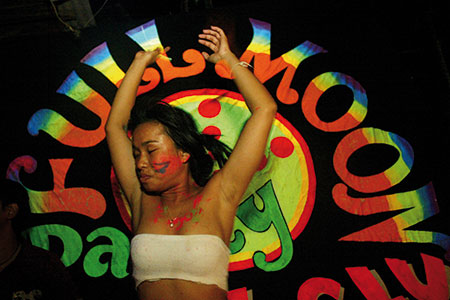 Haad Rin, the beach on the far south of Koh Pha Ngan, is notorious for having the wildest, most debauched full moon parties in Thailand.

Long-standing traditions for a night out here include tripping out on magic mushroom shakes (not that we’d recommend it), drinking buckets (yes, actual buckets) of Sang Som rum with Thailand’s lethal Red Bull, painting faces with fluorescent squiggles, jumping through burning skipping ropes and watching fire poi … in no particular order, but always followed by a rave on the beach that lasts until the sun comes up.

What else? If you’re feeling a little toxic after a few days of partying here, give the boozing a break and make the most of all the sports.

There are two Muay Thai boxing schools on the island where you can sign up for lessons (kobramuaythai.com) or you can join in games of beach football, table tennis or volleyball at sundown on most of the bigger beaches. 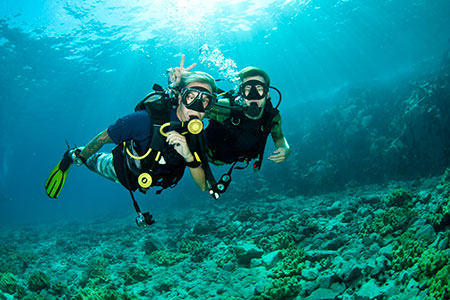 Once upon a time, the Thai government used to send its crooks to the island of Tarutao – to look at it now, this seems like the last thing that would put anyone off a life of crime.

The island is full of dense forest that’s teeming with wildlife: on the land and in the surrounding waters you can see sea turtles, whales, monitor lizards, crab-eating macaques, mouse deer and countless species of birds.

Some of the island is signposted in English, making it easy to follow wildlife trails, either on foot or by mountain bike (it’s easy to hire these on the island).

Just be sure to ask the island’s rangers before planning a lengthy trek, as parts of the island are more difficult to navigate than others.

What else? There is plenty of budget guesthouse accommodation on Tarutao, but it’s also very popular with campers, because while there are decent facilities, it rarely gets too crowded.

It only costs 65p per night to camp if you have you own tent and other roughing it equipment. 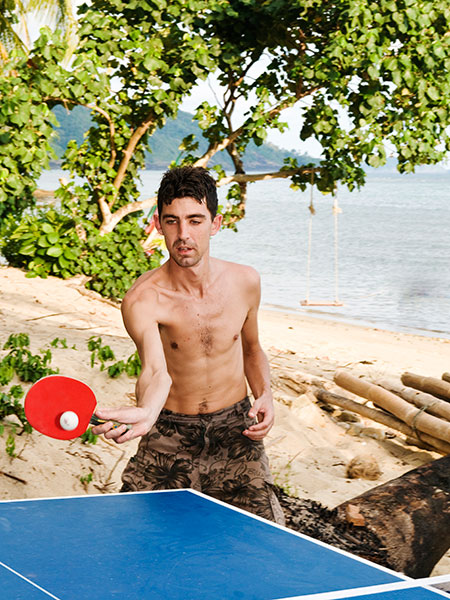 This island isn’t for everyone, particularly not if what you’re after is an unspoilt, serenely beautiful corner of the world to relax in.

But if you don’t mind your tropical paradises filled with blaring night clubs, crowds of tourists, international fast food chains and a bit of a seedy underbelly, then there is actually plenty of fun to be had on Samui – especially in the form of watersports.

Since the island is so developed this is the place to get stuck into activities, as there are heaps of established facilities.

There’s sailing, snorkeling, kayaking and kiteboarding for starters, as well as a few more extreme options – ever fancied a go on a Jetlev-Flyer?

This uses powerful jets of water to blast you into the air, Iron Man-style.

Book yourself a session with Wateredge Sports.

What else? Always wanted to tick ‘bungee jump’ off your bucket list? Chaweng Beach is the place to do it.

The 50m jumping platform is suspended over a giant plunge pool, and you can choose whether or not you want to get dunked. 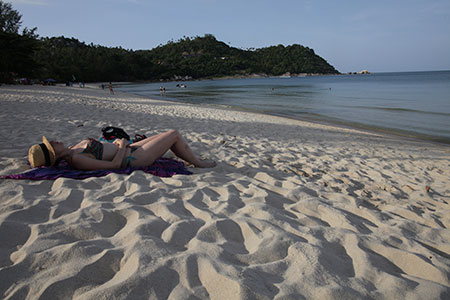 Best for: Swimming with sharks

Ko Phi Phi is probably best known for a combo of diving and partying, but the most exciting activity on the island is The Adventure Club’s Shark Watch tour (phi-phi-adventures.com).

This is an early-morning, three-hour trip on which you’re guaranteed to get to swim with black tip reef sharks.

You’re taken out on a long-tail boat to an area of shallows where the sharks like to swim, then you’re given the opportunity to do some snorkeling and swimming in the water with them.

The company is known for being environmentally conscious and promoting sustainable tourism.

Plus, they’re so confident that the sharks will be there that if you don’t see any you get a full refund.

What else? Toughen up those muscles by scaling the limestone cliffs at one of Ko Phi Phi’s top rock climbing spots, such as Hin Taak Climbing Area or Ton Sai Tower. 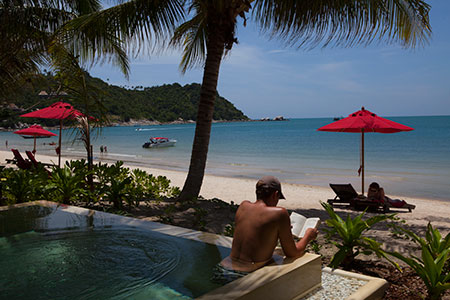 Well there certainly aren’t many of these left in Thailand, but there is one sandy spot left that you could genuinely call secluded.

Koh Kood is an absolute pain to get to (from Bangkok it’s a flight to Trat airport, then an hour’s boat ride from the mainland), which puts off lots of tourists but explains its serenity.

But once you get there … no landlines, virtually no internet access or electricity, just clean white sands, the odd hammock tied to a palm tree and plenty of blue waters if you fancy a dip.

Aow Pharo, Bang Bao and Siam Beach are some of the most pristine stretches, perfect for a lazy day sunbathing, while Tapao Beach is also known for being a top swimming and snorkeling spot.

What else: If you can be bothered to climb out of your hammock, Koh Kood island has lots of pretty waterfalls to visit.

Klong Chao Waterfall is a top spot for splashing about and has the royal seal of approval, as it was once visited by Thailand’s King Mongkut in the 1850s. 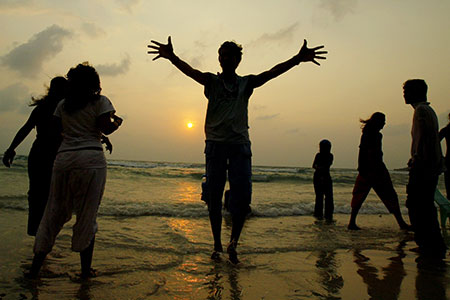 It wouldn’t be right to visit Thailand without checking out at least some of the country’s fabulous monuments to Buddhism.

Most of the most impressive temples and statues are on the mainland, but the tiny Koh Sirey, which is connected to Phuket by a bridge, has one that’s well worth exploring.

Wat Sirey, located at the top of a hill, is an unusual Buddhist temple with a series of rooms housing golden Buddha images.

Once you’re at the top of the hill, the views of the island are every bit as impressive as the Wat itself.

What else? The island is home to hundreds of cheeky wild monkeys.

Every evening islanders and tourists go to the recreation park near a mangrove swamp to feed the savvy primates their favourite bananas.

Find your paradise adventure over at TNT Tour Search.

Top 5 campsites around the UK: Got 99 problems? Don’t let a pitch be one