Playing with fire: Daredevil Mandy Clark brings her guerrila-style fire performance to the streets of London

While most Londoners will be craning their necks to watch fire decorating the sky at various Bonfire Night celebrations this week, a lucky few will find themselves treated to a scorching encounter face-to-face on the city’s streets – whether they like it or not.

The figure flaming from the shadows will be an Aussie ‘firebrand’ hell bent on sharing her blazing craft with as many (unsuspecting) people as she can reach, a guerrilla fire performer who’ll light up the lives of passersby before disappearing in a puff of smoke, leaving only the smell of paraffin in her wake.

If this sounds a bit frightening, fear not: Mandy Clark, originally from Cairns, Queensland, is out to entertain.

The dance and drama graduate-turned-firestarter describes her work as “subversive fire performances in various random, unexpected urban settings to entertain and inspire”.

In short, she’ll be pounding the pavements and painting shapes with flames to surprise you – in a nice way.

That said, there’s an element of danger to Clark’s artform – her guerrilla performances are illegal in some parts of the city (ie, those which require a licence for such shows and/ or need to approve health and safety). 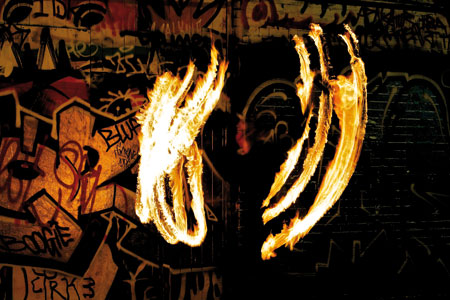 But Clark is willing to take the risk for her form of expression. “I’ve had encounters with the police,” Clark tells TNT. “I’ve started performing with photographers or a film crew so it looks more legit.”

Clark has been playing with fire in different forms for about 12 years to become a master of fire poi (two lengths of rope with fire balls at the end of them, which are swirled around furiously to create shapes and patterns in the night sky).

Playing with the flames has become an addiction: “The rush from spinning fire is immense,” she enthuses.

“I crave the sound inside the flames, the heat and the smell of the paraffin. All my senses are heightened and reacting during a performance.”

She does, however, recall finding out the hard way how risky her trade can be. “Once, I lost concentration and managed to wrap a fire snake (a long length of burning rope) around my wrist,” she remembers.

“Stupidly, I braved the burns and carried on. By the time I got home my arm looked like the Elephant Man’s. Then it got infected. It was really, really bad.” 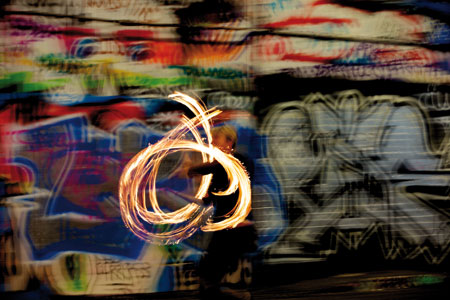 She goes on to explain the risks are even greater for inexperienced fire poi performers. “One of the most serious errors is having excess paraffin on the poi before you light it,” Clark says.

“When they start swirling, burning paraffin can spin off onto people, set them alight and even blind them.”

But Clark insists she is a “Nazi about safety” and, for her, the risks are outweighed by the reward – an audience’s reaction. “The public stand in delight and awe,” she says.

Tube commuters are similarly stunned when they encounter Clark after one of her shows: “They look at me like I’m a suicide bomber – I stink of paraffin, and look high as a kite from the performance,” she laughs.

Clark will release details of her guerrilla shows around the city this week on Facebook. One thing’s for sure – they’ll make a fiery alternative to the usual Bonfire Night displays.

London Eye encourages Londoners to put a ring on it