A polar bear mauled a British tourist to death in Svalbard, Norway, and injured four others in the attack, which happened during a camping trip on a remote glacier.

The man killed in the polar bear attack was part of a group of 80 young people who were on a camping trip with the British Schools Exploring Society (BSES). He is thought to have been one of the group leaders.

Four others were injured and had to be rescued from the remote Von Postbreen glacier about 25 miles from Longyearbyen, near Svalbard. They were taken to hospital by helicopter as the area in inaccessible by roads. 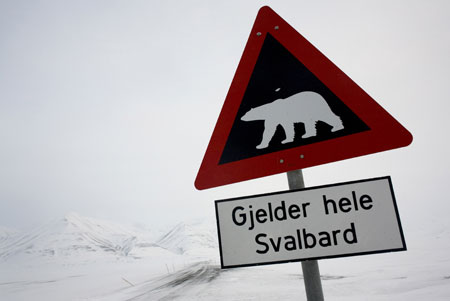 A road sign warning of polar bears outside Longyearbyen, Norway

The polar bear is thought to have attacked because it was looking for food. It has now been killed.

Liv Asta Odegaard, spokeswoman for the Governor of Svalbard, said: "We got a call via satellite phone from a British group of campers that there had been a polar bear attack and that one person was dead and that others were injured and they needed assistance.

"There are no roads in the area so we scrambled a helicopter."

The identity of the man killed by the bear has not yet been confirmed by the BSES. However it has been reported that those injured were trip leaders Michael Reid and Andrew Ruck, as well as two school-aged men, Patrick Flinders and Scott Smith.

“There were about 80 people all told in the expedition. The young people are all between 16 and 23," a BSES spokeswoman said.

Earlier this year the Svalbard Governor issued a warning about polar bears after several were seen close to towns.

A restaurant manager at Kroa bar in Svalbard, said that this wasn’t the first time there has been a polar bear attack.

"It's very sad. We have had attacks before. It happened a year ago when a Norwegian man was attacked,” she said. “As it was early in the morning I can only suppose the bear attacked them because it was looking for food."

Another local said: "It's not been the first time. Last summer a man was attacked by a polar bear and there have also been attacks on a man from Austria and a girl. Only the man in the attack last summer survived. He was taken in the mouth of the bear and his friend ran after it and shot it.

"The problem is, when the ice goes, the bears lose their way and cannot catch food. People don't really how dangerous they are. One came down to the sea recently and people were running down to take pictures."

In April 2009 a woman fell into the polar bear enclosure in Berlin Zoo and was mauled.

Polar bear attacks on humans are actually extremely rare. According to Polar Bears International attacks are only likely to occur when the bear is frightened or hungry.

However, as ice caps melt, bears are driven inland and the group expects that encounters with human beings will be on the rise.

In the event of being approached by a polar bear, people are advised to stand their ground, shout and, if with friends, form a group to look bigger.