To our left, an endless ocean stretches  to the horizon, and to our right, acres of verdant pasture and rolling fields unfurl at a angle that would  make even a goat wince. Having clambered up a rockface in Polperro  two hours earlier, we’re now well into  a seven-mile hike to Polruan, a little town of steep, narrow streets clustered around a harbour inlet in the south of Cornwall. They aren’t seven straightforward miles, either: we endure a switchback path hugging an extraordinary stretch of Cornish coastline, tending up and down gorse-covered slopes. Only a smattering of sheep and the odd flutter of butterflies are within earshot of our gasps at the beauty of it all – and the occasional moan at what this taxing path is doing to our knees.

Sun-beaten, we can’t resist heading off  the path down a drop to Lantic Bay, leaving a trail of our clothes along a shingle beach as we take a bare-skin dip into the bitterly cold water. It’s just the tonic under the heat of the April sun, and, as for our knees, well by now they are as numb as the rest of us.

As we chip away at the miles, first-class scenery prevails at every turn. Bonding with three lazy cows upon a hilltop, we contemplate a contouring path ahead of  us and clap eyes on Lansallos Bay. Some drop from the cliff edge, it bears dazzling white sand, which meets a calm blanket of aquamarine. Now we’re especially glad we bothered.

Seven rewarding miles in the bag, we take our weary feet back to Polperro. Situated in a cliff inlet, the conservation village, with its jumble of cottages shoehorned into a steep valley, is a  heaven from the hands of Cornish fishermen. Through its twisted streets, we tread paths where barrows of fish were once carted and, under the cover of night, brandy casks  and tobacco bales  were carried into their hideouts. This was once  a thriving centre for the area’s smuggling, but while smugglers have since sailed into the town’s heritage, Polperro remains a working fishing port.
After soaking our aching muscles,  we mosey about Polperro’s quaint shops, low-ceilinged pubs and fine restaurants, the sum of which counts for Poperro’s nightlife. Take a pack of cards if you plan to stay out longer than 10pm, because by then, much of the place closes down.
It’s at this point we make a swift, £8 dash in a cab for Looe, a much livelier  port town 4km away.

Looe, Cornwall’s second-largest fishing village, straddles the river Fowey. The trawlers pull in their hauls by morning, for the local restaurants, and then run fishing charters for groups keen to cast  a line into the open sea.
We hop aboard the 12-metre fishing vessel, Swallow, owned by local fisherman, Murray Collings. He sports a tanned, weather-beaten face and has the calm disposition you’d expect of man whose  life has been spent at sea.
‘’The fish you eat in Looe is the freshest you’ll eat in England,’’ he boasts. ‘’You think about Scotland where fishermen are out weeks at a time, here they’re in and out on the same day and the fish on plate that night.’’ I can see how. Just 8km out, we hover over a shoal of mackerel and with my first cast I reel in five wildy flapping fish. We reel in more and more, saving Collings the trouble of collecting bait the following day.
It’s the least we could do, and a thoroughly exciting end to our weekend of adventure. 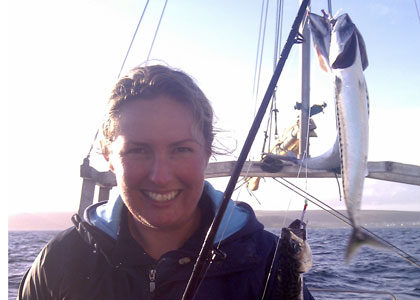 Where to eat: New Peking Garden Chinese Restaurant, Looe, is one of the few places open when all other eateries have closed.
Where to drink: Blue Peter Inn, Polperro is popular among locals and visitors alike. (thebluepeter.co.uk)
Where to sleep: See: rumplehorn-inn.co.uk £35 pppn or holidaycottages polperro.co.uk  £595  per week for two double rooms.

The Eden Project: Nestled in a deep crater overlooking St Austell Bay, one biome houses a rainforest and the other, a Mediterranean garden. The rainforest is so humid your glasses will fog up and beads of sweat will break out on your brow. More than 200m long and 50m high, it is one of the largest greenhouses in the world, containing tens of thousands of plants and trees from the South America, West Africa, the Oceanic Islands and Asia. There’s also a vertiginous viewing platform. The Mediterranean biome features cork trees, olive groves and a vineyard, plus organic food stalls dotted about the place. This is one cool charity project. See edenproject.com 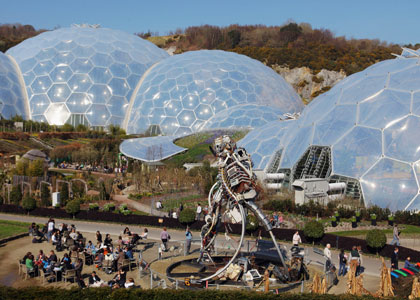 Hillsborough disaster will be debated after e-petition demand