An alleged terror plot against the pope has been uncovered and five men have been arrested.

The arrests were made in London early this morning after police received a tip off that a terror attack, possibly against Pope Benedict XVI, was planned.

The five men are all street cleaners in Westminster and would have been working close to the route planned by the pope today. All five are now being held on suspicion of the commission, preparation or instigation of acts of terrorism, although none has been charged. The men are all from Algeria.

Police received information overnight about a potential terrorism threat during the pope’s visit, according to The Associated Press, prompting the armed operation early this morning.

Officers are now searching a number of business and residential premises.

However, police are not convinced that there was a terror plot against the pope and are not yet sure if the tip that led to the arrests is credible.

“Following today’s arrests, the policing arrangements for the papal visit were reviewed, and we are satisfied that our current policing plan remains appropriate,” the Metropolitan Police said in a statement.

“The itinerary has not changed.”

The statement continued: “There is no change to the UK threat level.”

As the current official threat level in the UK is “severe”, this means that security chiefs believe a terror attack is “highly likely”.

However, the pope has remained calm in the face of a possible terror plot.

Father Frederico Lombardi, the Pope’s press spokesman said: “We have compete trust in the police. The police are taking the necessary measures. The situation is not particularly dangerous.”

Security is already tight around the pope’s planned route through London with a police bill topping £1 million.

Pope Benedict will also have his own security team of eight to 10 bodyguards who will flank his bulletproof popemobile, scanning crowds for potential threats.

Terror alerts aside, we’ve got to give the pope some kudos for his shoes. Love them. 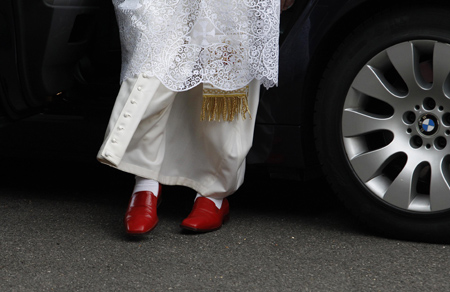 Book this: Savage Beauty at the V&A

Water-way to have a good time!