As the torrents make their way east to Brisbane, frightening stories are now emerging of the desperate struggle for life that played out in the stricken town Of Grantham. 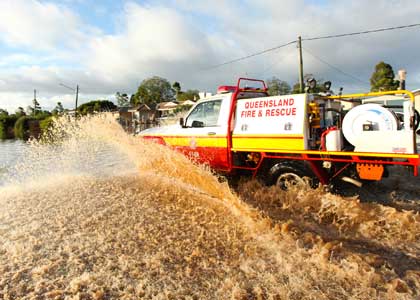 The death toll from the flood catastrophe has risen to 10, with 78 people still unaccounted for, after an 8m-high wall of water hit Toowoomba, west of Brisbane and surged down through the Lockyer Valley.

Brisbane’s residents are on edge as they wait for the Brisbane River to peak on Wednesday, when its expected 6500 homes will be inundated.

Many homes in the Lockyer Valley have already been destroyed. Grantham resident Les Schultz he heard screams coming from inside a house that was torn from its foundations.

Schultz said a friend who still lives in the town recounted the horrific moment when the pair met in nearby Gatton in the wake of the disaster.

“I met him on the street just after he got out by a helicopter,” the 68-year-old said.

“He said this home just floated past his house with people yelling out for help. But no one could help them.

“The house just floated past.”

Other residents have spoken of cars being carried away and dumped in piles in backyards.

Schultz, who lived in Grantham for 23 years but now lives several kilometres away, said he was thanking his lucky stars he sold up when he did.

“My property that I sold nine years ago is completely wiped out,” he said.

“My home I used to live in I believe would have had two metres or more water through it. I’ve never seen anything like it.”

Schultz said he believed the flood was worse than the one in 1974.

Landline phones and power remain cut in the town of just a few hundred.

“It would be the most terrifying experience I think the community has ever seen.

“The wall of water I believe was six to eight metres. (It) just came down the valley and literally just took people and their homes and some were in their cars.

“And they had no warning. It just hit like a tsunami.”

Three of the best tapas restaurants in London