The Queensland floods have forced authorities to enforce a massive power shutdown in Brisbane.

Lights will go off in the Brisbane central business district tomorrow morning in a shutdown of a magnitude not seen since the city’s catastrophic 1974 floods.

As the south east of Queensland drowns under raging torrents of water, forecasts indicate the Brisbane River will rise beyond the 5.45 metres seen in 1974, when at least 6,700 homes were partially or totally flooded in the Brisbane metropolitan area.

The Bremer River at Ipswich is expected to rise to about 18 metres by midnight (AEST) and peak on Wednesday at around 21 to 22 metres, above the peak of 20.6m reached in 1974 when 1,800 homes and businesses were flooded and 41 homes washed away.

Brisbane’s power grid will be shut down from 7am, sending 100,000 homes and businesses into darkness.

The drastic measure means virtually every business or home in Australia’s third most-populous city will be powerless.

Power provider Energex has decided to play it safe and before a rising Brisbane River peaks again tomorrow.

It fears a serious health risk would follow if its underground substations, many near the river, are inundated. 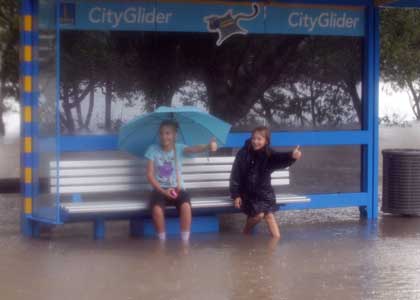 About 12 high-power substations that normally each surge with 110,000 volts will be turned off.

Energex crews intend to inspect the sub-stations after tomorrow afternoon’s peak high tide to assess the amount of damage and to determine the re-energisation timetable.

Power has already been cut off in Ipswich central business district and its inner-city suburbs, currently leaving 22,000 southeast Queensland properties without power.

There are also thousands more in flooded areas just outside the southeast, including Toowoomba.

Energex spokesman Mike Swanston said safety was the key issue and thanked residents for their patience while repair crews toiled in trying conditions.

“No one should never underestimate the old adage that power and water don’t mix, and as water continues to rise Energex will be taking a safety first approach under these extreme weather conditions,” Mr Swanston said.

“Similarly, as the weather worsens over night, power interruptions caused by winds blowing tree branches onto powerlines and other extreme conditions are expected to continue.”