Queenstown in winter: NZ’s adventure capital comes into its own with epic snowfall and even bigger nightlife

I’m next in line to jump and I’m sitting on the wooden floor, my feet tied together, shaking as I try not to look over the edge. Instead I try to focus on the spectacular mountains and the sun piercing the river below. Something tells me that his experience with sex is not unlike the bungy. A whole lot of nerves and high expectations – but over very quickly.

It is my first day in Queenstown, New Zealand, arguably one of the adventure capitals of the world. Even the flight was an adrenalin-junkie’s hit. As we descended into town, the downdrafts from the Remakables mountain range caused the plan to dip up and down, like a rollercoaster. Thankfully, the show I witnessed through the windows of ice-capped mountains and Lord of the Rings-style scenery, averted my eyes from the air-hostesses who literally bounced around the plane.

Queenstown is the temptress your parents warn you about. She’s dangerous, seductive, beautiful and if you’re not careful, she’ll have you spinning out of control.

The town, which is built around the deep blue Lake Wakatipu is famous for its adventure activities: mountain biking, jet boating, whitewater rafting and, of course, bungy jumping. You’ll spot the tourists easily, bungy protocol means you must have your weight brandished on your hand in red marker. The truly brave are marked like livestock cattle. 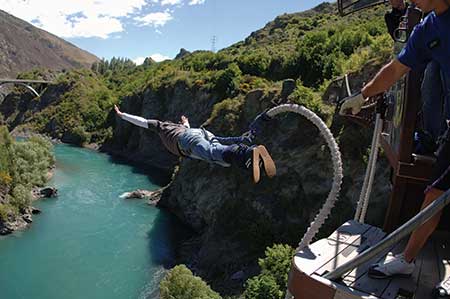 Lord of the high-flyers

While New Zealand may be famous for producing world-renowned wine and food, putting them amongst some of the most sophisticated regions of the world, Queenstown has a youthful energy to it, almost like a college town. The town is populated by the young and fit dressed in North Face snow wear, carrying snowboards with tussled hair and mountain-kissed pink faces. Walking around town it appears that the median age is 25.

It is no wonder that the daredevil adventures can be found on every corner and in every shop window.  As one Kiwi local tells me: “I guess we live on the edge of the world, so we treat life on the edge!”

The next day we’re off on a spine-tingling drive through Wanaka and up to Cardrona Alpine Resort. Although the Remarkables (“Remarks” as the locals say) are closer and more accessible, it’s Cardrona where the Kiwis like to ski. The snow is better, the runs wider and the crowds kept at a minimum.

On the plane to Queenstown I read about the legend of Cardrona’s bra fence. I ask our guide about the fence on the side of the road where it’s tradition for women to hang their bra. “Unfortunately the council removed the bras in 2006,” she says. “There were around 800 bras before they shut it down. The council thought it was an eyesore and a distraction for drivers.” Dismayed we drive on through the long and winding roads. The higher we get, the harder it is to see. 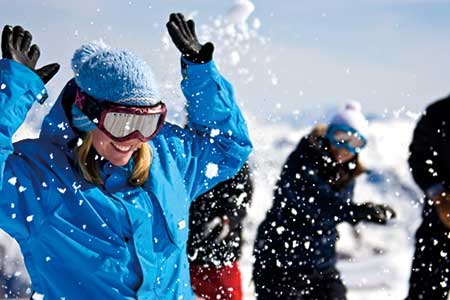 ‘Aotearoa’ is the Maori word for New Zealand, which roughly translates as ‘the land of the long white cloud’ and up here in the heavenly surrounds, the description couldn’t be more apt.

Although it’s September and approaching the end of the ski season, the snow hasn’t waned. When we reach the slopes I tell our guide that I’ve never seen this much snow before. “Really?” she asks me with a smile on her face. “I haven’t been up this season because we haven’t had a very good snow fall.” I look around in amazement, it’s white as far as the eye can see. Once we’re boarded up we wait at the chair lifts to be given the all clear by the snow officials.

We slide our boards along, making the first tracks of the day.  I’m not a very good snowboarder, by any means, but I spend the day with the Christmas carol, Walking in a Winter Wonderland in my head. The snow is so thick and powdery that my falls are cushioned and the turns I manoeuvre make me feel like I’m surfing in soft waves.

Meeting our guide at the end of the day, I tell her about the awesome “powder” I’ve been carving up. She laughs and says, “it’s so funny how you think this is powder. I go off-piste skiing up here and have been in snow so deep that I’ve been stuck up to my waist.” 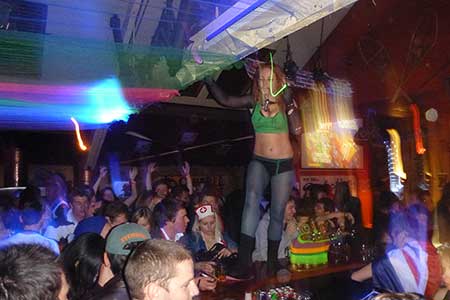 There’s a great mix of bars in the heart of town, dotted around the cobbled lanes. After a few après ski drinks, you could almost think you were in Europe. There are backpacker bars where you can get lost amongst a sea of twenty-somethings on an organised pub crawl. Or you can settle into one of the many wine bars where the fire is roaring and the ambiance is elegant.

We opt for the former, joining Big Night Out on their Saturday night pub crawl. This company are renound around town for their crawl, which quickly turns into a stumble, through some of Queenstown’s finest backpacker bars.

We begin at Altitude Bar where shots and drinking games await and then we’re whisked away to Revolver where, you guessed it, shots are greeting us as we walk through the door. I’m told there are three more bars we passed through but god knows if I can tell you their names. I fall out after the last one, greeted by the crisp air which brings some inkling of life back to my drained body.

The next thing I know I am lured into Fergburger for my second burger of the day. This place is legendary and at any given time of day – or night – there is a massive line of people hungry for New Zealand’s best burgers. The Chief Wiggum is a cheekily named pork belly burger which becomes my bedfellow for the night. 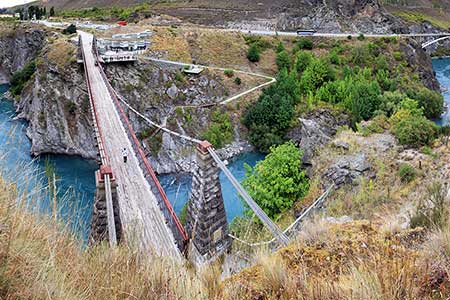 Queenstown has the highest bar-to-person ratio in New Zealand and it’s no surprise, given that what goes up must come down. After a day of not one, but two bungy jumps, alcohol was a necessity. You see I was coaxed into the first bungy almost through trickery.

I am taken to the Kawarau Bridge Bungy, the world’s first commercial bungy jump to participate in some people-watching. A few quick snaps of the brave and incredibly fearless people who are throwing themselves off the 45 metre bridge and our guide says, “well now that we’re here, you may as well jump.” Turns out, unprepared is best possible disposition.

Before I know it, my legs are tied together with rope and I’m standing on the edge of the bridge. I focus on the mountains ahead and tell myself not to do the unthinkable and look down. Sensing my fear, the bungy masters are kind and slowly count back from three before I stretch my arms out like Jesus on the cross and fall forward. The blood rushes to my head and I hold my breath, frozen in position, not even able so scream. Until – bounce – I reach the length of the rope’s tether and realise I have survived. It’s now time to scream and I do so for several minutes.

The best feeling about bungy is knowing that it’s over and that you’ve accomplished something that most people would never even attempt. I wouldn’t say its better than sex, but it’s the best piece of action I got in Queenstown.That’s one thing you can count on in the south island’s adventure capital – action is found on every corner of the town – you just have to pick your vice. 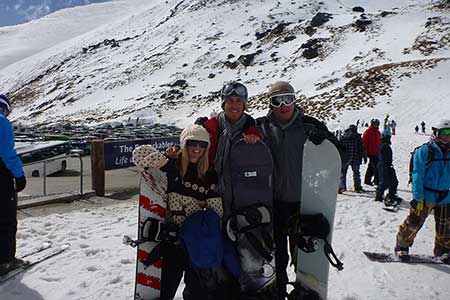 When to go: The ski season starts in early June and lasts until mid October although the areas typically stay open until the snow stops falling.

What to do: Jump the Kawarau Bridge Bungy with AJ Hackett Bungy  bungy.co.nz.Big Night Out do pub crawls every night except Sunday and Monday. $25 gets you entry and five drinks at five bars.  bignightout.net.nz 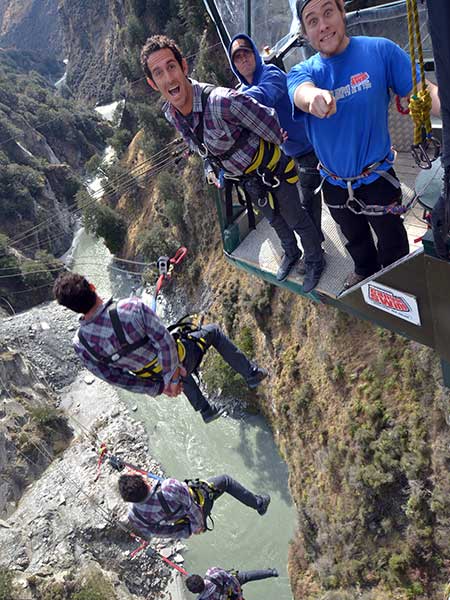 One experience that absolutely cannot be missed on a visit to Queenstown is the Shotover Canyon Swing. If you only have the funds to do one extreme sport (and you must do AT LEAST one), this is the one that trumps the rest.

The Shotover Canyon Swing has no elastic, so you experience true free fall for 60m followed by a 200m arc across the canyon. Exhilarating.

Remember that trust game, where you fall backwards and the person behind will catch you? It’s an exercise in learning to embrace vulnerability and ignore your instinctual urge to catch yourself. Now imagine playing that game over a 60m drop and you already have an idea of what the real experience of the Shotover Canyon Swing is.

Unlucky for you, the jumpmaster’s, who will lead you to the edge of a platform and help you jump off in absolute safety, love to take advantage of your vulnerable position. Expect to spend the last moments before your jump with your heart in your mouth and two guys laughing at the fear in your eyes.

Of course it’s all part of the fun, so rest assured that safety comes before their japes and you’ll be swinging across the canyon fully intact thanks to them.

There’s a huge variety of ways to jump off the platform, over 70 to be more exact, each one requiring a different level of cojones. Backwards, forwards, front-flip, back-flip or even the legendary ‘Indian Rope Trick’.

This last one will hopefully be the closest you ever come to dangling off an extremely high place, relying on your own strength to keep you from falling. Major muscles required, and expect the jumpmaster’s to play some mean tricks on you while you’re hanging on.

One jump will cost you NZ$199 and is well worth the money. When your adrenalin is fully pumped after your first jump you might be dying for another go, in which case each following jump will cost NZ$39.

Charlie Sheen thanks fans for support

David Walliams x-rated on Britain’s Got Talent, but Simon Cowell loves it