Rattling the cage with Joel Edgerton

Can actor Joel Edgerton shed his nice-guy image in his latest role as a martial arts fighter? TNT meets up with him to find out

Part of Joel Edgerton’s training for his new film Warrior, set in the brutal, macho world of cage fighting, involved learning how to choke someone out. ”So you’d better ask some good questions!” he warns with a laugh.

Looking tanned and relaxed in a grey long-sleeved T-shirt, jeans and a flat cap, it’s impossible to imagine the affable Australian ever lifting a finger against anyone. The only features that belie this friendly demeanor are his piercing blue eyes which give him a certain edge (no pun intended). It’s this mix of everyman appeal and laser-like intensity which helped Edgerton make the final four in the running to replace Matt Damon for the latest Bourne film.

Ultimately, he missed out to The Hurt Locker’s Jeremy Renner and admits to feeling gutted “about not getting to work with [director] Tony Gilroy”.

“Everything else I can put in perspective: the studio didn’t necessarily want to put their franchise on relatively new shoulders like mine,” he says. “But, look, maybe that will happen in the future with something else.”

He’s right to be optimistic. Since starring in David Michod’s Melbourne-set crime drama Animal Kingdom, the 38-year- old has been lighting up Hollywood’s radar like never before. The film has already catapulted veteran actress Jacki Weaver – who garnered an Oscar nomination for the role of Smurf Cody – into a Judd Apatow comedy, and Edgerton himself is now lined up for a string of high-profile films, including Baz Luhrmann’s The Great Gatsby (as Tom Buchanan), and The Odd Life Of Timothy Green opposite Jennifer Garner.

Before Animal Kingdom, he was best known for the smallish part of Owen Lars in the Star Wars prequels, so it’s ironic (?) an Australian film had more impact in bringing him to the attention of Hollywood bigwigs. “It really proved to me that a good movie is a good movie regardless of where it’s made and there should be no stigma about making local-made Australian movies,” he says. 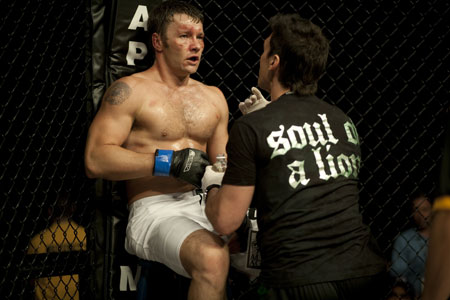 In Warrior, Edgerton plays Brendan Riordan, a Pittsburgh school teacher and family man who is long estranged from his alcoholic father and former Mixed Martial Arts coach Paddy (Nick Nolte). Brendan, a childhood MMA champ himself, takes up fighting again to earn his family some much-needed cash. Things get tricky when Brendan’s brother Tommy (Tom Hardy) turns up after a long absence looking to reignite his own fighting career with his father’s help.

It’s a taut, combustible family drama with cage fighting thrown in for good measure. Inevitably the two brothers square up against each other in some bone-crunching fight sequences. Edgerton had to undergo a gruelling 10-week training regime to bulk up his frame leaving him feeling “stronger than I’ve ever been before in my life … if I’d had to fight in real life I would have felt less nervous about it.” But it didn’t make him aggressive, he’s quick to add.

For all his nice-guy image, Edgerton is utterly convincing as a hard-as-nails cage fighter whose desire to win is fuelled by sibling rivalry and economic survival. He also had fun beating up Britain’s hottest new acting property, Tom Hardy. “He’s a chameleon, he brings an electric malevolence to he screen,” he says of his co-star. I tell Edgerton it’s disorientating hearing him speak in an American accent in the film, given that he spent his early career playing quintessentially Aussie blokes. “I have Arthur Fonzarelli and Richie Cunningham to thank for my American accent,” he laughs. “Watching all that American TV as a kid helped in tuning my ear.”

Edgerton was born in Blacktown, New South Wales, in 1974. After graduating from Nepean Drama School in Sydney, he jobbed in various TV and theatre shows before landing the breakthrough role of Will McGill in The Secret Life Of Us. He describes the show as “still one of the fondest memories of my working life” but he left early – his fans would say too early – to pursue a movie career.

Unlike his character in Warrior, Edgerton is close to his family and has worked on a number of film projects with his stuntman brother, Nash. “If I get more, you know, famous, in inverted commas, I’d love to drag Nash in,” he says sweetly.

These days he shuttles between homes in Sydney and LA.
I tell him he’s done well to keep a lid on his private life: there isn’t the tiniest morsel of gossip about him on the web.

“It’s funny people say that, but maybe it’s just a sign that I don’t have a personal life!” he jokes. 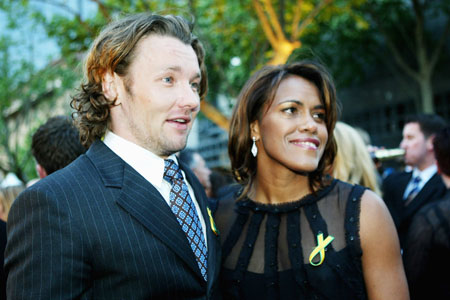 He dated Olympic gold medalist sprinter Cathy Freeman for two years. Did he get burned by all the press attention? “To be honest, it wasn’t even that intense; there was a lot of respect around that,” he counters. “I think if you invite the press into your life in that regard, you know what you’re in for,” he adds. “An actor’s personal life becomes more public if they start dating other actors.”

He’s single at the moment, he assures me. “I’m married to my career,” he says ruefully. The sacrifice seems worth it though. In The Great Gatsby, he’ll be working alongside the likes of Leonardo DiCaprio and Carey Mulligan, and he’s looking forward to working with Luhrmann. “I just think he’s special, a real maestro – he’s like a conductor keeping every instrument in mind – crew, actors, everyone.” Does he finally feel he has the momentum to achieve Hollywood stardom? “Without a doubt, more than at any other time,” he says “I can feel the wind at my back pushing me along.”