Review: PlayStation Vita – Sony’s latest handheld console gets the once over

While it can do about a bajillion other things, music, movies etc, it’s been unashamedly and rightly built with gaming in mind.

And though it can’t compete in the 3D stakes with Nintendo’s 3DS, that seems to me a bit like complaining that your lovely new flat hasn’t come with a puppy, sure it might be nice, but after a while, there’s the distinct possibility it might get pretty annoying and give you a headache.

Commentators were quick to question the release date of the Vita, to a post-Christmas West pretending to be loads less skint that they actually are, which in many ways is a shame, as it overshadows what is a substantial achievement.

Holding the Vita for the first time, I’m reminded of my very first games console, the Atari Lynx II; Vita, like the Lynx, are in one-way very similar: they are both sure to become gaming classics.

The first thing that strikes you about the Vita is its meagre weight. It sounds pedantic but at 260g the Vita isn’t just comfortable for thick man-wrists, such as mine, ahem, but will be comfortable for pipe-cleaner children arms too.

It’s an even more impressive feat when the size of the unit is taken into consideration: At 7.2 inches from end-to-end the Vita is the largest Sony handheld console to date.

Sony’s ubiquitous controls will be familiar to anyone who has picked up a Sony controller since the late nineties.

The Vita’s 5-inch 640×960 OLED touchscreen may not be as sharp as Apple’s retina display, but with a pixel density of 220ppi its still comfortably the best portable gaming console screen I’ve seen.

The screen isn’t the only snazzy bit of hardware the Vita wields; it also has front and rear-facing 0.3 megapixel cameras and a microphone.

The bottom of the unit has a dual 3.5mm headphone and microphone jack and a memory card slot.

The top of the Vita is where to find the volume buttons, PS Vita card slot, power button, and a peripheral slot.

The organs of the beast are even more impressive, the Vita has 32-bit quad-core CPU, and 512MB RAM, in addition to a three-axis accelerometer and gyroscopes for movement-based gaming options.

Connectivity-wise the Vita has all the usual gubbings you’d expect, WiFi (natch), Bluetooth (that you’ll never use), and optional 3G via micro-sim.

As for internal storage the Vita comes in 8GB and 16GB iterations.

The Vita’s battery life doesn’t compare favourably to the like of the iPad, although that comparison is slightly unfair, because while its five hours seem meagre in that company, they surpass the Nintendo 3DS’s four(ish) hours. 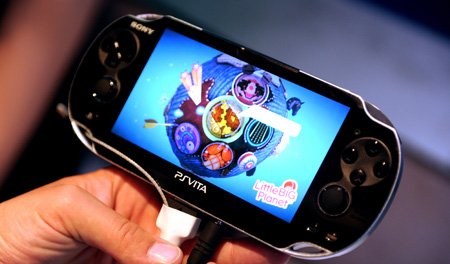 The Vita’s OS seems a tad incongruous compared to its design. While, thankfully, it doesn’t fall into the skeuomorphic trap, it is nevertheless noticeably, erm, cutesy.

Others have pointed out that this is probably due to two things: number a) it’s the same OS skin used on the Japanese device, where the cute design trope is far more common, and letter two) its desperately trying to avoid incurring the wroth of litigious electronics companies.

Aesthetics aside, the OS is perfectly workable, and most-importantly intuitive. The peripheral functionality, web-browsing, photos and media, are very much that.

The 0.3MP camera is unlikely to be the best snapper you’ve got on your person at any one time, and the process to get films and music you already own on to the Vita isn’t as simple as it could be.

Vita’s web-browser experience is surprisingly quite poor, there’s no support for flash or HTML 5, making in the browsing experience quite flat.

However, stand-alone apps for most of your web-faves, Facebook, Twitter etc, are well-implemented and work better than most mobile apps. 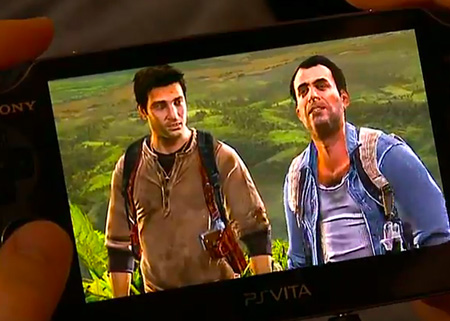 And low, finally, the most important bit: the gaming.

While loading times approach irksome lengths, once loaded you can pop in and out of games at will.

The first game I fired up was future racer stalwart Wipeout 2048, and the processing power soon becomes overwhelmingly evident. The pace and clarity of the graphics is like nothing I’ve seen on a mobile console before.

But it isn’t until I take on Unchartered that the true power and brilliance of the Vita becomes apparent.

How can I put this? I started playing the game, the next thing, it was four hours later.

Engrossing doesn’t cover it. I completely forgot I was playing the game on a handheld console, which I hadn’t realised, is basically the biggest compliment you can pay to a handheld.

I was just gaming.

Three years ago, I opted out of console gaming, I just couldn’t afford it. For people such as myself who miss console gaming but probably wouldn’t be tempted back into it until the newest generation of consoles hit the shelves, the Vita is a perfect substitute.

Mobile gaming has come on in leaps and bounds in recent years, and while the quality of titles available on iOS and Android is alway improving, there remains a chronic lack of the depth to the gaming experience.

Titles such as Angry Birds, fundamentally a really dull game, achieve astronomical success just by exploiting human addictive tendencies, and are consequently hailed the future of gaming by people who’ve haven’t been near a game console since their cousin’s had a Sega Saturn.

Casey Dellacqua blasts into the US Open last 16

A moment in time