Simmons’ Air New Zealand video – Fit To Fly – has become a hit on Youtube and, as is usually the case, it’s not necessarily for the right reasons.

The video, an attempt by the airline to spice up the ever-ignored in-flight safety demo, features 62-year-old fitness guru Simmons prancing around with a group of women who probably shouldn’t be wearing Lycra.

To the strains of Yazz’s 1988 hit The Only Way Is Up Simmons takes his flouro-wearing team through a string of safety procedures in the style of a cheesy exercise video.

Waving his arms around like an aeroplane, Simmons opens the routine with an exuberant: “In the next three minutes we’re going to work hard, work out and get you fit to fly.”

Other safety information is given in similar fashion.

“Grab, click, pull. Nice and snug, low across the hips,” Simmons declares during the seatbelt demo. “But not too tight!”

“If your oxygen mask drops down, it’s time to take a breather,” is another merry instruction.

Describing the emergency landing brace position, Simmons says: “Ok this is one of my favourites. It’s called the duck.”

And, if the worst comes to the worst and the plane ends up in the sea, keep in mind the image of Simmons in his sequined top and teeny shorts, instructing you to “blow and blow and blow” your life-vest. 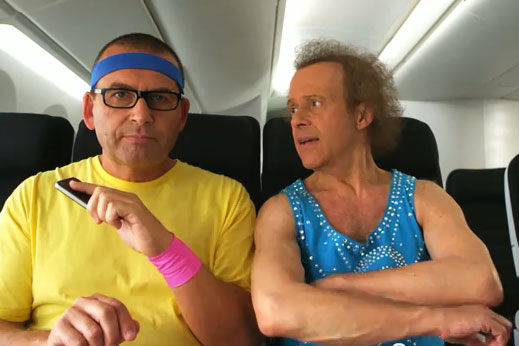 Reactions to the Air New Zealand video have been mixed.

luvs2fly wrote: “it would def. capture a passengers attention but I find it annoying lol.”

JackelMODEL said: “Kiwis have the best sense of humor.”

glory2die liked it too: “LOVE THE COMMERCIAL! man I think I’ll get a New Zealand flight! Amazing.” 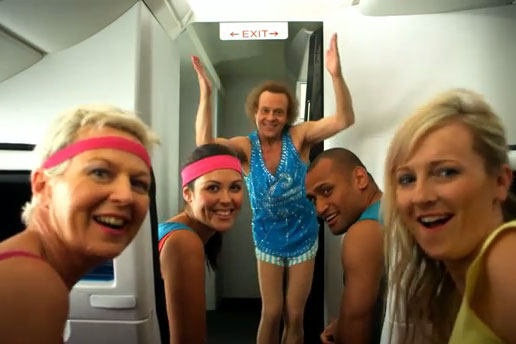 Richard Simmons with his Lycra beauties in Fit to Fly.

However, others have slammed the video.

xREEFERxMADNESSx agrees: “I have never seen a more pathetic ad in my life… this makes me ashamed to be a kiwi.”

atomantzthanks will also be giving Air New Zealand a miss, writing: “Thanks for the heads up. I’ll be sure to stay away from Air NZ.”

“Safety is paramount and non-negotiable at Air New Zealand, and Fit to Fly will again get our passengers sitting up and taking notice of these important pre-flight messages in an engaging and fun way.

Simmons’ fitness moves will definitely ensure that all eyes are on the safety briefing.”

Air New Zealand is making a name for itself with its attention-grabbing safety ads. Snoop Dogg rapped for the airline in the Youtube hit below.

Video: So an emu walks into a pub… that’s it