Ricky Gervais has been showing off the gold underwear that Ellen DeGeneres gave him on her talk show last week.

Gervais took on DeGeneres’ challenge, and wore the attire to The Golden Globes, taking a picture of himself in the tight golden pants (which features a bow on the front) on his Los Angeles hotel balcony as proof.

The picture of the chubby-turned-fit actor was then uploaded to Twitter by DeGeneres.

Here’s the picture of Ricky in his gold boxer shorts that Ellen DeGeneres posted on Twitter. 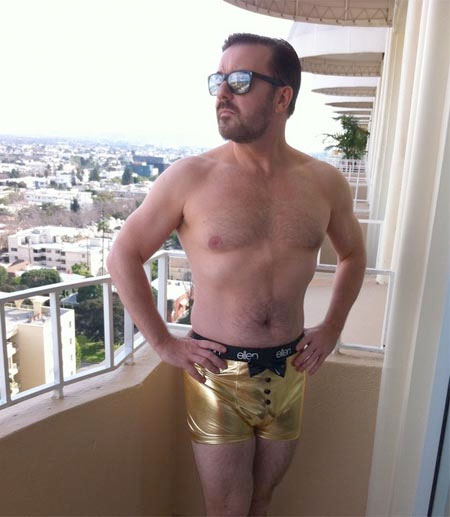 She tweeted: “Please enjoy this photo of Ricky Gervais in my underwear.”

But it’s not the golden pants, that most people seem to be interested in, but Gervais’ new trimmed body.

One of DeGeneres’ followers wrote: “I take it the bow is the package? 😉 He’s really trimmed down. Good for him.”

Gervais caused controversy when he was hosting The Golden Globes award ceremony on Sunday night.

His performance was labelled  “tasteless, bordering on nasty” by The New York Daily News and other newspaper called him “abusive.”

But in a statement released by Gervais he toned down the criticism:  “Everyone took it well and the atmosphere backstage and at the after-show was great.”

But there were also many viewers and celebrities who praised Gervaise’s Golden Globes performance.

The former Office-actor will appear on Piers Morgan’s new US talk show tonight.

And Morgan is hoping to see more of Gervais’s obnoxious behavior.

Morgan tweeted: “One thing I can guarantee – Mr Gervais won’t be offending me, whatever he does during our interview. More outrageous the better”.

Gambling Responsibly: Everything to Know

Carbon tax impact to be featured on NSW power bills