The Mail quoted several twitter users and Daily Mail message board commentators who were critical of the BBC’s coverage, with some raising concerns that there was excessive focus on the footage from the miners’ strike and poll tax riots.

The Mail was also concerned that BBC presenters were not all dressed in black tie out of respect for the former Tory leader.

Some were critical that speaking to Sinn Fein leader Gerry Adams was interviewed by BBC news just hours after Thatcher’s death was announced was in bad taste, given that the IRA attempted to assassinate her during the Brighton hotel bombing in 1984 that claimed five lives.

Adams said in the BBC interview “Working-class communities in Ireland were devastated by Thatcherism…her draconian policies prolonged the war here, she is most famously remembered for the 1980s hunger strikes.”

Wyre & Preston North Conservative MP Ben Wallace told the Mail “I think it’s disrespectful to give such a significant amount of coverage to a man who belongs to an organisation which tried to murder her.” 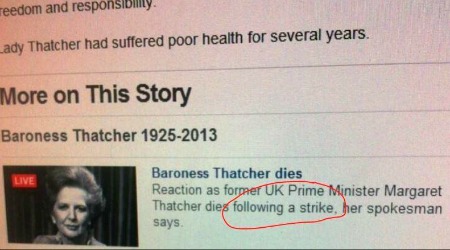 An unfortunate typo spotted on the BBC News website

“The death of Baroness Thatcher was a big breaking story of considerable interest to our audiences” said a BBC spokesman, responding to the criticisms.

“BBC News sensitively and respectfully reported the story as news of the death broke and continues to provide extensive coverage and analysis across TV, radio and online featuring a range of voices and opinions.”

Around 800 people took place in celebrating Thatcher’s death in street parties in UK cities, including in Brixton and Trafalgar Square in London, Bristol and Glasgow. More street protest parties are planned for the weekend, with police monitoring social media in the run up to the former PM’s funeral on Wednesday next week.

BBC 6 O’clock news is supine, cowardly and dreadfully biased journalism. A bit of balance would be appreciated.

I only ever watch Natural History programmes on #BBC Otherwise it is biased left wing crap. @bbcnews #Fail