Rock ‘n’ roll, drugs and death: Hit So Hard documentary shows how Hole drummer Patty Schemel lived through it all

Rock ‘n’ roll has had its fair share of casualties, not least the exclusive Club 27, including such famed and tortured souls as Jim Morrison and Jimi Hendrix, who both died three years shy of their 30th birthday.

Hole drummer Patty Schemel, who was part of one of the Nineties’ biggest bands at the epicentre of the alt-rock explosion, came within a breath of joining these ranks.

A new documentary, Hit So Hard, tells of how she brushed close to death but dodged its icy embrace to emerge as one of rock’s true survivors.

Schemel joined Courtney Love’s Hole in 1992, playing on their seminal Live Through This album, touring the world, and riding the roller coaster of success and excess that the band enjoyed.

Schemel’s own demons threatened to take her the same way, as she went from touring the world, playing to hundreds of thousands of fans, to winding up a junkie on the streets.

Hit So Hard came about when Schemel contacted a filmmaker friend about old video footage she’d shot during the band’s ill-fated 1994 world tour, worried it would disintegrate. 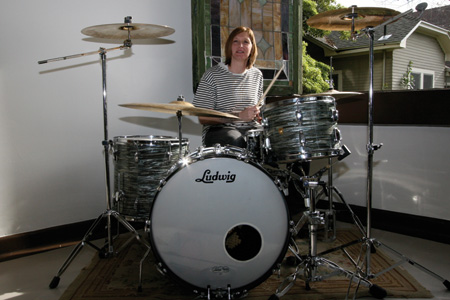 “I hadn’t seen it in years and had forgotten most of it,” Schemel tells us. ”It was like a weird time machine going back to some of those days.”

This footage birthed the movie, a document of Schemel’s experiences, framed by the larger picture of Nirvana and alt-rock’s flannel-shirted global takeover.

Where Cobain’s crew, Pearl Jam and Soundgarden dominated the scene, Hole stood out – a female band (save for guitarist Eric Erlandson) with a feminist riposte to rock’s ‘men-only’ predominance.

“I saw a drummer play at school and thought it looked cool,” Schemel remembers of the initial lure of getting behind the kit.

“It was a physical thing, which suited me.

And it was an instrument that I didn’t see a lot of women playing, so I was just drawn to it.” Indeed, her striving to subvert the norm saw her feted on the cover of Drum World magazine in 1995, the first woman to be so celebrated. 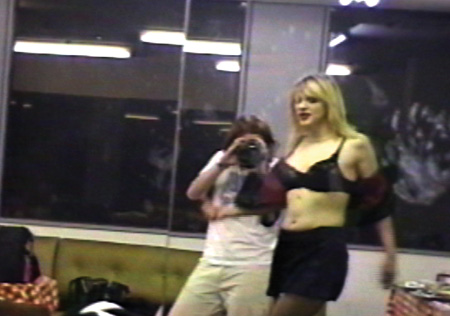 Hole’s first album, Pretty On The Inside, had won them a small fanbase, but follow up Live Through This exploded. Yet their time at the top was not a happy one.

“It was a strange and skewed time because of the fact that Courtney was married to Kurt, which was something that had its own life, and we constantly had to battle against it,” Schemel says.

“There was never any balance between our music and Courtney. I never really thought the band would be successful or would get beyond her success as ‘the wife’.”

She’d had her first drink at 12, the first step on a predictable path, starting with one-off experiments, and growing through weekend-only dabbles and every other day indulgences, en route to becoming a full-on addict. Several attempts at rehab followed, but none took.

“There were a lot of times where I was in and out ofrehab,” Schemel explains.

“I’d get clean to go out on the road with the band and then go back [on the drugs] when we got back. There were interventions – Courtney even had a catered intervention one day. I showed up and there was tea and sandwiches!”

Despite their narcotic-fuelled lives, Hole’s success continued to soar, but their crowning moment was halted by the events of 1994 – the suicide of her close friend Kurt Cobain and the death two months later of Hole bassist and fellow heroin-chic grunge poster girl, Kristen Pfaff.

“We all just continued,” Schemel recalls. “My thoughts were: ‘we have this record and we have to tour it’, so we threw ourselves into it. But feelings still creep out, and there were times when we would break down.

“There was a moment on that tour in Paris when this boy with a fanzine in his hand came up to us.

He was saying something in French and gave it to me.

Later that night I got Melissa [Auf der Maur, French-Canadian bassist who replaced Pfaff] to read it to me. It was an interview with Kurt, because during Nirvana’s In Utero tour he only did fanzine interviews.

The boy had asked about Courtney and Kurt said: ‘I won’t talk about my wife, but she is recording right now and she has this great new drummer – it’s going to sound amazing.’

Mel and I looked at each other – it was like a message from time and space. It was important to read and hear that.”

The band soldiered on and saw it to the other side. More importantly, Schemel got clean, but difficult recording sessions for the Live … follow up, Celebrity Skin, saw her ousted from the group. 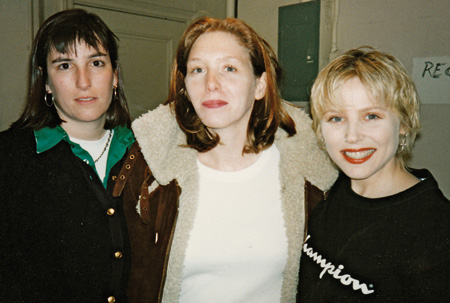 Schemel took it to heart, and the emotional betrayal she felt, in part, fuelled her return to drugs, which saw her wind up, strung out, on the streets.

That was until a single incident shook her from her stupor and helped her turn her life around.

“I was so distant from everything, but then there was this one moment when I was on the street looking through this church window.

I saw a drum kit and I had this moment of clarity, like, ‘I am a drummer’. And I pulled myself out of it.”

Today, Schemel plays with several bands and is happily married to Christina Soletti, with a two-year-old daughter. She also runs a dogboarding business and mentors at the Rock n’ Roll Camp For Girls in LA.

A reunion earlier this year of Hole’s classic line-up saw them play a short two-song, 15-minute set at Public Assembly in New York for the Hit So Hard release after party, and murmurs of a full time reunion are never far from people’s lips.

There is one thing that riles Schemel, though.

“I am from the school of punk rock ethics,” she says.

“Whenever there’s too much of something, something else comes along and knocks it down.

“I see a lot of women coming up in electronic music now, as you didn’t used to see a lot of female knob-twiddlers before, so that’s cool. It would be good to see someone playing their guitar and drums again, though.”

Hit So Hard – The Life And Near Death Story Of Patty Schemel is out theatrically Nov 16 and on DVD Nov 26 through Peccadillo Pictures.