There is a beautiful scene in the 1998 film Pleasantville where the townsfolk begin to feel emotion for the very first time and the whole place comes to life with bursts of colour. The little town of Sheffield in Tasmania a little bit like that.

After driving 90 minutes west of Launceston, through quiet winding roads looking at fields of green, dotted with white sheep and country houses we arrive in what is commonly known as the ‘Town of Murals’ and see colour so extraordinary, it’s as if this town in the middle of nowhere has come to bloom.

It was in 1986 when Sheffield, with a population of less than 2,000 people, painted its first mural. Since then, over 60 murals portraying the area’s rich history and stunning natural scenery have been painted on walls scattered throughout the town and buildings along the roadside. Now the town attracts over 200,000 people a year who come to be swept away by the colour and beauty on every corner. Almost every shop has a wall depicting one aspect of the town’s past.

With the inspiring Cradle Mountain looming in the background, you could say Sheffield has an artistic hold over all those who pass through. 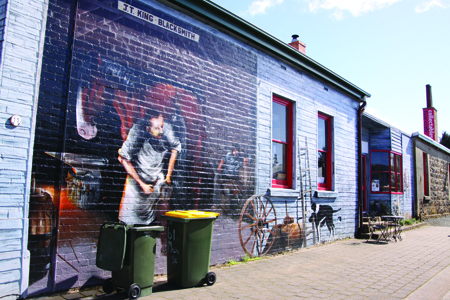 The peak of Cradle Mountain had been with us for some time, recognising it is easy. Its iconic shape is like spotting the Eiffel Tower when flying into Paris. Although it is named after its resemblance to a miner’s cradle, an old 19th century device used to separate gold or other heavy minerals from soil, from where I’m standing, the brilliant peaks come together like an old, jagged comb. Some even say it looks like a baby’s rocking cradle, but surely that is the eponym putting ideas in their heads (I sound like the repressed Mayor in Pleasantville).

Many of the buildings that lead to up to Cradle Mountain are made from dolomite which is taken from the mountain, so it’s almost like you’re getting a taste of the mountain before you arrive. This reminds me of the way the Spanish consume a whole pig, letting no hoof or offal go to waste. The heritage buildings we pass are like Cradle Mountain’s chorizo.

Not having time to do the Overland Track, a six day hike, (the whole hog, you could say) we opt for a day tour of the World Heritage area of Cradle Mountain National Park. We commence by doing the ‘Enchanted Walk’ a short stroll into the dens rainforest.

“Lord of the Rings was almost filmed in this area, but they couldn’t rely on the ever-changing weather,” our guide tells us. It could easily be the Forest of Fangorn with the Misty Mountains in the background, but as we know, leading lady Queenstown snapped up that role.

What was filmed here was a James Boags’ beer ad with a couple of kayakers who threw themselves off a gushing waterfall. No trick cinematography here, the men in the commercial actually cascaded over the edge in their narrow little boats. I’m pretty impressed by that.

At the base of Cradle Mountain we are presented with the magnificent, deep blue Dove Lake. There’s a 6km track that will take us right around the lake and beneath the towering spires of Cradle Mountain. Even though it’s spring, the peaks are dusted in snow and we’re told to be prepared for all conditions. The guide isn’t exaggerating, during the two hour walk around the lake, we experience wind, rain, a light splattering of snow and some sun.

The tour is completely self-guided (it’s not hard to get lost, even for directionally-challenged people like myself) so you’re able to walk at your own pace. This allows us to stop and take photos of the centerpiece and snack on the crisp Tassie apples our guide sent us packing with. 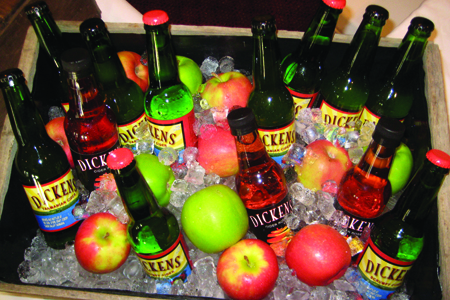 When life gives you apples – make cider, right? This could be the unofficial motto of Launceston, as I find out later that night. After a long day on the mountain, we arrive back in ‘Launie’ (as the locals call it), to go in search of the nightlife. We’re a little underwhelmed by the first pub we step into, as we are clearly the youngest people to step foot into it in years and our out-of-town aura attracts many a stare from people who look like they’re part of the  furniture.

The old Boags’ advertisements on the walls are almost like a walk down beer marketing history, but I can’t figure out if this is irony, or lazy housekeeping. We decide to move on, rather uninspired by the town’s atmosphere on a Friday night. That is until we stumble upon a tiny bar bursting with people. On the ghost-like main streets, this bar appears to be a mirage, so imagine our surprise when we walk in to find out that it’s a fully-fledged bar dedicated to cider.

Dickens Bar has only been open a few months but it’s got a strong fan base in town. The young blonde bartenders, who happen to be cousins, coax us into sampling the four ciders on tap. This isn’t your average cider, but then again, Tasmania doesn’t grow your average apples, it grows the country’s best. On tap at Dickens you’ll find pear cider, old English cider, cloudy cider and a cider made from Pink Lady apples mixed with Pinot Noir. I opt for the latter, which is stronger than I expect. Perhaps it was all the walking around Cradle Mountain I’ve done but it has me trolleyed.

John Dickens, one of the co-owners just happens to be sitting next to me at the bar and we chat about his business bottling apples.

“We’re a wholesale company who have made ciders for years and we’ve always loved doing the stalls at festivals,” says John. “Opening the bar just seemed like a natural extension of that.”

Looking around, the crowd seems very Sydney, lots of well-dressed hipsters with designer moustaches taking photos of their drinks with their iPhones, some of them are even playing the old board game Connect Four. It feels like I’ve stepped into a trendy Sydney bar. The only difference is, the lights are shining very bright – if this were Sydney, there would be dark mood lighting to hide our red-flushed faces, I think to myself.

“We actually hope to one day open a cider bar in Sydney,” John tells me, as if to read my mind. I tell him it’s just what cider-loving Sydney needs. Just remember to dim the lights, I suggest.

If Tassie has taught me something on this trip, it’s that we live a monochrome life on the mainland.

Step into the world’s largest dishwasher on Southbank