XXXX Island: A room with a brew

An island created by a beer company, specifically for beer lovers may seem like a beer lover’s wet dream, but on the southern Great Barrier Reef, XXXX Gold have made this a reality. The six hectare island, formally known as Pumpkin Island on the Capricorn Coast in central Queensland has been taken over by the ingenious beer company, and now goes by the name XXXX Island.

“This is not Club Med – it’s more Club Shed. We’re not offering up a five star resort, but rather one of the most perfect places on earth to simply kick back with nature and enjoy a beer with your mates,” says Anna McMillan, XXXX’s marketing manager.

In a clever piece of marketing from ‘Queensland’s favourite beer’, XXXX Island is only accessible by competition prize winners with each winner allowed to bring three mates. Therefore each weekend there will only be 24 lucky people living the good life.

As, Caroline Masterson XXXX GOLD brand manager explains, “The prizes are worth $10,000 but it’s not actually about the monetary value, it’s more about the bragging rights. We only have 1,000 consumers who get to experience XXXX Island every year so it’s very much money can’t buy experience.” 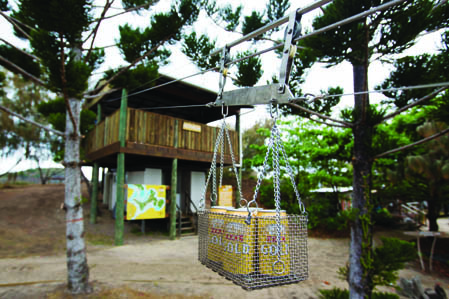 In what appears to be a world first, this ‘mate’s only experience’ was created when XXXX asked their beer drinkers what their ultimate fantasy island would consist of. Over 25,000 people voted on their personal favourite ideas and XXXX Gold put their tools to work.

Naturally, on an island created for beer lovers, there are no day spas but there are most certainly pool tables; there’s no room service, but fishing for your dinner is encouraged; and beer is served by a board short wearing ‘beer bulter’. The island’s pièce de résistance, the beach bar, overlooks the stunning reef and serves only XXXX Gold (“what else would you want?” asks Masterson).

Touches of ingenuity include the floating footy posts 20 metres off shore where mates can play a bit of beach footy, a one-hole golf course for the lazy golfer, a pully system that delivers you beer (for the lazy drinker), or my personal favouite, the ‘loo with a view’ – so you can release yourself with a beautiful view of the ocean (one-sided glass ensure there won’t be any stage fright.)

“We have also been busy fitting out the cabins which have slightly different themes,” says Masterson. “We have a fishing themed cabin, a footy cabin., we’ve got one called the house of rock which is a music theme and we’ve also got the motor shack. “

For those that think cabins are for the soft, there is also a camp ground, called ‘base camp’ which as Masterson says, “is located on the most beautiful part of the island, looking back to the mainland. Guests have the most amazing views of the sunset. It’s got these two large semi-permanent tents that are very safari style.” 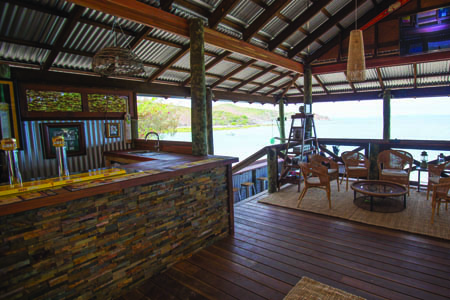 “These are ideas that our drinkers have had, they tend to be an ingenuous lot,” explains Masterson. “They certainly have thought of everything.

“But if there’s something they think the island is missing, we are open to evolve, we want to keep the island fresh,” Masterson assures.

If the ad campaigns are anything to go by, the island takes a very tongue in cheek approach to what men want on holiday. From billboards with men relaxing on the beach with their feet in foot spas made from Eskys, to the TVC campaigns of ‘real Aussie men’ hanging together in a land where “bean spouts and salads are banned,”

XXXX Island appears to be the ultimate man-cation.“XXXX Gold is a brand that doesn’t take itself too seriously,” adds Masterson.

But it’s not just for the love of beer, Capricorn Enterprise CEO Mary Carroll says the island has already injected hundreds of thousand of dollars into the local economy.

“This is the single biggest marketing campaign this destination has seen since Get Wrecked on Great Keppel in the 1980s.A thousand people each year, from all over Australia, who wouldn’t normally have visited the Capricorn Coast will be exposed to our area,” said Ms Carroll.

Carrying the XXXX Gold flag is TV personality Jules Lund, recruited as one the island’s ambassadors.

“It’s awesome to be a part of this fantastic campaign. I’ve been there and as far as islands go, it’s just about perfect. I’m looking forward to working with this great group of ambassadors to help tell Aussies how they have a chance to get themselves to XXXX Island,” said Lund.

The island was bought by John and Sonja Rumble in 2003 for $1.3 million, and they gave it to their son Wayne, for his 27th birthday. He now runs it with partner and views the XXXX Island stunt as a “great opportunity for the island that will only bring more people to the area”. Rumble ensures that XXXX will respect the eco-friendly nature of the space.

“We’re all about the sustainability – a lot of the power is brought from solar,” says Masterson. “We’re conscious of maintaining the environmental integrity of the island so all of our water is from enactments, from rainwater. We’ve got a couple of generators as back up but we want to rely on the natural resources form sun, water and wind. Part of the appeal is, at the end of the day, you’ve got this perfect location on the Barrier Reef, but you really want to showcase it and ensure that people respect the island too.”

But surely an island full of testosterone, competitive sports and an endless supply of beer is a recipe for disaster?

“Well it’s a mid strength beer, so it’s lower in alcohol and we serve it along side water and non alcoholic beverages. For us it’s very important that we’re being responsible with consumption and we need to comply with RSA as would any venue back on the mainland. We’re very conscious of that and we want to promote responsible consumption. So far, so good.”

Album review: The Features – Some Kind of Salvation