Rocking the boat in Dubrovnik: Island-hopping, cruising and swimming off the coast of Croatia

There are two ways to ‘do’ Dubrovnik.

The first is to head out to see the Old Town sights in the morning, walk a circuit of the stunning medieval walls, admire frescos in the old churches and wander the cobbled streets licking ice creams.

Which is all very nice, sure, but you’ll have to share the experience with at least 5000 other tourists – and Dubrovnik’s not a big place.

The picturesque city is hugely popular as a cruise port, and when the ships dock in the morning, it can feel as though you’re drowning in a sea of stampeding holidaymakers.

So go for option two: leave your sightseeing until the late afternoon, when they’ve all been herded back to their ships.

In the meantime, make the absolute most of the sparkling, warm waves of the Adriatic Sea by taking one of these terrific boat trips. There’s no better feeling than pulling on your swimmers, climbing on board a sexy speedboat and enjoying the spray of the sea and heat of the sun while someone else does the driving – in this case, it’s around the Elaphiti Islands.

This archipelago northwest of Dubrovnik consists of four main islands: Sipan, Lopud, Lokrum and Kolocep, plus a few dozen other smaller ones.

Depending on what kind of trip you’re after, most tour companies will allow you to mix and match stops at all or just some of them.

Sipan is the largest of the islands, and particularly lush with olive, fig and orange trees growing across it.

If you like here so much you don’t want to leave, you can stay overnight in one of the two fishing villages on the island – Šipanska Luka or Sudurad.

Both are far quieter and less touristy places to stay than on Dubrovnik’s mainland.

Lopud is a much smaller island, at only 4.6 square kilometres, but it’s inhabited, too. 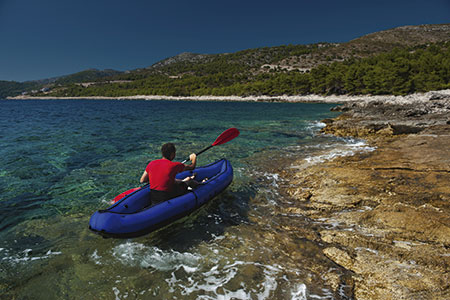 Most people stop here to spend a few hours on Sunj beach, which is one of the only sandy stretches in Dubrovnik (most of the beaches are too pebbly to lie about on).

If lazing in the sun isn’t your thing, there are heaps of winding, easy-to-follow forest paths here for a little light trekking.

As for Lokrum, it’s also extremely pretty, but completely uninhabited these days, unless you count the families of peacocks that wander the island.

There’s also a 15th-century monastery and well-preserved botanical gardens to explore while you’re here. Finally, don’t miss out on a stop at Kolocep.

The island’s Blue Cave is a must-see, named because it illuminates swimmers with an electric aqua light.

The water’s chillier inside but it’s fine to paddle right into the cove to get the full effect.

There are lots of other caves to explore on the south side of the island, too.

But no matter which of these spots you take in on your tour, make sure you also ask your boat driver to drop anchor somewhere far out to sea, where you can swim and snorkel as much as you like without another tourist in sight.

Do it: Try Dubrovnik Boats for an Elaphite Islands Tour. Prices on request. 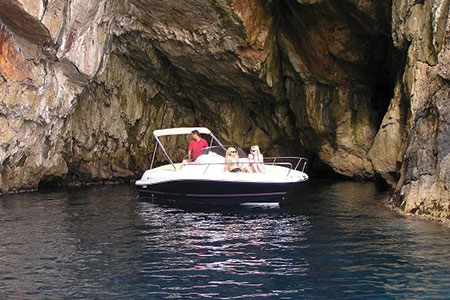 The bearded captain claims to have built it himself, but considering he also brings a stuffed parrot and oversized pirate hat along on each journey, it’s hard to take him seriously.

You can book this whole boat out with your mates for two-hour dusk cruises.

These set sail along the coast of Dubrovnik as the light fades, and go past the historic city walls – this is probably the best vantage point from which to appreciate their full scale.

The cruise also passes the magnificent Fort Lovrijenac, which fans of cult TV show Game Of Thrones will recognise as King’s Landing from season two.

Alternatively, book a full-day ticket on the ship to explore the Elaphitis.

Do it: A nine-hour cruise stopping at Kolocep, Lopud and Sipan, including a fresh seafood lunch with wine, costs £35.89pp through Viator.

Dusk cruises can be booked through Elite with prices on request.  elite.hr; viator.com 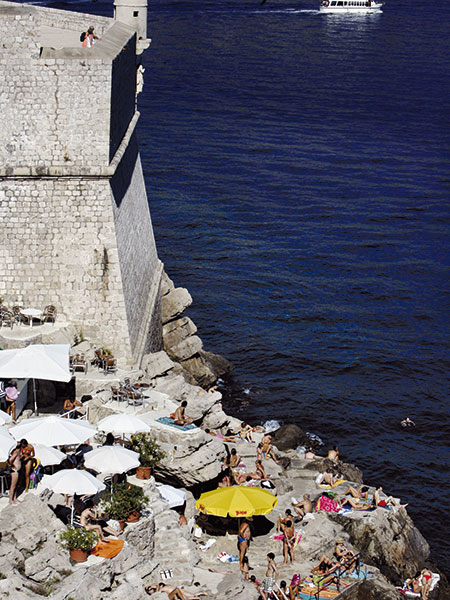 Kayaking on the coast

If you feel the need to work those muscles after so long spent sprawled out on boat decks, go for a paddle off Dubrovnik’s coast.

This is the perfect chance to explore the more off-the-beaten-track coves, miniature islands and secret bays that most tourists don’t get to see.

Adriatic Kayak Tours runs a half-day, 8km trip that takes you to Zaton Bay, which is just 10km north of Dubrovnik.

A deep bay, surrounded by mountain ridges, it has calmer waters and is less windy than around the Old Town (although many do choose to kayak here anyway).

Taking a kayak out here means you get to see an old stone mill with bubbling underground springs and Renaissance-era stone villas.

Alternatively, if you’d rather stick around the Old Town part of Dubrovnik, you can also hire just the kayaking equipment and take yourself for a paddle off the coast – it’s often choppy here but there are terrific views of the mainland to be had from the water.

Do it: Adriatic Kayak Tours’ Zaton Bay and Beyond tour is  £30pp and includes snorkeling and cliff-jumping.

Rent kayak equipment from them for half a day for £21pp. adriatickayaktours.com

Want to see more of the Dalmatian coast? Then spend a week on a cruise ship doing just that.

On The Go Tours runs an eight-day package, Cruise Dubrovnik, that stops off at Mljet Island National Park to see the salt water lakes in Trstenik on the Peljesac Peninsula and indulge in a little wine-tasting, and at Korcula’s medieval Old Town.

Naturally, there’s also the chance to get stuck into the wild nightlife of the harbour town of Hvar.

If you book off-season (outside July and August), you don’t even have to worry about those pesky morning crowds when you’re in Dubrovnik either, so you can see the city when it’s quiet and ripe for exploring.

Do it: An eight-day Cruise Dubrovnik tour costs £389pp.  onthegotours.com 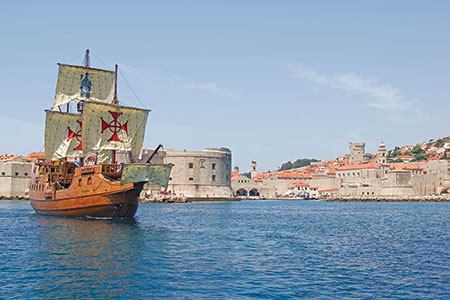 Best of the rest: Dubrovnik by land

Once you’ve made it back onto dry land, here are the unmissable activities that no trip to Dubrovnik would be complete without …

Got a head for heights? Take the new cable car to the top of Srd Hill.

From here you can appreciate the full intensity of Dubrovnik’s colours – the rich greenery of the hills, the iconic orange roofs and deep blue of the Adriatic Sea.

The ride is smooth, and when you get to the top there are enough dazzling, 360-degree views to keep your head spinning – on a clear day you can see up to 60km.

There’s also a great cafe at the top to while away an hour or so in. dubrovnikcablecar.com 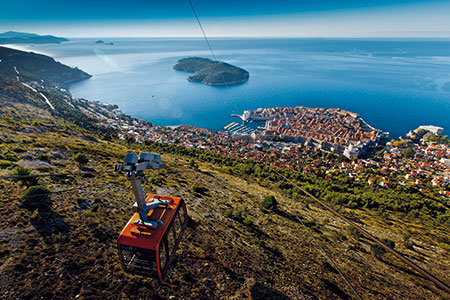 If you do nothing else of historical interest in Dubrovnik, at least make time to walk the 2km circuit of the medieval battlements.

These date back to the 13th century, and include a series of forts and towers – perfect for climbing inside and taking that classic view-through-the-window snapshot of the sea.

Around every turn is a fresh view of the Adriatic and the city.

A pass to the walls costs £5.50, which is money excellently spent. tzdubrovnik.hr

In Dubrovnik dialect, buža means ‘hole’ (not boozer). The buza bars are two drinking hotspots that are actually found right in the nooks and crannies of the city’s ramparts.

Rows of chairs and tables are perched a little precariously on the natural ledges, giving visitors an unbroken view right out to sea as they sup a beer or two.

There are two of these inside the Old Town, both of which can be reached by taking the steps up to the southernmost wall and following the painted signs.

One of the buzas is considered for locals only, but no one will stop you going in if you want to.

The other, called Cold Drinks Buza, is open to one and all. cafebuza.com

Fly Monarch direct to Dubrovnik from London Gatwick from £72.50 return.

Pastafarian wins right to win wear sieve on his head

Backpackers to be tagged?

Two European capitals in one trip