Yet despite the switch in format, the tournament ends with the same four teams who contested the semi finals in 2008.

Here’s how they got to this point:

The World Cup holders New Zealand had no trouble against over-acheivers Scotland in Friday’s quarter final against Scotland with an eight-try win at Headingley in Leeds.

Alex Hurst was the only scorer for Scotland and will leave the tournament proud where they’ve made it to.

New Zealand began their campaign to meet England with an Issac Luke try, but that was given a red light by the video referee, but the South Sydney hooker’s break led to Bryson Goodwin’s claiming the first of the game in the corner.

Went over Bromwich soon after and after 20 minutes a third was added through Tuivasa-Sheck accepting a good ball from Keiren Foran.

Then crossed Pritchard, who will be fired up to make the final after missing the party in 2008 through injury.

A restart then made it to Sonny Bill Williams whose ball put Johnson away to make it 26-0 at the break.

In a bizarre try, Tuivasa-Sheck caught an attacking kick from Scotland’s Kane Linnet and ran the field to score.

Vatuvei could have had three in the game – after one spectacular break was only stopped by his own player running in front of him and another narrowly disallowed, but he had one given moments later.

Danny Brough’s 40/20 gave Scotland the field position they needed, London Bronco Hurst got them on the board.

The Kiwis weren’t finished though, with Goodwin adding his second with a leap from a Foran kick.

Brett Morris and Jarryd Hayne became the fifth and sixth Australians to cross for four maximums in a World Cup during Australia’s predictably comfortable win over USA in their quarter-final in Wrexham, Wales.

Australia lost Billy Slater with a knee injury in the match, but have plenty of talent to back him up going into the semi final against Fiji.

Hayne’s first came within three minutes and the USA weren’t given respite as Inglis scored after 11 minutes.

The Australia scored three in lightening succession, through Morris, Smith off a Gallen offload and then Slater sent Morris over for his second.

Inglis laid on Morris’s hat-trick and he made it four before the break from a Cronk kick.

Slater left the field two minutes into the second half after taking a high ball.

With the USA never giving in, the Kangaroos kept pressing, and Inglis barged over for his second on 50 minutes, before Hayne took centre stage with three more in the closing stages.

An impressive tournament from the USA nonetheless, making the knockout stage in their first appearance. 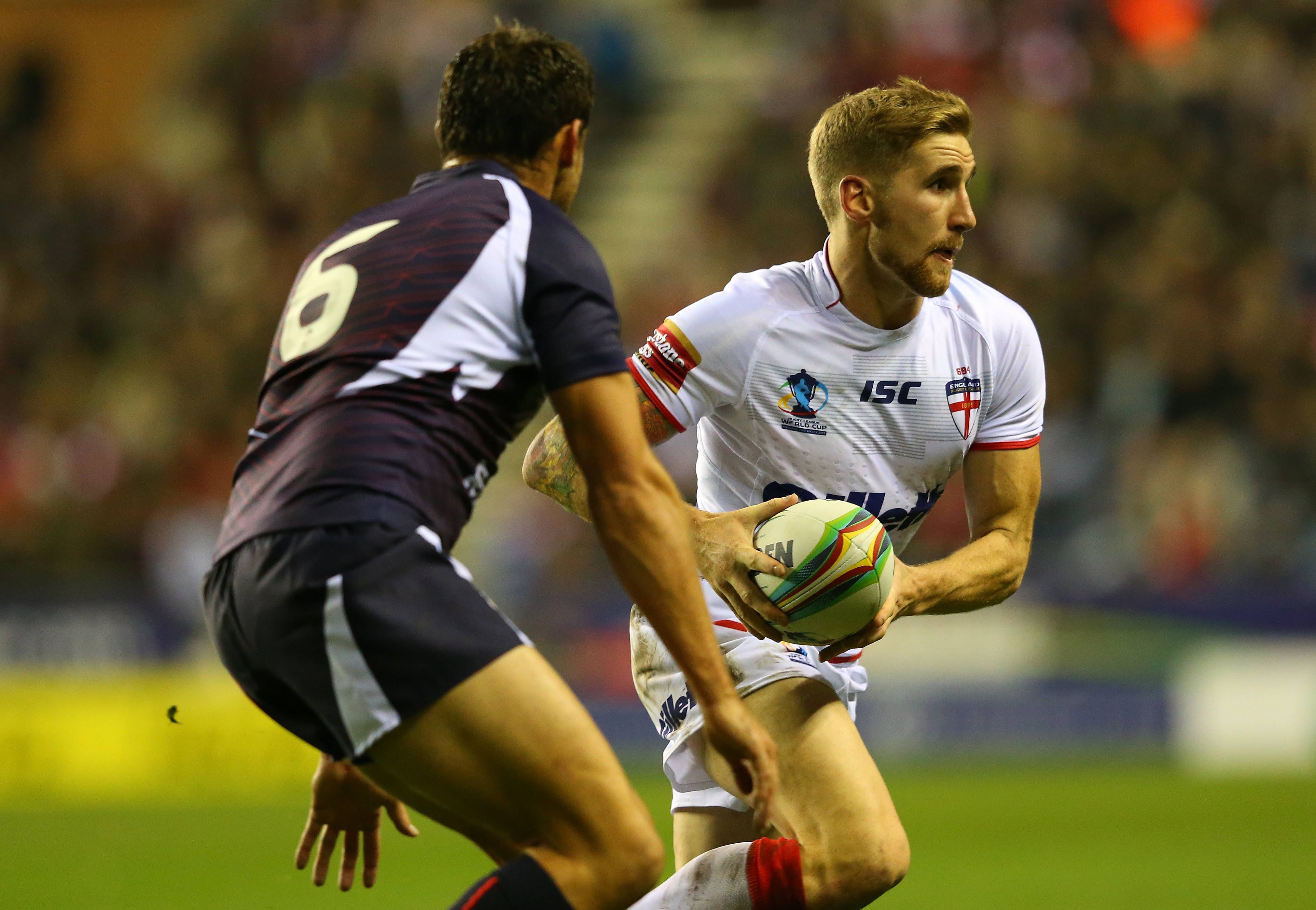 England set up their semi-final with New Zealand with what ended a straight-forward victory over France, but it was the underdogs who went over first at Wigan through Vincent Duport.

But the hosts hit back almost straight away through Josh Charnley, who along with Ryan Hall scored two tries in the match, to England’s 22-6 lead at the break.

Sean O’Loughlin and Brett Ferres added tries at the break and conceded no more, but made it clear after the game that they’ll have to be better against New Zealand and, should they win at Wembley, Australia (or Fiji).

France only made the quarters via a 9-8 win over Papua New Guinea and had been disappointing but put up a fight at times against patchy England.

A break and offload from Sam Tomkins set up England’s first, fitting given he’d been given a second chance to farewell Wigan’s home round before he goes to the New Zealand Warriors, setting his former teammate free down the right flank.

Hall then got job from Tomkins, who won man of the match.

Charnley then got his second before Hall also got his duo and his eighth for the tournament to make him the leading try scorer.

O’Loughlin was typically direct barging over for his try.

The match ended on a low note for Tomkins, who was sin-binned for a professional foul with eight minutes remaining.

England were still able to add to the scoreline though, through Ferres with some slick work. 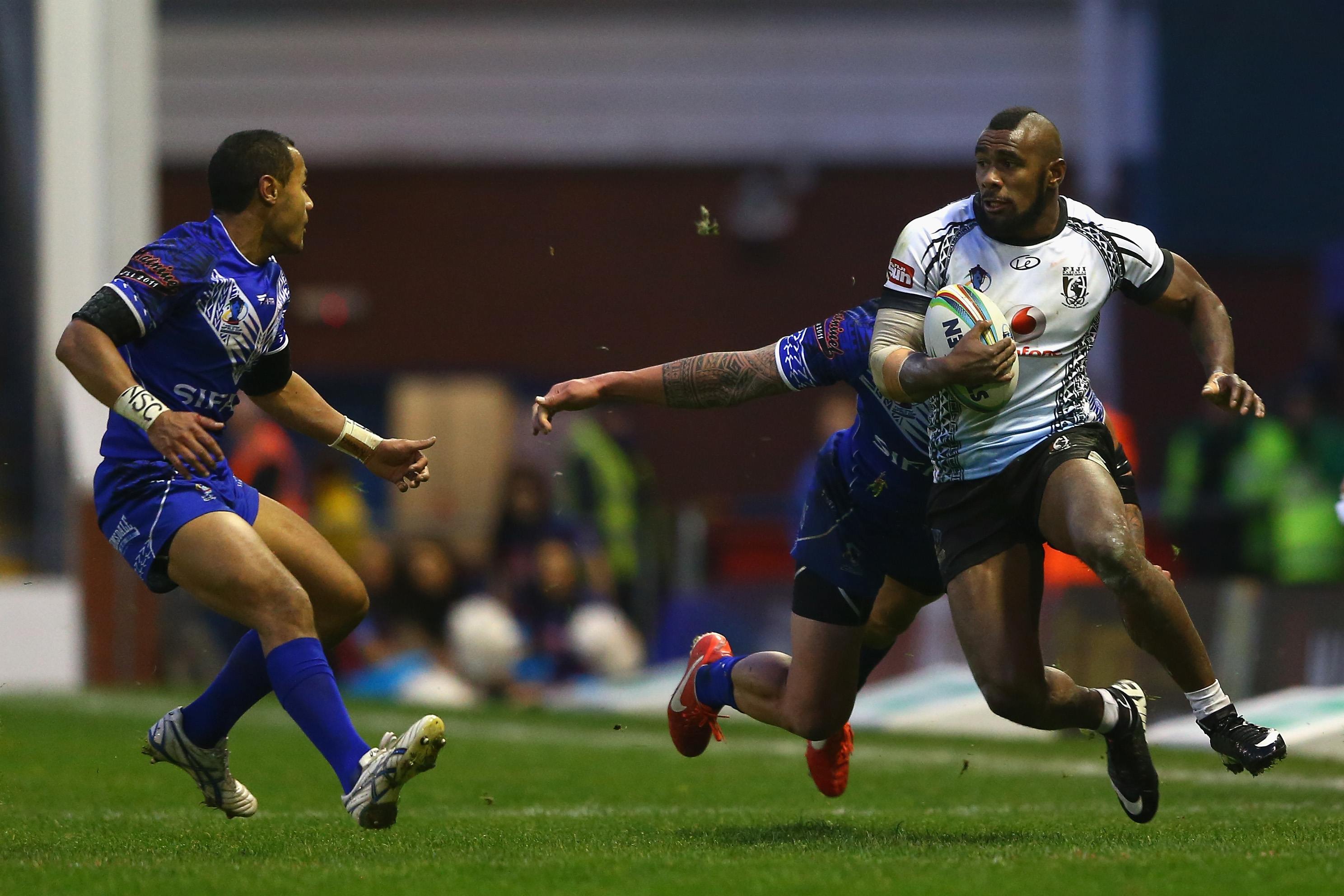 Fiji set up the unenviable task of taking on Australia, again, for a spot in the final with a strong win over Samoa over Warrington.

Points came from Aaron Groom and Wes Naiqama tries in the first half and Vitale Junior Roqica in the second, while the older of the Naiqama brothers was on target with the boot, kicking all three conversions and two penalties.

Antonio Winterstein was the only try scorer for Samoa

Fiji won’t be scared of Australia, having met them already in the group phase and in the last semi final. But the results haven’t been ideal, a 54-0 loss in 2008 and 34-2 the same way here.

But Sunday was their day as they came out on top in a bruising tussle.

The first try came from an Akuila Uate break before Samoa lost Manumalealii, their lynchpin at halfback, through injury.

Naiqama picked up a loose Groom kick next that somehow evaded the Samoa defence.

Samoa found their only points on 58 minutes through Winterstein in the corner.

Fiji reinforced control 12 minutes out when Samoa were penalised for a high tackle and Naiqama added two more, and Roqica got on the end of another sharp more.

Petero Civoneceva’s career extends by one more game, as the legend prop has announced he’ll retire at the end of the tournament.

Semi-final fixtures for The Big Hit at Wembley

Time to boast about gold goast – fun in the sun and handstands in the sand!!

Mean spirited: Man fined for pretending to be a ghost