Russell Brand and Katy Perry married in the Indian jungle at the weekend but had to spend their first night under armed guard after a man-eating tiger invaded the wedding camp.

The couple tied the knot with a traditional Hindu ceremony on a luxury resort in the middle of a tiger reserve. Both Katy and Russell wore Indian dress.

According to reports, the wedding included 21 camels, elephants and horses as well as 85 of the pair’s family and friends. 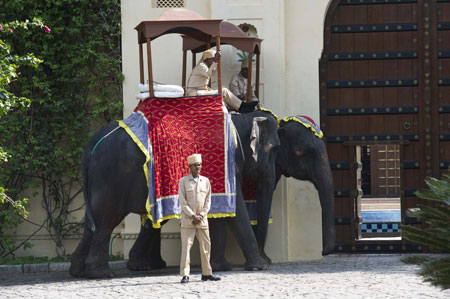 A spokesman for the couple said: “Russell Brand and Katy Perry are overjoyed to confirm that they were pronounced Mr and Mrs Brand on October 23.

“The very private and spiritual ceremony, attended by the couple’s closest family and friends, was performed by a Christian minister.”

However the couple’s wedding night was scarier than planned when a dangerous tiger, which has killed three people in the past two years, jumped two walls at the venue and had to be beaten away by guards as it tried to leap over a third wall just 50ft from the newlyweds.

Animals featured strongly in the flashy wedding ceremony, with Russell buying Katy a female tiger as a wedding present. The Bengal tiger, named Machli, will stay living on the nature reserve however, and the money used for conservation schemes.

Katy, meanwhile, bought Russell a baby elephant, which likewise will not be travelling home with them.

According to insiders, the wedding also featured a fortune-telling parrot which predicted a long life, long marriage and long and successful careers for both bride and groom.

Pass us the sick bucket! 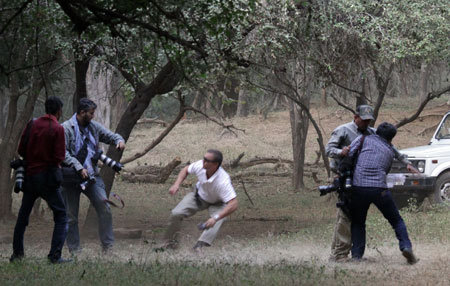 There had been fears that the wedding wouldn’t go ahead at all after Russell’s minders had a scrap with photographers trailing his pre-wedding safari adventure with comic David Baddiel in Ranthambore National Park.

Russell was threatened with questioning by local cops which would have prevented him going to his own nuptials.

Russell Brand hands himself into police over iPhone pap incident