Saddle up for Delta daze

My head is pounding, my legs are weak and my face is a lurid shade of red. It’s not the first time I’ve been in a sorry state while exploring the backwoods of the Mekong Delta. Usually, however, the malady only occurs when equally intoxicated Vietnamese gentlemen accompany me and there’s a clutch of discarded rice wine bottles lying beneath a Lilliputian plastic table. It isn’t the demon booze that ails me this time, though. It’s the fact that I’ve just pedalled 46km and the locals manning the rest stops in this, the most densely populated area of Vietnam, appear to have downed tools for the afternoon. I don’t blame them.

The temperature is pushing 40˚C and the only other cyclists on the road are occasional groups of young children pottering leisurely home from school, the boys in spotless white shirts and the girls in traditional ao dai.  Wobbly looking foreigners on long-distance bike rides are a bewildering and amusing anomaly here at the best of times, and especially so in the searing pre-monsoon heat.

According to my guide Chinh, there are only a few more kilometres to go before we pick up the sampan that will ferry us down the Mekong to the town of Vinh Long. There, a minibus will be waiting to usher us into air-conditioned relief and transport us to the city of Can Tho, where we will spend the night. The task ahead is as appealing as an evening spent pressed against the speakers in a Vietnamese nightclub.

A little further down the road, we finally strike liquid gold. The lady manning the café doesn’t look chuffed to be budged but she manages to rouse herself sufficiently to present us with a round of drip-filtered ice coffees and chilled water. Her job done, she sidles back to one of the café’s many hammocks. All of the other hanging beds are also occupied.

“Mekong people are so lazy,” Chinh says as he drains his coffee, sparks up the latest in a long line of Craven A cigarettes and settles himself in his own suspended snoozing sling. “They’ve got so much here already they don’t have to work that hard.”

A lush landscape of emerald green fields, shady woods and sleepy villages, criss-crossed by canals and rivulets fed by the mighty river, the Delta is Vietnam’s land of plenty. Formed by sediment deposited by the Mekong, the area is one of the most fertile and productive in the world. Fruit, fish and fresh produce are abundant, and three rice crops per year yield enough grain to feed the entire country with a sizeable surplus. Contrast that with the two crops, often only one, yielded from the Red River Delta near Hanoi – Vietnam’s other major rice-producing area – and you get an inkling of why northerners especially often view the people of the Delta as feckless.

Many Hanoians get envious at all this easy living but most visitors love the languid pace. That’s why I’m lying here in this hammock thanking the guardian angel of chunky cyclists for guiding me to my ice-cold bottle of water. 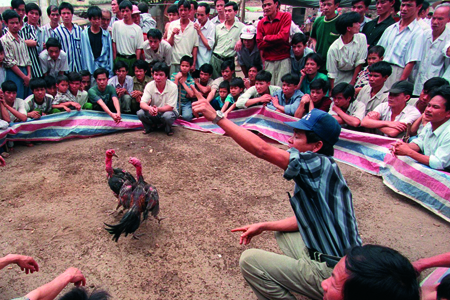 Careless brushes with dehydration aside, the Delta offers fantastic scope for exploration by bicycle. It is pancake-flat, making it easy to negotiate, and its back-country network of waterways, quiet lanes and traditional villages are a world away from the nation’s more frazzling attractions.

This is the second time I’ve biked it around the region. Last time around I was here with my mother who was visiting me in Vietnam for a three-week holiday. The route stuck almost exclusively to back-roads and narrow tracks barely wide enough to let two bikes pass in comfort. Emancipated from the scourge of the Vietnamese highway – the fume-belching, horn-honking truck – we were able to ease into the rhythm of rural life.

The cycling was special enough, but it was the little events along the way that really made the experience. Stand-out memories include stumbling upon a cockfight in a dusty backyard and an impromptu karaoke session in a bar by the Mekong. This time, though, I’m on my own.

First, though, I need to get out of Ho Chi Minh City. Vietnam’s southern hub can be a charmer, but not when you are trying to escape it by road. The urban sprawl drags on for miles. The road is packed with stoic-faced motorcyclists and those devil trucks I mentioned earlier, and the highway is lined with auto-parts shops and grimy-looking eateries serving delicacies such as thit cay (dog) and chao long (rice porridge with innards).

Eventually, the ugliness subsides and swaying coconut palms and sparkling waterways signify the arrival of gentler territory. The Delta proper starts when you encounter the first branch of the Mekong at My Tho. We unpack the bikes and wave a wistful goodbye to the driver outside the city. I’ve opted for a two-day tour this time, so we’ll be cycling 50km each way on the road between My Tho and Can Tho. 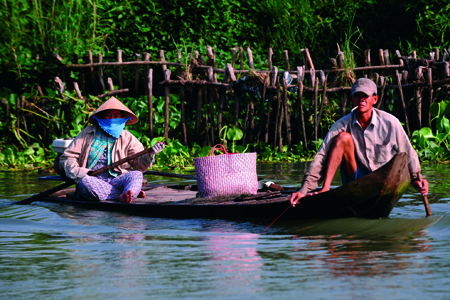 The first day starts, as it tends to, with a degree of misguided enthusiasm. Chinh already has a cigarette fixed in his mouth, so I race ahead greeting the frequent cries of salutation from passing kids. Luckily, I calm down a little by the time we hit the 20km mark when the minor climbs up to bridges play havoc with my calves.

The flow of Delta life is best appreciated at a languid pace anyhow. Signs of the region’s prosperity are everywhere. Giant propaganda posters hanging next to fields depict rosy-cheeked workers carting wheelbarrows piled high with spring onions. Drivers veer all over the road as their weathered Hondas struggle to carry the weight of the durian and jackfruit they are carrying.

Searing heat and exhaustion aside, it’s a great ride. The most scenic stretch of the journey comes on the first day after a lunch of DIY rice-paper rolls with elephant earfish, claypot pork and fresh fruit at a historic garden house near Cai Be. We leave the paved tarmac behind to plot a course over rickety bridges, through leafy forest glades and alongside waterways. Here, local fishermen and merchants can be seen mending their nets and loading their boats with produce to sell at the many floating markets in the region.

I’m glad to make it to the sampan that will glide me down the Mekong to Vinh Long. With the cycling over for the day,
I can finally kick back. Tour companies in Vietnam are single-minded in getting their guests to allotted tourist restaurants that have paid commission. As a solo traveller and a resident of Vietnam, I can’t think of anything worse than chowing down on sanitised local cuisine with busloads of tourists on my own. To his credit, Chinh heeds my entreaties and invites me to dine with the guides at a backstreet restaurant away from the river. Barbecued field rat and deep fried eel-like fish with a tamarind dipping sauce make a real banquet.

For the guides, it is time to unwind with the help of the local rice wine. Thimble-like glasses are charged, recharged then charged again and the Can Tho night is punctured with loud cries of “mot, hai, ba, yo” (one, two, three, cheers!). My second Delta stupor of the day turns out to be much more enjoyable than the first.

Melbourne gets own ‘eye’

Give us a giggle: Felicity Ward