Those against Wilders stance on immigration labelled the politician racist, condemned the fact he was allowed a visa to speak in Australia and tried to stop ticket holders from getting into the venue.

As scuffles broke out, they chanted “racism, no way, we’re going to fight it all the way”.

The Australian reports about 60 police officers formed a ring around the venue to remove the protesters from the entrance.

There were no arrests.

Far-right politician Wilders had earlier held a media conference and said he wanted to warn Australians about the dangers of Islamic immigration.

His visit, postponed originally due to a delay in his visa being approved, was funded by the Q Society, which is concerned about what it calls “Islamisation” in the country.

Wilders arrived on stage to a standing ovation and condemned the Australian politicians, including Federal Minister Chris Bowen and Western Australia Premier Colin Barnett, who called him an “extremist”, a “fringe-figure from the far right” and in Barnett’s case, said he wouldn’t be welcome in his state.

“I am the leader of a party who have nearly one million voters in a country that is known for its tolerance. I am not a fringe figure and I am not a far-right figure either,” Wilders said.

He spoke on stage with large flags of Australia, the Netherlands, United States and United Kingdom as his backdrop. 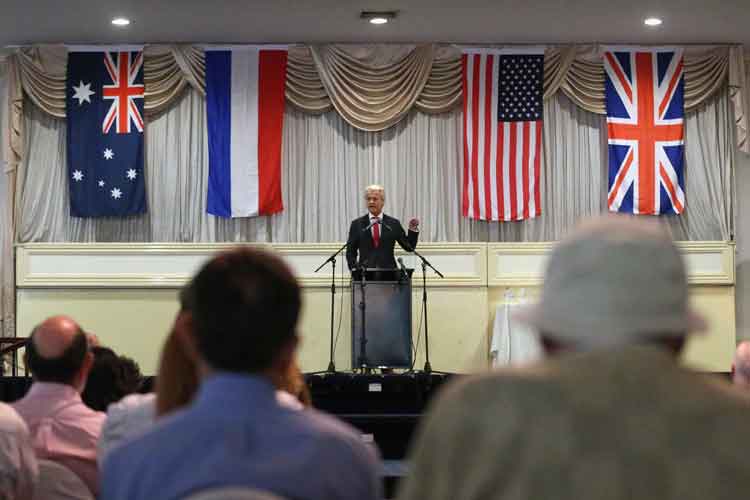