To mark the 452nd birthday of William Shakespeare – aka Britain’s greatest playwright  – and the 400th anniversary of his death later this month, we detail the programme of celebrations planned in the capital. Get ready to celebrate Shakespeare in style…

Shakespeare: Metamorphosis
Senate House Library, 14 April – 17 September 2016
Over the last four centuries Shakespearean text and scholarship, as well as perceptions of the man himself, have undergone continuous reinvention.  Inspired by the famous ‘seven ages of man’ speech from As You Like It, Shakespeare: Metamorphosis traces and explains this 400-year transformation by highlighting and displaying over 30 rare texts from seven significant ages of development, including the first folio from 1623.

Midnight Matinee: Much Ado About Nothing
The Rose Theatre, 22 April 2016
The Rose Playhouse was the first Elizabethan theatre on Bankside and the original home of many Shakespeare plays. There will be a special Midnight Matinee to mark exactly 400 years since Shakespeare took his last breath. Wolf-Sister Productions will produce a reduced version of one of his best loved comedies, Much Ado About Nothing, ending the play with a toast to Shakespeare for all to join in with a complimentary glass of Gin and Tonic. For more information, contact info@rosetheatre.org.uk

A service commemorating William Shakespeare
Southwark Cathedral, 23 April 2016
A Shakespeare monument and stained glass window, depicting characters from some of his plays, is the Cathedral’s most popular memorial. Shakespeare’s troupe of actors lodged here, and the choir at the Cathedral prospered during Shakespeare’s day when Southwark was the entertainment centre of London. A special service will be held from 11am-12pm, followed by performances from Arthur Smith and Rick Jones (an annual tradition at the Cathedral) from 2pm, revealing the truth about Shakespeare’s first publishers and performing lute songs from the plays. For more information, visit their website.

Shit-faced Shakespeare
The Leicester Square Theatre, 26 April – 11 June 2016
A staple of the Edinburgh fringe, Shit-faced Shakespeare has a cast performing a production of A Midsummer Night’s Dream, with one actor among them completely drunk. The cast get the actor blisteringly drunk before the performance and proceed to enact the Bard’s story of fairies and shape-shifters. The run marks the 400th anniversary of Shakespeare’s death. For more information, follow them on Twitter.

Shakespeare’s Bankside: A walk with John Constable
Walks start at Shakespeare’s Globe, 27 April 2016 and 8 May 2016
Join local historian, writer and playwright, John Constable to discover ‘Shakespeare’s Bankside’. On this free walk, visit the sites of famous playhouses – set among bear-pits and brothels. Constable’s popular Bankside walks reveal the human face of The Bard: where he (allegedly) attacked a man, where his brother was buried, where he and his fellow actors lived, worked and partied. For more information, visit the Better Bankside website. 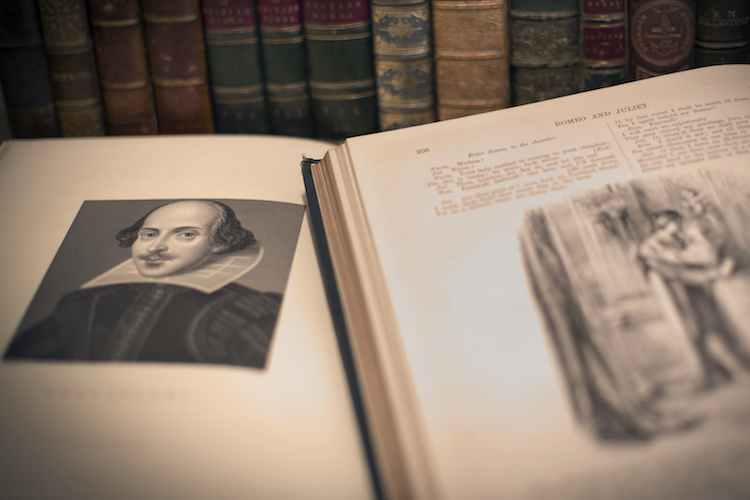 Romeo and Juliet
The Garrick Theatre, 12 May – 31 August 2016
Reuniting the stars of his celebrated film Cinderella, Kenneth Branagh directs Richard Madden as Romeo, Lily James as Juliet and Derek Jacobi as Mercutio in Shakespeare’s heartbreaking tale of forbidden love. One of Shakespeare’s most famous and often performed plays, Romeo and Juliet is the story of young love and the devastating tragedy that unfolds when tenderness and naivety is met with violence and pride. For more information, visit their website.

King John
Shakespeare’s Globe Theatre, 1 – 27 June 2015
The remotest in time of all Shakespeare’s English history plays, King John, with its cynical allegiances and ruthless politicking, now feels his most abrasively modern. This is a first for the Globe and a rare opportunity to see some vividly memorable characters brought to life on the stage – especially the wildly outspoken Faulconbridge, one of Shakespeare’s most thrillingly caustic political commentators.

Shakespeare’s Globe Exhibition and Tour
Shakespeare’s Globe, tours depart every 30 minutes from 9.30am to 5.30pm
Join the Globe’s expert guides who take visitors on fascinating tours of the iconic theatre, bringing the space to life with colourful stories of the 1599 Globe, of the reconstruction process in the 1990s, and of how the ‘wooden O’ works today as an imaginative and experimental theatrical space.

Losin’ Yourself in Melbourne

Hospitality in The Park is Fred V and Grafix

Stage: The Thrill of Love at St Jame’s Theatre