The six women reached the peak of western Europe’s tallest building and were arrested by police on suspicion on aggravated trespass.

Greenpeace chose the Shard building due to the building’s architectural resemblance to a shard of ice and its close proximity to three buildings that serve as headquarters to oil giant Shell. 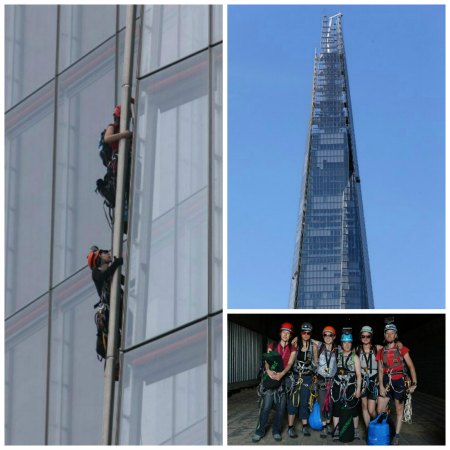 The Greenpeace Shard protesters before and during their ascent

Greenpeace UK’s website, which hosted a live webcam of tracking the progress of the climb stated: ” They don’t want us talking about their plan to drill in the Arctic. We’re here to shout about it from the rooftops.”

“It is an honour to stand here at the foot of Europe’s highest building and witness this remarkable achievement by these women,” said Greenpeace UK executive director John Sauvan.

“Watching them fly the flag to protect the Arctic from the top of the Shard is a remarkable sight.”

The Shard, citing “the interests of public and protester safety” closed its public viewing platform amid the media hype surrounding the stunt, which was done without permission from the Qatari owners of the building.

Defending Arctic drilling, Shell said in a statement yesterday: “Oil and gas production from the Arctic is not new. The Arctic region currently produces about 10% of the world’s oil and 25% of its gas. If responsibly developed, Arctic energy resources can help offset supply constraints and maintain energy security for consumers throughout the world.”

(1 more pic) as team #iceclimb left, 100 ppl cheered them on. A historic moment for activism and the Arctic. pic.twitter.com/XMv1NX08UN

TomKat The Divorce: It’s all over folks – Tom Cruise and Katie Holmes settle out of court