Everybody seems to fancy themselves as a star snapper nowadays. Afterall, digital cameras make it so easy to take a million pictures that anyone could get lucky and snap a classic every now and again.

Many people could even blag a certain level of skill from those pictures… if they ever actually did some editing of the 100 or so rubbish ones before uploading them to Facebook that is. The reality is, of course, that photography is an art form. Consistently taking great pictures (and not just when it’s a beautiful day in a beautiful place), and actually getting to a point where you can make some cash out of it, is no easy gig. We know one such bloke that’s done exactly that, however, so thought we’d ask him some questions…

When did your love of photography begin?
Photography had a gradual influence on me since my mid teens. I first touched on the subject at high school and then at college where I studied graphic design. One day about 15 years ago, something motivate me to buy a simple film SLR, the rest really came from that. It was all self taught in the beginning.

How did you become a photographer?
In a word, determination! Nothing in the creative field ever seems to come very easily, you have to be pretty single minded. I remember after being employed by Rough Guides finding out how many applications there had been for the job. There’s a lot of competition for these things. Once I landed certain things it sealed my mind that anything is possible as long as you make the effort, even working in photography. There’s been a lot of detractors along the way who look on creative work in a negative way, or question what you’re trying to do. Don’t listen to them!

Do you believe an eye for a great picture is a gift or can be learned?
Like most things in life, some people will have more of a natural aptitude for such things but I wouldn’t call that a gift. Anything can be realised with lots of effort. With the rules of composition loosely in your head, a basic knowledge of photographic science and how a camera works, then things will start to come to you. Like most art forms, experimentation and trying new things is key in the beginning.

How can an amateur turn pro?
Build up a strong body of work first before presenting yourself as a photographer. Diversify and don’t turn things down. The latter point may sound an obvious one, but remember it could include you having to work for free. You should always place a value on your work, but getting in to the right place at the right time is what a lot of photography is all about. Working for free or for access to certain places and events can open up a lot of doors. In terms of the types or styles of photography and making a living from those then the list is endless, pick two or three elements that you really enjoy and try to master them, rather than setting out to be the best at one particular aspect. 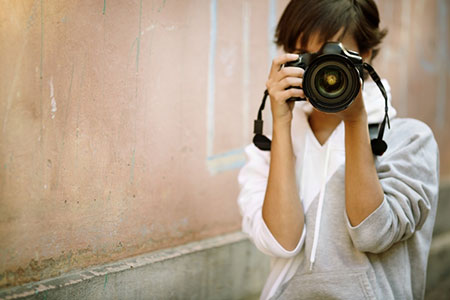 If you see a shot, take it. Even if you’re in the same area or city for a few days and you think you’ll pass by the same scene again, the chances are you won’t. Memory for cameras is relatively cheap nowadays, so shoot away!

2. Think about thieves
If you’re in a place that you’re unsure of or isn’t that safe, then head out without all your camera gear and get a feel for things first. Covering up any of the flashy bits of your camera with black electrical tape, like the many logos modern cameras come adorned with, is a good move wherever you are. Simple steps like this can make you far less of a target for thieves.

3. Plan your day
It’s good to have particular places or shots in mind before you travel somewhere. Make a simple list or firmer plans to visit and shoot these. Spend the rest of your time with less of an agenda and you should also be rewarded with some more spontaneous moments.

4. Get up early
In most parts of the world, early morning and dusk (the Golden Hour) are great times to shoot. The light at these times is really worth getting in position for. City-based locations will reward such early morning efforts even more as there will be less people and other tourists getting in your way.

Richard Herring – What is love anyway?