Perhaps unfairly, mime in 2012 isn’t seen as the head-turning, boundary-pushing art form it once was. For many, the stereotypes – white-faced men in stripy jumpers, trapped in boxes, sad clowns with over-zealous facial expressions, and Marcel Marceau – bring to mind a dated comedic genre that should be left where it came from.

But the word in its original form simply means acting out a story through human movement, without dialogue. And when that’s done well, mime is an exciting and valid non-verbal art form.

Shunning the stereotypes, this month’s London International Mime Festival promises no tiresome buffoon sketches. Instead,15 theatre companies will present their speechless stories of bereavement, love, manipulation and illness, which they express physically. Imagine a Cirque du Soleil without words, and much artier and grittier.

“The image is everything,“ says the festival’s co-founder and co-director, Joseph Seelig. “These art forms are often able to express ideas and emotions more eloquently than words can. People who come to the festival know they’re going to see something that’s off-the-wall, but they might not know exactly what.

Now in its 35th year, the two-and-a-half week event is London’s longest running annual international theatre festival. This year, acts come from Australia, Belgium, Japan, Spain, France and Switzerland, as well as the UK. And it’s the lack of dialogue that breaks down language barriers and makes the work internationally accessible.

“If a play’s spoken, it’s perhaps easier to understand than something that isn’t,“ Seelig says. “But people flock to dance or to other forms of non-verbal theatre. They’ve just got to use their imagination a bit more, and people who go to theatre want to do that. It’s like listening to music – it opens a million different interpretations. That’s why live theatre is exciting.” 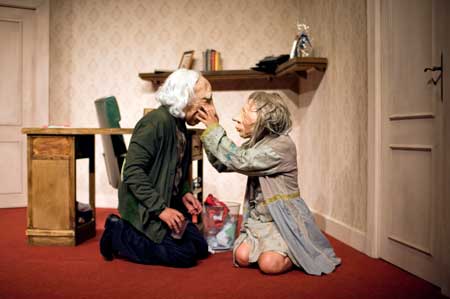 Non-verbal performance spans genres. Mime in this case is an umbrella term for shows with heavy visual emphasis. They can be set to a soundtrack or have the occasional word thrown in, as long as they lack a scripted dialogue. Mime in this sense, encompasses contemporary circus, puppetry, magic, clown theatre, performance art – all kinds of staged visual theatre that don’t count as plays.

UK-based company Gandini Juggling will perform Smashed, inspired by the late German choreographer Pina Bausch. It’s an elaborate, hour-long exploration of the darker, manipulative side of relationships between men and women, using one hundred apples and a lot of crockery.

Havana-born Sean Gandini is leading the battle to restore mime’s credibility. “We have to fight to show that the work is so different and diverse,“ he says.

“The organisers of the festival are good at recovering people that are slightly uncategorisable. We’re not dance, we’re not circus, we’re not theatre. There’s nowhere to put us. I suppose performance art is a good word, or theatre art. I don’t know. It’s hard to describe. Maybe it’s just juggling.“

Fleur Elise Noble’s 2 Dimensional Life Of Her stalks further into the realm of performance art, using drawings, animation, puppetry, projection and paper to “immerse the audience in the space between the maker and the made,
the artist and their artwork“.

The Australian artist, who grew up in the apple-growing town of Lenswood in the Adelaide Hills, would never dream of using the word mime to describe her performance, but understands why anyone interested in it would appreciate her non-verbal theatrical offerings. 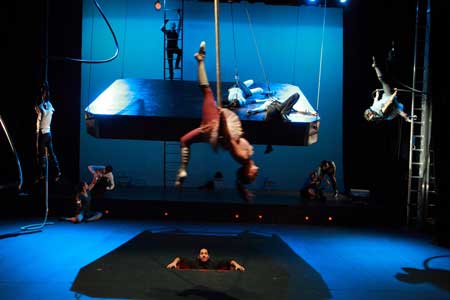 But what’s her performance really all about? “If you can imagine being surrounded by a giant pop-up picture book with every surface alive with projection and acting as a doorway into another reality, then it’s possible you’d have
a very fuzzy sense of what to expect,“ Noble says.

“But I’m afraid that’s about the best I can do. 2 Dimensional Life Of Her is a highly visual experience that is virtually impossible to explain with words.“ Although sceptics may view such an answer as a cop-out, the key to non-verbal performance like mime, is that you develop your own interpretation as you watch.

The visual, wordless art form can be taken at face value – with moments that are at times slapstick; props and stage design that are impressive; alongside skills that are honed – or the audience can hunt for the story, however opaque it might be. Either way, it’s dramatic, it’s entertaining and it is, unquestionably, a visual spectacle capable of crossing cultural boundaries.

When asked what she’d say to anyone rooted in their stripy-jumper-man-in-a-box prejudices, Noble’s stance is firm: “I’d ask them to re-enact all the things they didn’t like about it, and if that wasn’t entertaining enough, I’d suggest they do it in a tutu.“ ❚

Have you got what it takes to become a Bear Grylls Survival Academy Instructor?