Six of the best breakfasts in Asia

Anantara Angkor Resort: butlered breakfasts among the temples
It’s one thing to see Cambodia’s Angkor Archaeological Park among scores of tourists in the sweltering heat of day. It’s something else entirely to be up, close and personal with a temple virtually to yourself as the sun appears, indulging a delectable breakfast to fuel you for the remarkable day ahead. On the five-star Anantara Angkor Resort’s new, off-the-beaten-track ‘Sunrise Breakfast at Angkor’ tour, a veteran guide with an encyclopedic knowledge of and special access to the UNESCO World Heritage Site helps you beat the crowds, ushering you to secluded vantage points to watch the day break over the awe-inspiring temples. After sunrise, repair to one of the less frequented temples close to Angkor Wat where a personal butler is waiting to serve freshly squeezed juice, coffee or tea, and an array of tropical fruits and freshly baked pastries.

Grand Hyatt Taipei: Asia’s most ambitious buffet
With nearly three-dozen chefs at the helm in a plethora of show kitchens, with 168 culinary options that span the globe and with a variety of artfully conceived venues, the vibrant new Café is collection of plays within one grand, international play. The Café seats 290 on multiple tiers of dining, and the low-level buzz of people at work in the morning on their omelettes and coffee is a welcome jump-start on the day. You can indulge traditional Western fare here, from the Continent, from the Americas, and from Japan to boot. But the mindful traveler knows that this hotel is also home to two of Taipei’s premier Chinese eateries — Pearl Liang (Cantonese) and Yun Jin (pan-China) — and that, by osmosis, the dim sum is going to be inspired. And it is, from the shrimp dumplings and sui mai to the steamed rice cakes. And if pancakes have to be part of your breakfast fare in Taipei, try the pan-fried pork Chinese pancakes. Don’t miss the fresh juice bar where the bartender is on hand at breakfast, every breakfast, to produce juice on order — watermelon, mango, carrot, and so on, seemingly ad infinitum.

Palace Hotel Tokyo: Dining across the Moat from Royalty 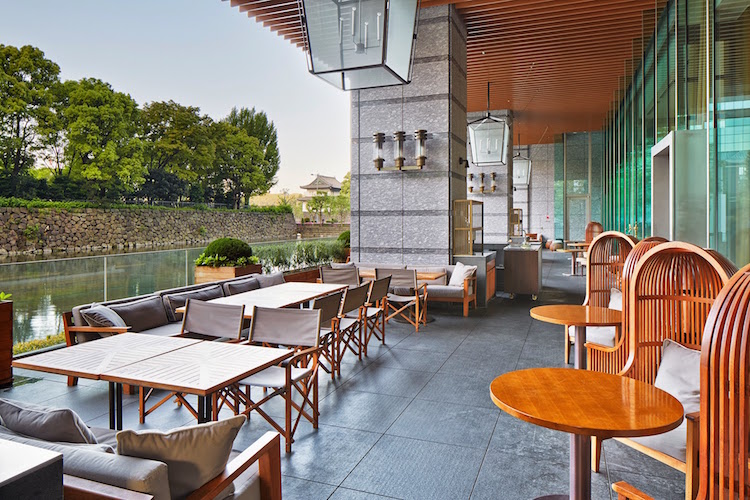 The moat outside Palace Hotel Tokyo wasn’t built to safeguard the guest base of this 2012 debut, but diners on the terrace of the Grand Kitchen are nevertheless beneficiaries of this watery oasis on the edge of the Imperial Palace gardens, a sprawling East Asian complex where Japan’s imperial family lives. It seems fitting, given the view, to choose a local meal from the menu options or variety of food stations peppered throughout the restaurant. The authentic Japanese breakfast features fresh and light grilled fish, flavorful yet not salty miso soup, and tamago-yaki (sweet omelette) cooked to perfection, along with special rice called yume-gokochi — which fittingly translates as “a dreamy state of mind.”

Reverie Saigon: Europe’s finest food in the heart of Saigon 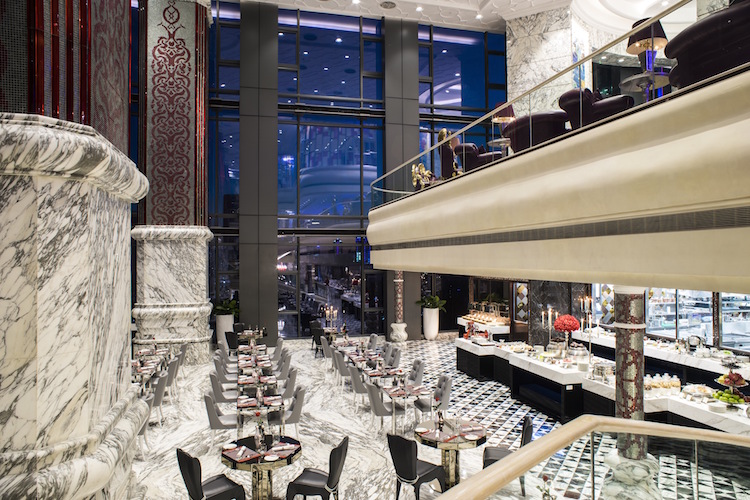 The European flair of Saigon’s newest luxury hotel isn’t limited to the décor. Here dining menus demand as much attention as the mosaics and marble that furnish the restaurants. It all begins at breakfast with Café Cardinal’s buffet spread. With a French chef at the helm the Parisian-quality baguettes are a must, and best enjoyed with a selection of imported cheese and prosciutto. But don’t forget to sample Vietnamese favorites like ice coffee over condensed milk or bo kho (slow-braised beef stew), then sit back and take in the view of a resort-style pool terrace that wouldn’t be out of place in Versailles.

Sofitel Bangkok Sukhumvit: A taste of France in the Thai Capital
While the venue of the moment at Sofitel’s flagship property in Southeast Asia is a sparkling new art gallery — the only art gallery inside a hotel in Bangkok — no guest should overlook the culinary masterpiece directly above, on the mezzanine level. That’s where you’ll find Voila!, which boasts a breakfast buffet to remember thanks in large part to a kitchen crew that’s committed to baking the best croissants this side of France. Throw in eight action stations — including a detox smoothie station designed to get the juices flowing — and the option to order gourmet, oven-baked, free-range eggs topped with tom yung hollandaise sauce, and you have the recipe for a divine way to start the day in the City of Angels.

The Sanchaya Bintan: Steak and eggs on the Equator
The Sanchaya Bintan lavishes the most important meal of the day with the attention it deserves, all to a backdrop of powder white sands, swaying palm trees, aquamarine waters and picturesque islands. Fancy sous vide egg innovative with soft-boiled egg, crab meat, yuzu hollandaise, parsley, toasted sourdough and black caviar? Or bo ne, comprising a sizzling wagyu steak, fried egg, grilled tomato, shallots and soya sauce? It’s a treat in itself determining what a la carte creation to indulge from a menu drawing on a mélange of Western, Japanese, Vietnamese and Malaysian influences, not to mention the chef’s ‘harvest table’ packed with granola, home-made yogurts, sourdough breads, preserves, honeys and fruit, as well as traditional Indonesian Jamu Gendong tonics served by a roving herbalist. Yet if you cannot find exactly what you want, talk to the estate’s ‘culinary artisans’ who will create a bespoke dish for you not featured on the menu.

ANC confident Zuma will be aquitted