Cursing myself for being last off the boat, I plunge into the water and try to get my bearings, momentarily blinded by the tangle of snorkels, fins and bubbles ahead of me. Within seconds, the bubbles clear and I freeze – I’m face to face with the biggest fish in the world.

A whale shark is just metres away and heading straight at me, its huge yawning mouth gaping open. Unsure what to do, I pick the most stupid option and stay frozen to the spot, stunned, staring awestruck into the metre-wide mouth.

It’s as though the giant shark is sucking me towards it, like a tractor beam from some sci-fi mothership. Coming to my senses, I kick out and dart away, as it edges within just a few metres of me. However, it seems I had no need to worry. Just as I hurry out of its path, the eight-metre shark itself has the same idea, banking effortlessly to the left and throwing me a dismissive look, showing off its beautiful spots like a supermodel shimmying down a catwalk. 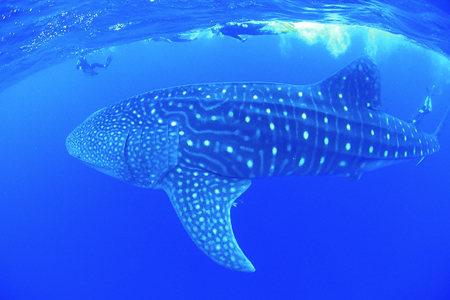 I’m swimming off the coast of Western Australia, on the Ningaloo Reef, otherwise known as one of the best places
in the world to see whale sharks in their natural habitat.

I’d never heard of Ningaloo before coming Down Under. I’d never heard of whale sharks either for that matter. But ever since a drunken encounter last year with an irrepressibly excited traveller, still boggle-eyed from the experience of snorkelling with the underwater gentle giants, it’s been top of my to-do list. Which is why I made sure I was on the Ningaloo Reef the next time whale shark season came around.

Most people concentrate on exploring its big eastern brother the Great Barrier Reef, but anybody who ignores the Ningaloo is making a big mistake. Indeed, it’s an unmissable stop on any west coast trip.

Stretching for about 280km about halfway up WA’s coast, the reef is at times just a stone’s throw from the beach. Plus, unlike the sometimes chilly Pacific waters off the Aussie east coast, the western reef is kept snug by some of the warmest waters on Earth – the Indian Ocean.

But the fact that wimps don’t get cold in the water isn’t what makes Ningaloo so amazing – it’s what you’re sharing the water with. From now until July every year, after the mass spawning of coral, large numbers of whale sharks, which can grow up to 12 metres and weigh up to 14 tonnes, move into the area to feed. 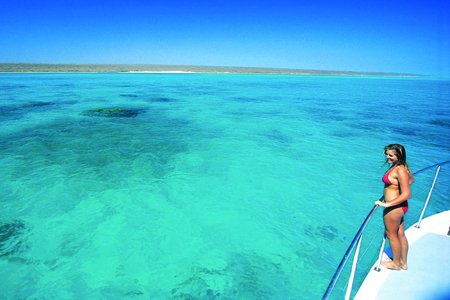 While it is possible to see these majestic masters of the marine world in other places, like Central America, hardly anywhere else is as accessible, reliable or eco-friendly.

Besides, whale sharks are just one of the area’s draw cards. Massive manta rays, weighing up to two tonnes, can also be spotted year round, although most commonly between May and October, while various species of whales and turtles, plus about 500 other types of fish, can also be seen at different times of the year.

I stop briefly in Coral Bay, a strong contender for Australia’s best beach. A peaceful lagoon nestling against the reef, Coral Bay has got such a dreamlike quality that it’s hard not to entertain fantasies of giving everything up for a life in a shack on the sand, doing nothing but snorkelling and sunbathing every day. But I’m on a different mission on this trip and so postpone my new life, at least until after my time in Exmouth, the main gateway to the Ningaloo Reef – kind of like the Cairns of the west, only smaller and quieter.

Finally stepping foot on the boat, I’m terrified. What if, after travelling thousands of kilometres and waiting all this time, I don’t actually see anything?

I needn’t have worried. The whales are so big and often swim so near to the surface that the boats actually use spotter planes flying overhead to track down the giants. And, while there is never any guarantee that you’ll see one, we don’t have to wait long before a sighting crackles over the radio from our eyes in the sky.

After an excited dash across the water, we’re in, and my first whale shark emerges from the bubbles.

Over the next few hours we see another six sharks, as well as a bonus pair of playful minke whales. Sometimes we get a glimpse of the whale shark’s shimmering patterns while still on the boat, other times it’s not until we’re under the water that we spot them gliding out of the darkness.

Some are bigger than others, but they’re all huge, completely dwarfing me despite being harmless. Some twist and turn, clearly enjoying playing with us, while others give us one bemused look and put on a surprising turn of speed to disappear into the deep.

Each shark, each personality, each experience is different. But every time is incredible. 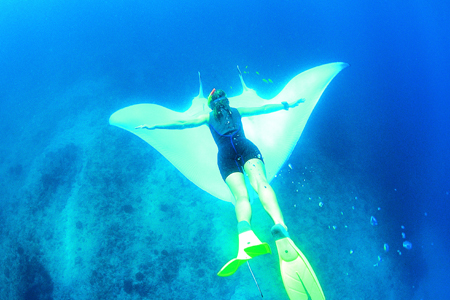 The fish are like a drug. Each time one scarpers, the cravings come back and I need one more hit and so desperately swim after the mysterious sparkling speckles. When the inevitable happens and the day eventually comes to an end, I’m still buzzing on my whale shark high. So with no idea where my next hit will come from, I have just one choice left – I head back to Coral Bay.

Where is it: The Ningaloo Reef is about halfway up the coast of WA, 1,200km north of Perth. The main town is Exmouth, or you can also stay in Coral Bay.

When to go: If you’re after whale sharks, then start heading there now. They were first spotted about a week ago and will be in the area until July. However, there’s plenty to see all year.