Fool me once, shame on you, but fool me twice, shame on me. That adage applies to Somerset and me. You  see, the first time I visited Devon and Cornwall I shot straight through the pleasingly named West Country county that borders Wiltshire, Dorset, Devon  and Gloucestershire. And, shamefully, the second time, too. But not the third. Oh no.

Through the car window on previous trips I’d seen gentle rolling hills, villages full  of thatched cottages and cricket greens, orchards stuffed with rosy apples, and country roads with hedgerows so high  it felt like I was in a maze. It all looked  so rosily rural and innocently summery  – even the word ‘Somerset’ loosely translates as ‘people of the summer’. And there were lots of signs advertising cider.

I recently discovered that I had been a fool. Somerset is well worth stopping off at – there’s heaps to see and do. Must-see, honey-coloured Bath is no secret, of course, and Somerset’s next biggest attraction is probably Glastonbury. I don’t necessarily mean the world’s greatest music festival: the area long been a spiritual centre, thanks to the ley lines  that cross through it. Legends link both Jesus and King Arthur to Glastonbury and this status has inevitably attracted a New Age crowd (from which the festival sprung).
Here you can buy veggie treats, purple crystals and overwhelmingly smelly candles from people called ‘Moonshine’. Meanwhile, Glastonbury Abbey is Britain’s oldest Christian foundation and it’s also well worth climbing Glastonbury Tor to see the remains  of 15th century St Michael’s Church and rewarding views across Somerset, Dorset and Wiltshire.

For a bigger ecclesiastical edifice, visit Wells, England’s second smallest city (after the city of London). Its  epic 12th-century (though some parts date back to the 10th) cathedral is in outstanding condition, with almost 300 medieval statues, said to be the finest collection in Europe. The town’s market square, Crown pub, St Cuthbert’s church and even the supermarket will look familiar to some – Wells also provided the setting for ‘Sandford’ in Simon Pegg’s film, Hot Fuzz.

At nearby Longleat, many animals will look familiar but it’s still thrilling to see tigers, wolves and warthogs up close from a car window. Leave a long day free for this place, as when you’re done with the critters, there’s a maze  and mansion to explore and plenty  more activities that made me wish  I was 10 again.

Cheddar Gorge may sound like a place where you get fat on cheese, but it’s actually England’s version of the Grand Canyon, and the enchanting, twisting cleft in the Mendip Hills demands exploration. It was voted Britain’s second greatest natural wonder in a Radio Times poll and  the country’s oldest skeleton was  also found here, as was a popular type  of cheese, of course.
There are more caves at nearby Wookey Hole. They’re allegedly haunted and known for the Witch of Wookey Hole; a roughly human-shaped rock, reputedly turned to stone by a Glastonbury monk.
Both the Hole and the Gorge are part of the Mendips, which, while relatively small, rise from their flat surrounds with charismatic abruptness. A hearty clamber up bequeaths outstanding views of the West Country’s green and pleasant lands. The Somerset Lowlands, to the south, are where a fugitive King Alfred is meant to have burnt the cakes in the 12th century.
Further south, hikers will delight in the Quantocks (Bridgewater is the best base) and Exmoor and there’s a coastline to play with too. 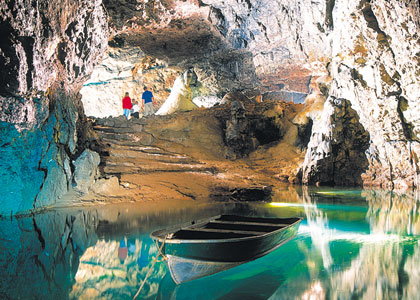 “I am a cider drinker, I drinks it all the day” sing Somerset band The Wurzels on I Am A Cider Drinker, a song which celebrates the liquid the region is best known for.
The UK produces well over 600 million litres of cider each year and there are two main schools; the west, and the Kent and East Anglia, traditions. The west-side use a much higher percentage of true cider-apples, meaning their juice is richer in tannins and sharper in flavour.
There are more than 25 cider makers in Somerset alone, many of them small family outfits, while Shepton Mallet houses the largest plant in Europe, Gaymer Cider Company (which makes Blackthorn and Olde English), while Thatchers Cider and Brothers Cider are also local.
Cloudy, unfiltered ciders are often called scrumpy, from the word ‘scrump’ which is local-speak for a small or withered apple. Warning: be careful. It can get you rat-arsed with lethal speed

When to go: There’s a clue in the name – summer’s when the apples  are ripe and the cider fresh. But  autumn and spring are almost  as good. Winter means you’ll dodge  the crowds at the bigger attractions.
Getting there: You’d be best off with  a (hire) car, but otherwise trains go  from London Paddington to Bath and Bridgewater (and Bristol) and local buses could carry you further.
See: visitsomerset.co.uk