The SOS 4.8 festival in Murcia, Spain is as yet unpolluted by foreign masses. A relative newcomer to the festie circuit, that doesn’t stop SOS 4.8 pulling in some big names. This year Suede, MGMT, White Lies, Editors and Two Door Cinema Club perform, among others. TNT’s Rebecca Kent gives us the lowdown…

As the afternoon bleeds into the evening in Murcia, the sun still toasting surfaces in this university town, generations of friendly folk swarm through the marble plazas and feed pigeons by the gardens, Jardín El Salitre, adorned with bullfighting memorabilia. The staff in Reataurante Lizarran, in Calle Polo de Medina (a great haunt for excellent pinxos, jovial staff and desperately cheap cider and sangria) start to move to a new beat. 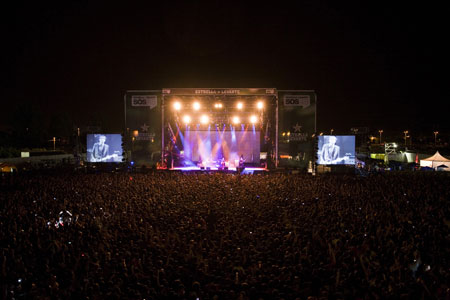 A short walk out of the city centre, one of the first music festivals of the summer, SOS 4.8, begins to unfold. It showcases top-billing bands, thumping dance music, kinky cabaret and sangria by
the bucketload, for two days, non-stop.

MGMT, Suede, The Editors, White Lies, These New Puritans and Two Door Cinema Club are poised to rock some Spanish socks off this year. A relative newcomer on the festival circuit, SOS 4.8 is unpolluted by foreign masses.

BOOK A TOUR OF SPAIN

As a result, you get a heady dose of joyous, sunny, Mediterranean fun. It is evident on the faces of the 30,000 carousers, intoxicated by sun and San Miguel, many of whom pile into dodgem cars and ram into fellow revellers – no health and safety jobsworths spoil the good times here.

In typical Spanish fashion, the SOS 4.8 doesn’t get kicking until the sun has well and truly gone. Until then, the early birds can knock off a couple of hours with some expertly curated contemporary art. This year, it celebrates music, sex, drugs, nightlife, money, beauty and youth – the artists have got it in one. Pull yourself away from the live music for the cabaret tent. The performers have personalities larger than the the space they entertain in and the result is a diabolical hour of depravity that’ll have you in a headspin.

SOS 4.8 has a serious side. At times, while music throbs outside, a concert hall, which has previously hosted PJ Harvey and Tindersticks, also houses stimulating conferences (this year, dance culture
will be discussed), and a series of stalls promote matters of the environment, underscored by the festival’s credential’s as ‘Green and Clean’.

Murcia’s 250km of coast is aptly called La Costa Cálida (Hot One). With more than 3000 hours of sunshine each year, it almost guarantees an all-over tan, and it says a lot for the disposition of the  locals.

The festival’s co-director, Hector Fina attests: “Spain, and specifically Murcia, are attractive for the gastronomy and climate, but if there is something special about Murcia is the friendliness of the people.”

WHEN TO GO: SOS48. is on May 6-7.
GETTING THERE: Murcia city is a 40-minute drive from Murcia airport and the beach is only 15 minutes away.
GETTING AROUND: It’s a 10-minute walk from the city camping site and shuttle buses run from the beach camping site. A tram also travels from the edge of the city into the centre.
CURRENCY: Euro. 1 GBP = 1.18 Euros
LANGUAGE: Spanish.
GOING OUT: One litre of festival beer costs £7
ACCOMMODATION: A two-day pass costs €45
GET MORE INFO: sos48.com

OUIBUS, it’s what le fuss is all about!

Class of the week – Kettle Bells