A good bet for an alpine holiday for beginners and advanced alike, here’s why Massif de Aravis in France is the place to go this winter.

Between them the area is tailor made for beginners and intermediates. There are plenty of novice-friendly slopes and lifts in La Clusaz/Manigod and Le Grand Bornand.

For intermediates, there are some great blue and red runs – and while experts might be itching for something more hardcore, for anyone bar the most top-notch skiers or boarders, the slopes are challenging without being scary.

If you’re into cross-country skiing, Aravis is the place to go. There are numerous trails on the floor of the valley and higher up, providing an easy introduction and some challenging terrain for those who’ve done it before.

Perhaps best of all about Aravis is the delightful scenery. Whatever your ability, La Clusaz/Manigod has one up on many other resorts in that most of the runs are below the tree line – making your trips down the slope far more picturesque.

Speed riding is a relatively new sport, combining skiing and parachuting into an insanely exhilarating experience.

Put simply, once you’ve got a bit of speed up on your skis you let rip a parachute that’s strapped to your back.

You’ll need months to be as good as the locals who launch themselves off cliffs, but for the rest of us it’s a thrill to do a few tricks with nothing more than a tug of the parachute (See flyeo.com). 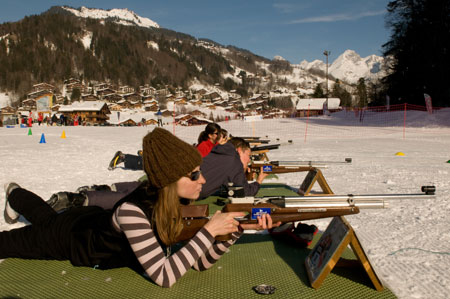 In Le Grand Bornand you can try biathlon – you ski cross country then drop on the ground and shoot at a set of targets.

It’s surprisingly good fun and something novice skiers and shooters can try. In 2011 the town will host a round of the biathlon European cup, which gives you an idea how seriously locals take it.

For something completely different, ski joering is hard to top. Wearing a short and easily manoeuvrable pair of skis, you and a partner hold on to the reins at the back of a horse, and get pulled along through pristine alpine tracks. It’s an exquisite and peaceful way to explore the region, save for the huffing, puffing and whinnying of the horses – though apparently they love messing around the snow.