Sport opinion: David Gower is out of line and out of touch with Aussie sledging

Posh English cricket legend David Gower called Aussies “feral” and with “animal instincts” in early Ashes salvos last week. But just showed himself as out of touch.Gower played 117 Tests for England and won an Ashes as skipper, so his voice is worth respecting. But he stepped away from his area of expertise in his Radio Times interview.

Asked whether England’s rivalry with Australia is a clash of cultures, he said: “I’m tempted to say, how can you have a clash of cultures when you’re playing against a country with no culture? That would almost be sledging.” Now, ‘Lord’ Gower (nickname, not official title), by saying that, it is sledging. And you’re out of order. When did you last step out of the commentary box and into the crowd. The Lord’s Pavilion doesn’t count.

Australian cricket stands are stacked with culture. Multi-culture! What about the Mexican in the form of waves and sombreros, tribal face paintings (green and gold of course) that’s traditional in countless cultures and so on…

“The trouble is, if they’ve had 10 cans of lager, their ability to come up with something akin to Oscar Wilde diminishes.” On the contrary, Irishman Wilde didn’t mind a tipple, so elements of wit at that stage would be a bit like him. And beer is served in bloody plastic cups now anyway.

The Barmy Army, as I’ve said here before, have had years of being pummeled to get great at singing, and on this I concede their genius. Aussie gibes are “stereotypical”, but we’re learning. A few years of floggings and we’ll be entertaining too.“

If they sense weakness, they’ll come at you.” For this one, I turn to Ricky Ponting, who told TNT last week: “If you’re not doing that, you don’t want to win. Simple as that.” 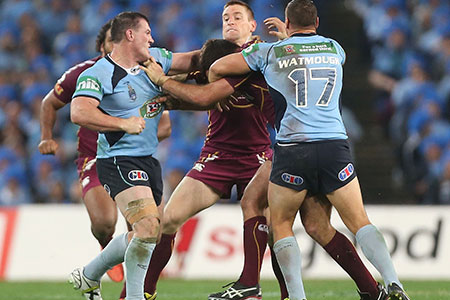 Bring back the bin for the biff

The primal satisfaction that comes with a guy from one team who seemingly deserves it getting jobbed on the chops is a real and understandable thing, but it doesn’t make it right, or tough.

NSW captain Paul Gallen’s punching practice on Queensland Nate Myles’s gob sadly became the main talking point in a first State of Origin match that was epic, exciting and breathed life into the series with a Blues win given the star-studded Maroons have won the past seven series.

But while the shots connected with the proficiency of a pro boxer, and he’ll miss a game for Cronulla, he should have gone to the sin bin.

If Myles’ indiscretions inspiring the flurry were worthy of it, he should have gone too. It’s a bizarrely accepted reality that rules are more lenient in Origin, especially when it comes to a bit of biff. The crowd loves it apparently. But it’s still the same game, with the same rules. The last thing league needs is more confusion.