The sight of Germany’s two top football teams playing out the biggest final in world club football at Wembley will catch in the craw of many an Englishman this Saturday.

But the cloying meditations we’ve seen clogging up the sports columns over the past few weeks, talking of a permanent shift in the landscape of European football away from Spain and England, are nothing more than lazy filler at the end of a season with little left to play for.

The only magical thing happening in German football is the wage and club structures, which mean a season ticket to Dortmund costs the same as a posh meal, not a family hatchback like in England.

The German league, like the Spanish and to an extent the Italian league, remains hugely stilted. And while the Premier League was dominated for a while by The Big Four, Tottenham, Everton and Manchester City have shown that grip was far from impregnable.

The fact that a team as good as Wigan, a team of enough quality to win the FA Cup, ended up getting relegated this season is a testament to the fierce competitiveness of the Premier League, and that’s the reason it remains the most popular league in the world.

Since 2000 there’s been all-English, all-Spanish and all-Italian Champions League finals – none were symptomatic of a great revolution in their footballing structures. This final is no different. I understand the English columnists’ temptation to believe it. There’s much to admire about the Germans.

Ticket prices are fair and wages are sensible – it’d be great if these things produced a first class league, but they don’t, they create two good teams. 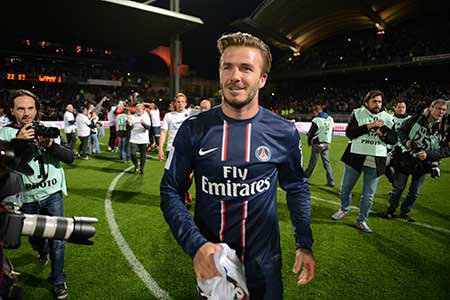 David Beckham’s retirement from football was greeted with tweets of ‘meh’ from the majority of his fans who’ve always regarded the former United and Madrid man’s real career as being preposterously good looking, seeing the whole football thing as more or less incidental.

While it is sometimes easy to forget that Becks has always been first and foremost a footballer, his career is one that few in the modern game could dream of.

Beckham was never gifted many of the attributes necessary to make a top flight footballer. He was never quick and Alex Ferguson genuinely worried that he might never develop requisite strength for professional football.

What he had, which he developed almost entirely through devoted practice, was a wand of a right boot, and with free-kicks and crosses it brought him almost everything the game had to offer.