It’s early morning when the Graffiti Life artists get to work on the larger-than-life TNT Magazine painting. Something this detailed and of this proportion can take the lads hours to perfect, so, armed with various cans of coloured spray paint, Adam Brazier and David Speed are prepared for the long haul. They’ve located a just-waiting-to-be-graffitied white wall – the perfect blank canvas for their work of art. However, it appears that it might take longer than they expected – no sooner have they sprayed the first few marks, they’re interrupted by the screeches of a less-than-impressed woman who lives nearby. She’s unhappy that they’re “vandalising“ a wall within view of her house. She doesn’t want to have to look at “rubbish graffiti“, she wails. So the lads are forced to prove they’ll paint over the finished design by going to buy cans of emulsion.

Graffiti is illegal – despite the impression given by high-profile street art in the capital, and the numerous tours which are springing up, fuelled by the public’s desire to jump on the bandwagon the likes of Banksy have started. The illustrious artist has done wonders for putting what was once considered an eyesore on the agenda. But, for those not quite as famous, there’s still a way to go.

“Banksy works now get protected and covered with plexiglass, but if you’re a lesser-known name, you’ll be arrested,“ Speed, 29, explains. “This hypocrisy isn’t Banksy’s fault, but surely the law is the law, and he should be as accountable as a kid tagging a bus stop.“ 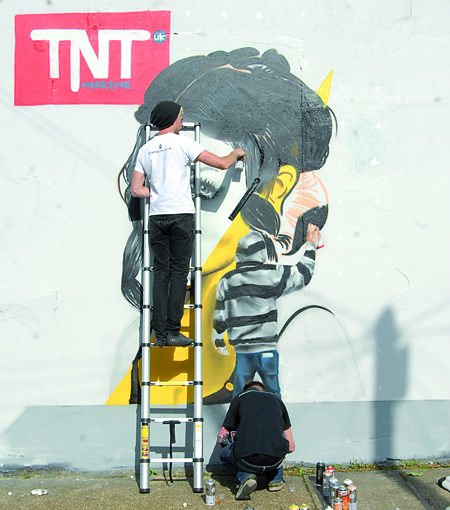 Speed, known as ’B’, and Brazier are two of about 20 artists in the UK who form street art outfit Graffiti Life. Brought together by a love of what they did – sometimes illegally – they started off in 2008, offering murals, painting home interiors and exteriors. Now, the company is riding a wave of interest. From hosting events, such as the one in Boxpark in Shoreditch on July 29 – giving away 100 pieces of unique urban art – to running workshops and being sought-after by global brands, they’ve come a long way since the days of spraying while trying not to get caught.

“We all took very different paths to get to where we are now,“ Brazier, 23, admits. “Some of our artists painted illegally for many years and had frequent brushes with the law. Some of the crew went to art school and gained degrees and master’s in fine art. Some did both. Some are tattooists, some are graphic designers but the one common bond between us is graffiti art.“ B adds that despite the edgy, glamorous image associated with street art and the talent behind it today, as individual artists when Graffiti Life was first getting off the ground, they faced a crossroads.

“It got to the stage where we were seeing friends go to prison for graf – it was either carry on down that path or do something positive with the art,“ he says. “Graffiti is such a powerful medium, and it may sound dramatic, but I’ve seen it change people’s lives. It’s certainly changed mine.

“All of a sudden we were given the opportunity to make our living doing the same thing we’d been arrested for previously and promote graffiti as a positive artform along the way.“ 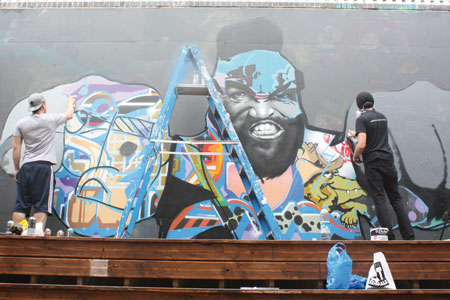 The artists hit the ground running at the right time, coming to the fore just as public perception started to change. However, although Graffiti Life, which is based in trendy east London, is thriving, money can still be seen as a dirty word on the street art scene.

Purists argue those who make cash from spraying are selling out. But B says he has “paid his dues“ by working illegally when he was younger, and has moved on – and is now approached by huge companies, wanting Graffiti Life to boost their brands with a touch of street art cool.

“As far as I’m concerned, I’d rather do what I love everyday than ’keeping it real’, working a job I hate and only painting at the weekend.“

And B believes his team have earned it. “People have been making money from graffiti since it was first popularised in the late Seventies. But people who get into street art just to get paid don’t make good work,“ he says. “They will copy what’s made money before and their work won’t be credible or original.“

Brazier agrees: “You can spot it a mile away, pseudo-political messages, Banksy rip offs, all following the same formula. If you’ve never actually made work in the streets and you use that title to sell paintings, then you’re a fraud!“ 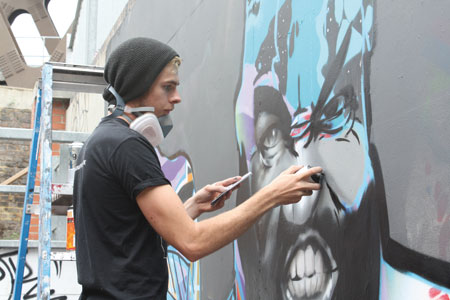 Although B admits to missing the adrenaline rush of painting illegally, he says he now gets his kicks from pushing the artform.
Brazier adds: “One day we could be painting a cartoon character in a kid’s bedroom, the next, we’re painting a huge billboard for a big brand.

Highlights include working for companies such as Nike and Disney. We’ve also painted live at Glastonbury and made a few TV appearances.

“Our favourite projects are where we’re encouraged to just be creative and aren’t tied down to a specific a brief.“
And it’s not just homegrown talent which is thriving in London – the shift is being felt worldwide, with the capital the go-to for international artists. 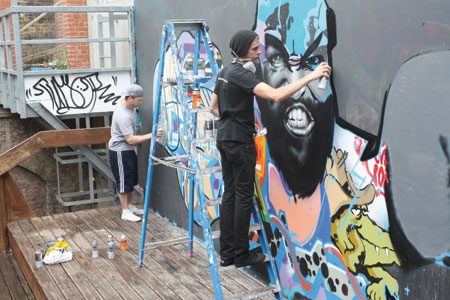 The 42-year-old, who was behind the Barack Obama ’Hope’ poster, called the capital a “great“ city for street art, because it’s so densely populated. While Numskull, from Sydney, is one of 39 international artists displaying his art as part of Bethnal Green-based High Roller Society’s Good Times Roll exhibition.

But, as our TNT cover shoot displays, despite the popularity of street art, there are some stragglers from a bygone era who see it as an eyesore, as vandalism which shouldn’t be celebrated. And, as well as that opposition, it’s also hard work. 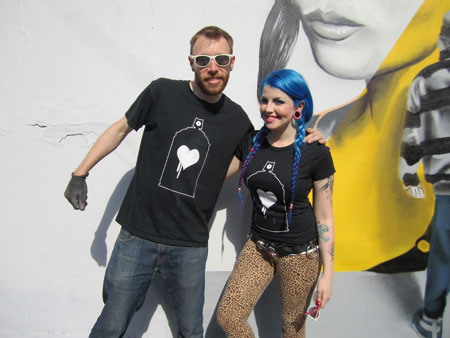 The lads have been given a brief for the TNT cover, to come up with a concept that shows how street art is emerging into the mainstream, how it’s now more accepted.

They’ve chosen to paint their friend, Amie Conradine – a blue-haired model who has graced the cover of Bizarre magazine.

“Rather than just a straight portrait, we thought it would be interesting to paint an artist in the foreground, as if the portrait was being finished by this character,“ B says.

In total, the lads work on the design for about 10 hours – so it’s almost heartbreaking when they have to paint over the final piece.

Afterwards, to the naked eye, you’d never know it had been there. Brazier says it isn’t as bad as when an artist’s work is sprayed over by another ’writer’.

“Traditionally, covering another artist’s work is seen as a declaration of war,“ he explains. 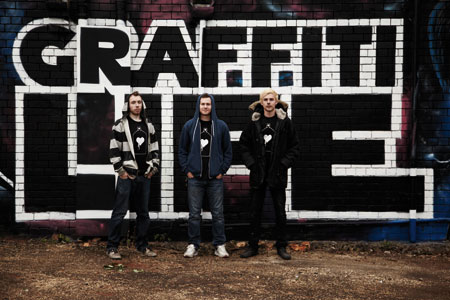 It’s something Banksy must now be used to. Last year, one of his murals, said to be worth £100,000, was painted over by bungling council workers in Bristol, causing outrage.

However, that’s not something that would worry B, who admits the artist’s work isn’t to his personal taste.

But he does acknowledge how the perception of street painting has changed thanks to the satirical artist – who has never revealed his real identity – but that doesn’t necessarily make him popular on the scene.

“Without Banksy we wouldn’t be doing this for a living,“ B says. “He is probably the most well-known artist in the world and made people pay attention to street art.

“Within graffiti he’s pretty universally hated, but a lot of that is probably jealousy. Most graffiti artists want fame, who is more famous than Banksy?“

The book behind ‘Invictus’ – meet the author

Staying in the Netherlands for Work: What Permits You Can Apply For