Wigan’s Ben Flower was sent off after a second punch on New Zealander Lan Hohaia, who was laid out on the ground already after Flower first clocked the playmaker in retaliation for elbow on him.

Wigan fought gallantly, and without their fists, after that but the one-man difference proved too great for them to defend the title.

As Flower was ordered off, the Saints were also hindered with Hoahaia’s involvement in the match also over. 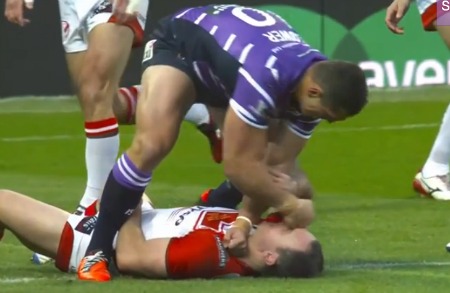 But as the match went on the Warriors ran out of steam, with Sia Soliola and Tommy Makinson tries settling the score.

The Saints coach Brown leaves England after his second full season with the biggest trophy he could hold.

Flower has the added distinction of being the first player sent off in a Super League grand final and his punishment could go beyond regular judiciary proceedings, with possible criminal charges being considered.

The action has been widely condemned from all corners.

Images via Getty and Youtbe

Rugby Union: All Blacks come to England in 2018