I’ve staggered out of Irish bars from Ecuador to South Africa, but, until recently, had never actually set foot  on the Emerald Isle.

Because of this, my initial reaction on being confronted with a row of brightly painted bars sporting Celtic lettering and shamrocks is to think I’d stumbled into some sort of tourist-trap nightmare. But as I dive in and order my first pint, it sinks in that these pubs aren’t fakes: the real thing does in fact look like, well, an Irish bar!

“If you divide the pace of life in Dublin by three you’ll get how chilled out the people in Galway are,” says Michael, an ex-Guinness rep I’ve just met at the bar.

It’s true. The city centre has been pedestrianised and this, along with the generally laid-back vibe, makes pottering around the sights feel almost festival-esque. 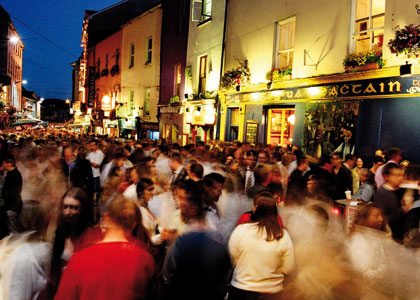 I’ve got the ‘onerous’ task of previewing the pubs ahead of St Patrick’s Day – during which the whole strip apparently turns into a giant party – and I’m getting down to the task at hand.

I’ve managed to cram in some sightseeing before lunch: Lynch’s Castle, once home to Galway’s most powerful family; the Spanish Arch, originally  part of a 16th-century wall to protect  the city’s merchant ships; the Claddagh area, birthplace of the eponymous ring.

And now here I am, propping up a gen-u-ine Irish bar, nodding in agreement as Michael tells me: “In Ireland, we say you should never go for only one drink. A  bird never flew with one wing.”

I start my research in Tig Cóilí, dimly  lit and cluttered in a cosy kind of way. Later that evening the place is heaving and there’s a traditional band playing. 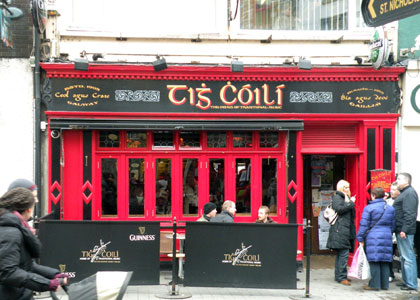 Then there’s Freeney’s. Don’t be put off by the Swiss army knives and live bait in the window; have you never seen a bar that houses a fishing tackle shop? This local’s pub ain’t glamorous but I hear  my best banter from the mainly over-50s regulars which frequent it.

Allegedly, owner Tony Freeney once had a Jack Russell that would stand on the outside toilet roof and bark when anyone went in. On returning to the bar, locals would solemnly inform you that the dog “only barks at virgins”. Bless.

Next, I step into The Quays to be greeted spectacular mishmash of Gothic arches. The pub’s stained glass windows, imported from a French Medieval church, make me wonder whether Tony Freeney’s dog would have barked at the Virgin Mary, had she ever used the bog in his pub. 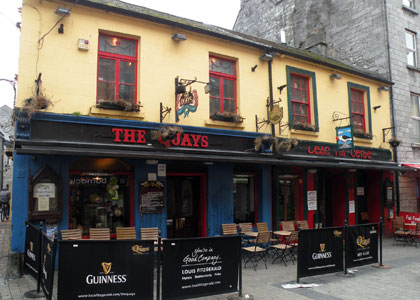 Into the evening, Galway’s bars steadily fill up and the wonky walls of Neachtain’s provide support to survey the cross-section of happily boozing humanity. As students, trendy couples, scruffy old guys and the odd out-of-towners keep up a friendly roar of chatter, I marvel at the novelty of being in an Irish bar in Ireland.

Flying a hawk is one of the most incredible things you’ll ever do and there can’t be a more fitting setting than Ashford Castle in Cong, County Clare.

Walk in the ancient woods surrounding the castle with a glittering-eyed bird of prey on your arm. The hawk will fly from tree to tree, swooping back to land on your glove when called.

As you walk, you’ll learn about the 4000-year-old art of falconry from an experienced, passionate guide and marvel that humans can interact with these majestic birds.

Ireland’s School of Falconry is the oldest falconry school in the country and you’ll get a chance to see Harris Hawks, Peregrine Falcons and an Eagle Owl. Incredible. (falconry.ie) 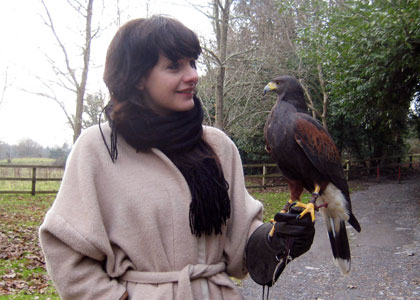 Oscar Wilde described the stark, dramatic peaks of Connemara as having “savage beauty”. Only a  short drive from Galway City, the mountaintops and vast bogs feel wild and open and the coastline is stunning.

Drive across the peaks and stop for lunch in Clifden or Spiddal, where you’re more than likely to overhear someone speaking Irish.

If you’ve got the energy, Connemara is crying out to be biked, hiked and scaled. Go horse riding or mountain biking in the national park, surf, sail, kayak or windsurf in the Atlantic or  try rock-climbing in the Maamturk Mountains (discoverireland.com).

Connemara is also the gateway to visit the remote Aran Islands and if you need some serious peace and quiet to silence your demons, then this is your spot (irelandislands.com).

When to go: Anytime.
Getting there: Aer Arann and Etihad fly directly  to Galway from £70. GETTING around Hire a car (from £17 per day) to get out of the city. See sixt.co.uk
Currency: Euro. 1 GBP = 1.18 EUR.
Language: English, although Irish is spoken in some places.
Going out: A beer costs £3.40
Accommodation:  A dorm bed costs  from £8.50. Hotel  rooms from £30.
See: discoverireland.com.

» Frankie Mullin flew directly from London to Galway with Aer Arann (aerarann.com), stayed at the Harbour Hotel (harbour.ie) and explored in a car from Sixt Car  Hire (sixt.co.uk).