After violence marred student protests around the country yesterday, both students and police have come under fire for their role in the drama.

Although many of the demonstrations were peaceful, violence erupted in London when student protestors vandalised buses and bus shelters, broke windows, sprayed graffiti on government buildings, threw home-made petrol bombs and demolished a police van in London’s Whitehall.

In London, there were 32 arrests for offences including violent disorder, theft and criminal damage, burglary and public order offences.

Two policemen were taken to hospital and 17 members of the public treated for minor injuries. 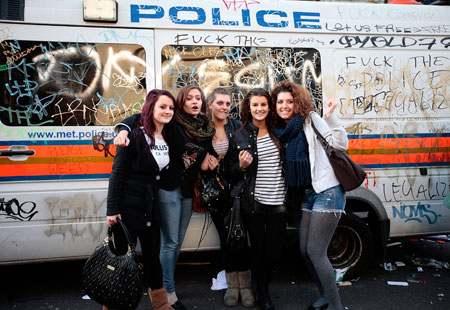 School children as young as 13 and had come to protest in their school uniforms were caught up in the violence. Many reportedly became hysterical as demonstrators threw flaming missiles and shouted: “F*** the cops.”

Student groups have today claimed that much of the violence was carried out by an anarchist group called Black Book.

However, police have been criticised for ‘kettling’ student protestors, a tactic which was widely condemned after around 5,000 people were penned in outside the Bank of England during the G20 protests last year.

At yesterday’s protests, police “kettled” hundreds of demonstrators for more than six hours, a move that had been blamed by some for the heightened violence.

However, Chief Inspector Jane Connors of the Metropolitan Police defended the move.

“It’s a valid tactic,” she said. “Police officers came under attack and we needed to make sure the violence didn’t spread out across the London streets.”

But Sophie Battams, 17, told Sky News: “The kettling is causing the violence.

“If you put a lot of angry people in one area, it will escalate to this.”

Students were demonstrating against the coalition government’s decision to triple tuition fees to £9,000 a year, which they say will be unaffordable for most young people.

Learn how to swear in style with uncouth new phrasebook series