Thousands of students have taken to the streets today to protest the hike in university tuition fees.

It comes almost a year after a mass protest over the same issue ended in widespread violence.

Police have been authorised to use baton rounds if the protest gets ugly. But demonstrators have told reporters that police are deliberately intimidating them by warning they could use rubber bullets.

The Metropolitan Police has advised the march, organised by the National Campaign Against Fees and Cuts, must keep to the designated route.

But a group of anti-capitalists broke away from the march when it reached Trafalgar Square and pitched around 20 tents at the foot of Nelson’s Column.

The move echoes the Occupy protest’s tent city outside St Paul’s Cathedral. Police in riot gear have already taken to Fleet Street to prevent the mass chaos predicted should the student protest meet the Occupy camp.

However, many students said they are keen that the demonstration is carried off peacefully so that the protestors’ message gets across.

The issue of tuition fee hikes was all but lost when chaos broke out among the protests last year – particularly when Prince Charles and the Duchess of Cornwall’s car was attacked on Regent Street. 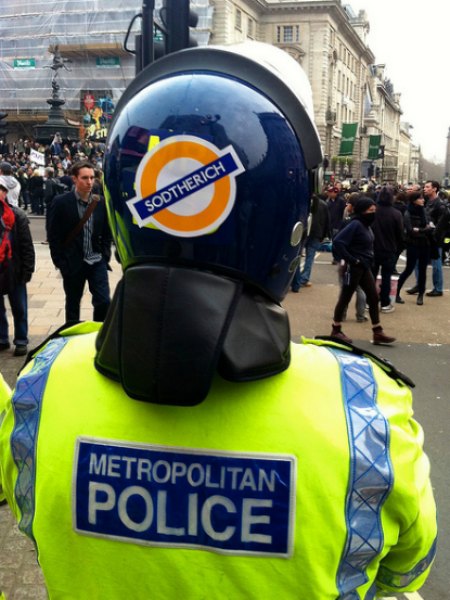 A police officer’s helmet is used by an opportunistic protester.
Photo: Flickr / Chu’s your weapon

New music: ‘Where Did You Go’ singer Shea is creating a word-of-mouth buzz