And, half a century on, audiences still hold a special place in their hearts for 007 (and his women). The enduring appeal is part sexy style, part reinvention. Ever since Ursula Andress emerged from the surf in a striking white bikini in the ’62 franchise starter, Dr No, the Bond story has captured the public’s attention.

From the swinging Sixties and conspiracy-laden Cold War Seventies to Eighties extravagances and reinvention in the Nineties and Noughties, the films have remained sharp and current. Not even newbie Jason Bourne has been able to come close to matching the franchise’s onscreen charisma.

This cinematic majesty is no fluke, however. No matter how suave the actor playing 007 has been, Bond would be nothing were it not for his dapper dress sense and the stylised gadgets Q tools him up with. As times have changed, fashions have too.

Forget the actors for a minute; it has fallen to the bods behind the scenes to ensure Bond stays in his prized place ahead of the rest. Years of tireless behind-the-scenes planning and design have gone into the 23 films, the latest of which, Skyfall, is due out this October. 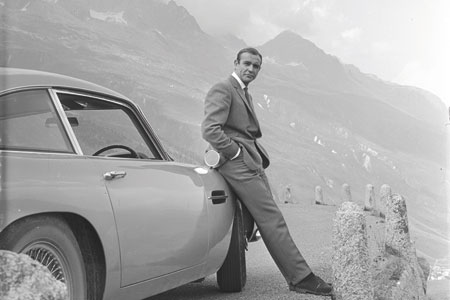 In honour of all this hard graft, an exhibition, Designing 007: Fifty Years Of Bond Style, is currently being showcased at the Barbican in London.

“It’s a retrospective,” co-curator Bronwyn Cosgrave says. “Because, designing James Bond, from the get-go, the films have always been ahead of contemporary. This is the only Eon production where James Bond is a supporting character.

“The sets, costumes and gadgets are now considered as iconic as the man himself. And that is what we hope
to illuminate.”

Co-curator and Oscar-winning costume designer Lindy Hemming points out that Bond has become more international with time. “When [the films started] they were an English phenomenon, which spread across the world so it made sense to dress Bond in an English wardrobe,“ she says.

“But tailoring has changed immeasurably, and the suits that people wear have changed, so it would be strange if you didn’t let Bond change with the times.” 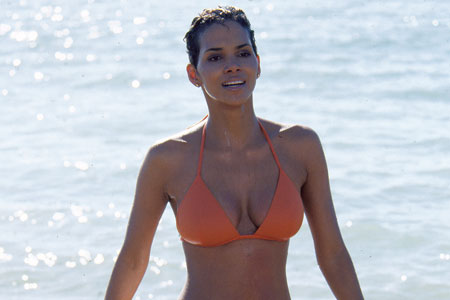 From those bespoke outfits and the eye-catching wardrobe of the numerous Bond babes to Scaramanga’s pen-for-a-barrel golden gun and the famous Aston Martin, Bond’s styles, fashions and iconic invention is the focus here.

Taking an immersive audio-visual approach, there are props aplenty, as well as commentaries, HD screens with various behind the scenes anecdotes, and sketches, storyboards, and props from the movies. Terri Hatcher’s £140,000 diamond necklace from Brosnan era Tomorrow Never Dies, even features in this painstaking procession.

“It’s about the people underpinning the film process,“ Barbican managing director Nick Kenyon says. “This show is a fitting tribute to the artists, craftsmen, technicians and the cast, too, who make these movies possible.” 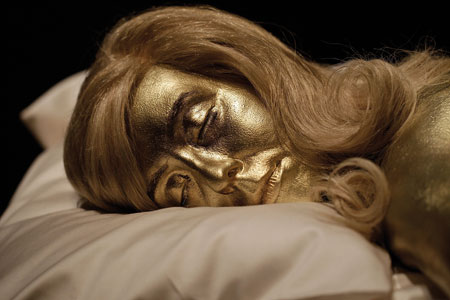 Bond Films have always carried a futuristic air, a spy-fi sensibility with OTT action and the designs in this extremely thorough exhibition reflect this.

Ken Adams’ famous cavernous set designs (see above), imbued the series with a kitsch forward-looking view of how the yet-to-be might look (an aspect mocked in the Austin Powers movies).

No more keenly is Bond’s ahead-of-the-curve’ sensibility felt than in his gadgets, from the downright escapist Lotus Esprit submarine (models here only, sadly, and little ones at that), to the far more grounded (literally) knife-shoe.

The exhibition opens with the Gold Room, a shining den that features Auric Goldfinger’s gilded jacket and the could-only-be-named-thus-in-a-Bond-movie Pussy Galore and her incredible waistcoat from Goldfinger.

These cinematic treasures sit alongside sketches and designs from that film’s Fort Knox raid, and the room itself is lined by a series of prison-style bars behind which gold bars delicately sit (you can even buy your own from the Bond gift shop if you are so inclined).

In the centre, a half-naked lady lies, covered head to toe in gold paint in tribute to the third, and series-levitating, Bond movie’s deadly despatch of a Bond babe.

There’s a dramatic selection of the series’ wardrobe choices, from Dr No’s Sylvia French dress to the Egyptian attire of Octopussy, and a ‘tuxedo-lair’ centrepiece staging of the poker scene from Casino Royale (thankfully minus any Tussauds-esque Daniel Craig waxworks).

Viewers are also given an expansive look at the franchise’s villains, including Christopher Walken and Grace Jones’ Max Zorin and May Day from A View To A Kill, the stupendously named Xenia Onatopp and her skintight leather getup from 1995’s GoldenEye (named after Bond scribe’s Ian Fleming’s Jamaican home), and the Star Wars-influenced Moonraker’s Drax, the adversary truly set on world domination. 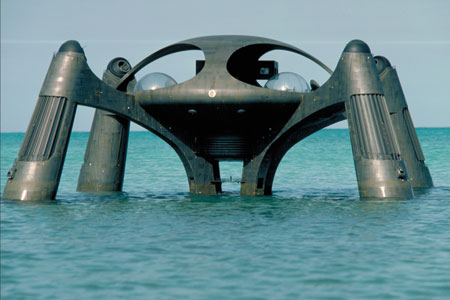 There’s and even a glass case with moulds of the teeth the Bond-foe-turned-ally Jaws made famous.

While the attention to detail astounds, and the presence of real props (not replicas) generates a sense of behind-the-scenes magic, the The Ice Room disappoints – its focus on Bond’s snow-capped action escapades is a welcome reminder of the series’ stunt stand-outs, but it’s based primarily around Die Another Day, quite simply Bond’s lowest point and a film we could best do without being reminded.

James Bond remains a superb British icon and this exhibition honours the man in a specific and studied manner, with a depth and detail that will impress casual fans and MI6 aficionados alike.

With a global tour lined up after the exhibition ends in September and October’s Skyfall, starring Craig alongside Javier Badem, Naomie Harris and Berenice Marlohe, this showcase remains a fantastic addition to the ’best of British’ theme categorising the nation in 2012.