“It’s not about race, it’s about the human race,” filmmaker Matt Norman (above left) says of his documentary Salute, about the black power salute given by US sprinters Tommie Smith and John Carlos on the 200m podium at the Mexico 1968 Olympics, and particularly his silver-medal-winning uncle Peter Norman’s role in the political protest.

With London 2012 around the corner, and issues of race and nationality high on the agenda after the recent European Football Championships and the media-furore over ‘plastic Brits’ competing under the Team GB banner at this month’s games, there’s no finer time for Norman’s film.

Indeed, the events portrayed make the 40-year gap between then and now seem awfully small, the progress achieved falling short of where we should be.

Back in 1968, the civil rights movement was in full flow, Martin Luther King Jr had been assassinated in April of that year, Mexico City had seen 200 students and protestors killed by Mexican militia and there had been a proposed boycott of the 19th Summer Games by black nations – although this was not to materialise.

Standing on the dais for the men’s 200m were Californian gold medallist Tommie Smith and Harlem-born John Carlos, with Aussie Peter Norman taking the silver medalist’s glory. Smith and Carlos, though, had plans, ones that would rock the world, the sport, and their lives for evermore.

As the US national anthem rang out through the stadium Smith and Carlos bowed their heads and stood motionless, with an arm each held aloft, one hand each adorned with a black glove in a Black Power salute.

Norman stood proud, too. He was not just ‘the white guy’ in the middle, but an active participant in the protest, himself adorned with an Olympic Project for Human Rights badge to show unity, and equally as aware was he of the danger his actions would put him in. 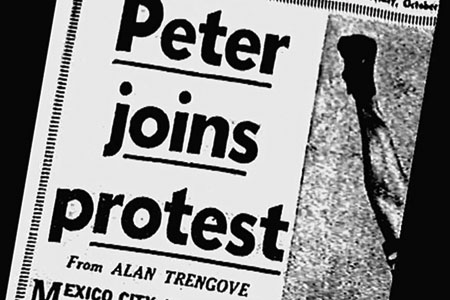 “A lot of people think ‘Yeah, he stood there and wore a badge, but it wasn’t a badge, it was a black badge. He was supporting American and Australian black civil rights, and for a white guy to do that in this country was dangerous,” Matt Norman says of his uncle’s actions.

We still have racial issues in the UK and Australia, and it wasn’t that long ago that we had the White Australia policy and the stolen generation. When you think that Aboriginal people were only allowed the vote in 1970, it is quite incredible.”

In 1968, the aftermath of the trio’s actions echoed around the world. Nazi-sympathising IOC president Avery Brundage wanted to see their medals rescinded, and the media was in uproar for, supposedly, the breaking of the Olympics’ cardinal ‘no politics’ policy.

Peter, especially, faced a fallout that he could not, or perhaps at least did not, envisage.

“He was always proud of what he did. He knew he was going to be reprimanded as it was a protest at an Olympic Games,” Matt says.

“It made life hard for Tommie and John, but Peter got a slap on the wrist in comparison. The real damage, though, was when he came home.” 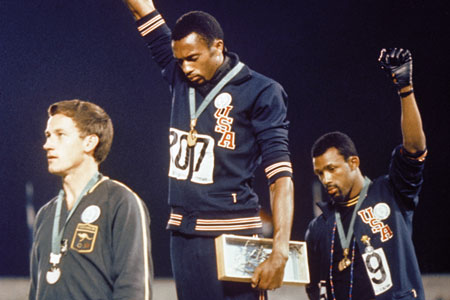 Norman qualified for the 1972 Munich games 15 times. Yet, despite being the world number five, he was not selected.

“On his times, he would have won the gold medal had he gone but Australia didn’t send any sprinters that year.”

Tired of being shunned by Australian athletics, Norman subsequently quit, yet his pride and steadfast moral compass prevented him from becoming bitter.

I was there and did my job, but I was also there as a human being and if anyone doesn’t want to take me to an Olympics because I stood up for the rights of real people, then I don’t want to go’.

Remarkably, though, in 2000 when the Games were in Sydney, Peter was not called up like all the other past champions, which was a disgrace. The only people who cared were the Americans who invited him on their behalf.”

The photo taken of the famous moment has become one of the most iconic in sporting, and indeed social, history, and the camaraderie between the three men remained, so much so that Smith and Carlos delivered eulogies at Norman’s funeral when he passed away in 2006 from a heart attack.

Although history has focused much on the incident, Norman’s role has always been underplayed, or ignored, mostly out of ignorance, and this is what Salute, in part, intends to correct.

For one, his actions had an impact on his young nephew, and this changing of one person’s perception of the world is the template for the way progress is, and still needs to be, made.

“I always knew him as the fastest white man in the world [back then], but he would say that that was a racial slur and that he was just the second fastest man.”

Perhaps a sign that progress has been made was shown by the response of the International Olympic Committee when they saw the finished film. “I had to send it to the IOC for their thoughts and I thought we were stuffed,” Matt says.

“But they said it was a very good representation of the time. While they hope they are not seen that way now they did see the film as documenting a part of history – we were totally shocked.”

Salute is in cinemas July 13 and DVD July 30

Warm up for Wimbledon

Top 18 tours and activities to do in New Zealand