A long standing Norwich based club night, put together by three friends after a disastrous trip to a London club, that prompted them to get their own parties together, boasting top class DJs including Alex P, Tall Paul and Lisa Lashes.  It has gone from strength to strength, this year the night left its spiritual home in the city and headed to the seaside, to a place called Lowestoft. An experiment brought about by DJs Gavin Barker (funky toast) and Danny Burch that definitely paid off.

“Things just seemed to happen rather quickly,” said Gavin. “Myself and Danny got our heads together and Mr Banthorpe (original Pam’s House organiser) allowed us to take Pamela to the seaside, before we knew it we had a vision, one we both shared. It had snowballed. On a dark winters night, I took Danny to the venue, we could both see the potential in the Aquarium and a date was booked.”

Pam’s House seaside summer ball was born and we were excited to be at its premier. It may have been smaller, but under no circumstances was it a lesser affair when it came to production, organisation, attention to detail and above all atmosphere. All three rooms went off to perfection. You know they’ve got it right when you walk in the venue and the everyone is just buzzing with excitement before you even get to the main room.

The main room compromised of hard house/hard style with DJs Nelpin, Juice and Frisky of Bionic fame, Rob Tissera and Pams House own Danny Burch banging out beats that made us want to skip everything and get straight on the dancefloor, no warm up, just straight in it with the rest of the stomping crowd.

The night exceeded my expectations. Well done lads. looking forward to the next one, and readers – it’s not to be missed. 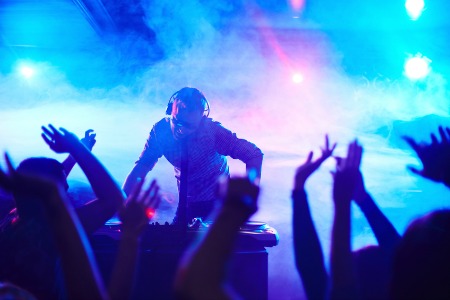 If you regard hard house as your thing then there’s a good chance that you will have been to a Frantic gig at one point or another. It’s almost 20 years since a young hard house fanatic by the name of William Patterson got fed up of wading through long evenings of funky house just to get to the harder stuff at the end of the night. He decided the best plan would be to set up alone. On 15 August 1997 Frantic was born – hallelujah. It sold out within the hour. Almost 19 years to the day, it’s still going strong and this year it shares its birthday with Timeless, a 14-year-old trance based club night for their first ever joined party. And what a night it was.

Hosted at KOKO London (something borrowed) it was quite possibly the UK’s biggest hard house and trance classic event of the year, with names like Lisa Pin Up and Andy Whitby, BK, Andy Farley and Rob Tessera in the main room plus Ilogik, Jake Martin, Ben Tevens and Adam M DJing with PSR and RAF in room 2.

The excitement was building before we even reached London, Jordan Suckly had been announced as the special guest and we just couldn’t wait to get straight in there, and then bang! We were there! Woohoo!

From the second we entered Wayne Smart and Ashley Waters were delivering a set that was simply mind blowing, an unrelenting, constant stream of banging tunes and seamless mixing that had us totally absorbed and not wanting to leave the dancefloor for a second. Set after phenomenal set – it just kept coming, washing over us in waves.

K90 had the club up and well and truly on its feet, Lisa Pin Up and Andy Whitby looking like they were enjoying it as much as everyone else in the room. Both rooms were alive with an electricity, rare to find consistently, it was perfection.

Only complaint from us, it had to come to an end.

If this is, or ever has been your scene you would have had to be living on Mars not to know the name.  A worldwide club event that’s performed to sold out venues in Europe, South Africa, Australia, China, Singapore and Japan… the list goes on and on. The reunion hosted in its spiritual home of Sheffield was unlike anything before it, this was Gatecrasher the reunion, the night the lion roared once more.

Created in the early 90’s by Scott Bond and Simon Raine, Gatecrasher quickly gathered momentum becoming one of the main UK brands across the scene.

Its origins lay in Birmingham however it quickly moved to Sheffield offering the first all-nighters in the area and with massive names playing throughout (Judge Jules was resident DJ) it was an instant success. 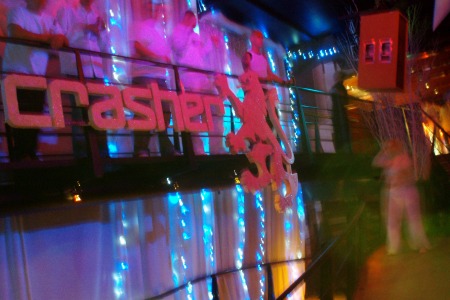 From all around the country people would come, the notoriously strict door policy seemingly to encourage them all the more, as the brand grew stronger, holding bigger events, purchasing its own venues, releasing albums and eventually launching its own record label it gained award winning club status and joined forces with Ministry of Sound.

Sadly, after spanning two decades it suffered various setbacks, drug raids in clubs, a decline in attendees and a fire in Gatecrasher one night saw the brand suffer financial difficulties, controversy and administration followed, clubs were closed down for a variety of reasons and it looked like Gatecrasher had closed its doors for the last time. That is until reunion night.

That familiar excited tingle began as we approached the venue seeing the throng gathered outside, a quick friendly chat with some happy strangers as is the time served tradition and we were inside. A brief issue with friends who had purchased tickets, but somehow the payment hadn’t been taken was cleared up in no time by the more than helpful staff who despite being under pressure (our friends weren’t the only ones with a similar ticket issues) smiled and wished us a good night.

We walked in on John Kelly’s set and immediately felt the music coursing through our veins, he was just phenomenal and (my favourite set of the night. The world acclaimed hard trance DJ had everyone up stomping and the night had just begun.

From the likes of M.I.K.E, Tall Paul and Seb Fontaine (another fantastic set that just made you feel glad to be part of it) Eddie Halliwell and Scott Bond managing two sets in both the main room and the rebooted area that also hosted DJs Danny Stubbs, Factor B and Jordan Suckley…what a night!

Everything was fine tuned to a tee, the lighting, the sound, the euphoric mix of clubbers, both younger and older dancing, side by side. Even the smoker’s area was buzzing with the chatter of how expectations had been surpassed and “hey! who’s coming to the birthday bash in October? “I am!” damn right! I can’t wait!

Yes I know, not exactly a club night is it? But it was an August bank holiday, the sun was shining and we decided to make the most of it.

For those of you who don’t know Newmarket is the home of British horse racing. Its history stretches back decades, King Charles II competed there in 1671 and over 80% of race horses can trace their ancestry back to a horse named Eclipse that was born here in 1790. Anyway enough of the history lesson.

It’s now 2016 and Newmarket is celebrating its 350th birthday with the usual top class race events and the famous Newmarket nights hosted that has previously hosted acts such as Tom Jones, the Kaiser Chiefs, Kylie Minogue, Mark Ronson, Jess Glynn and so on.

The X Factor Winners Little Mix hit the stage for their Get Weird Tour and appeared onstage right on cue in sparkly blue one pieces, followed by a troupe of male backing dancers, boomed out hits to the delight of their fans.

Now I will admit, manufactured X Factor bands really aren’t my cup of tea, but it was great to see so many happy faces.

The night was marred by a handful of drunken adults pushing and shoving in front of the stage and spilling drinks in the alcohol free area (I wasn’t one of them). With a sell-out crowd of 20,000 it was impossible for staff to police the event properly, so the madness continued.

Just a little tip, if you’re driving leave five minutes early as getting out of the car park is hard work.

So after Little Mix I’m going back to my roots. It’s September and I’m heading to Moondance to rave the day away.