Summer lovin’: How to host the best BBQ

Yes, it may still be raining. Yes, that rain may continue for another month. But, when the sun does finally make an appearance, you’ll only have a small window of opportunity to fire up that BBQ – so you’d better make sure you’re properly prepared. If you think hosting a barbie is as easy as picking up a few throw-away grills, buying some frozen burgers and garnishing them with ketchup, think again. Although this might be acceptable for an impromptu meal, you’ll need to push the boat out a bit further if you’re looking to impress at a party.

First things first, sort out the booze. Once this is in hand, you can concentrate on the food. Rob Cottam, Newman Own’s Head Chef, says if you’re taking control of the BBQ, make sure you’re well stocked with your favourite tipple. “Failing that,” he adds, “have a back-up plan and adopt the Australian BBQ shuffle. “When the person playing with the items on the BBQ runs out of drink, they disappear off to get another one. The person closest to the BBQ takes over until they run out – and so the BBQ shuffle is born!”

In keeping with the British theme of 2012, serve Pimm’s and lemonade in jugs with chopped strawberries, oranges, cucumber and mint leaves – not too much, guests won’t want to chew through their drinks. Beer is a must, so opt for something out of the ordinary, such as Amigos, which has a tequila-flavoured version with a hint of South American limes. Or grab a few bottles of Crabbie’s alcoholic ginger beer – the spiced orange flavour is perfect for summer.

The main event: The food

If all you’ve got is a disposable BBQ, don’t worry, it’ll do the job. Cottam says: “Place it on bricks, concrete or even bare earth – in my student days, I put a disposable BBQ on a flowerbed that had wood chippings and managed to set them on fire.” Just make sure you stick to food that will cook quickly, such as burgers, steaks or sausages. For anything more complicated, you’ll have to shell out for better equipment – but it doesn’t have to be pricey. A bright-red, portable fire bucket BBQ will set you back £28.95 (coolandfunky.com). For something a little more stylish, there’s the Smokey Joe BBQ at £59.99 (notcutts.co.uk).

Don’t just whack the meat on the BBQ and hope for the best. Marinate or season it first (Tabasco Chipotle Pepper Sauce will give it an extra kick) – doing this the night before will ensure it absorbs all the flavours. Everything should be cooked on a low heat (hold your hand about six inches from the grill; if you can only keep it there for a minute, it’s too hot) so it’s nice and juicy. If you’re being adventurous and making your own burgers, mix in milk to make sure they don’t go hard or shrink. Add some cloves of garlic and slices of pear to give them a tasty edge.

For other meat, Cottam says: “To cook chicken properly, cook it in the oven and then finish it off on the BBQ – it’s a sure-fire way of cooking it through properly, but still getting a great BBQ flavour.”And long-handled tongs and flippers are essential to avoid too much smoke inhalation and getting too hot.Sauces are incredibly important. As well as your three classics – BBQ sauce, tomato ketchup and mayonnaise – opt for some chili sauce or garlic mayonnaise. For mustard, it has to be American French’s. 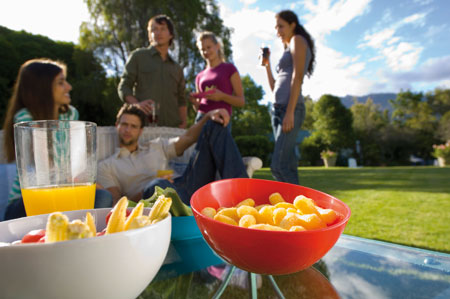 Bits on the side: The nibbles

While you’re busy cooking the meat, make sure there’s stuff to snack on so that your guests don’t get too drunk, too quickly. Stock up on posh crisps, such as Fairfields Farm Crisps’ new butter and mint flavour, and TorTyrrells, the English take on Mexican tortillas from from Tyrells – and add a few dips on the side. When it comes to the salad, don’t opt for a bag of pre-washed leaves, do something more stylish. Chop beef tomatoes, mozzarella cheese, red onions and basil leaves, then drizzle with olive oil and balsamic vinegar.

For another, mix baby spinach with a wholegrain mustard dressing, then add cherry tomatoes, sliced mushrooms, chunks of avocado and parmesan cheese. “Don’t take your salad leaves out of the fridge until just before everything else is ready to serve, otherwise they will wilt,” Cottam says. “Also avoid putting your salad dressing on your leafy salad in advance as this will also cause the leaves to wilt and go soggy.” If all else fails, just make sure you buy enough booze and grub. “No one remembers there being too much food in a bad way, however if you run out and people are hungry you will hear about it for ages!” Cottam adds.

Don’t break out in a cold sweat if you’ve got some non-meat-eaters tagging along to the party. Here are some tips of what to cook for the veggies, and it’ll be so good, the carnivores will want to
get involved as well.

Kebabs
Thread halloumi, cherry tomatoes, courgettes and onions on to skewers. You can make these the day before, taking them out of the fridge just before grilling. Then brush them with a thyme and lemon dressing mixed with olive oil and mustard. Cook for about five minutes.

The ‘meat’
Don’t just buy any old bean burger – if they’re the cheap ones, they’ll fall apart while cooking. Instead, look out for Fry’s products (frysvegetarian.co.uk), which has everything from braai flavoured sausages to spiced burgers. The veggies will be impressed.

Spicy corn
Wrap whole corn on the cobs in foil, before cooking, add garlic butter with a dash of fresh chili. Then grill until tender.

Keep it sweet
Chop a few sweet potatoes into chunky wedges and throw them on the barbie after brushing with olive oil and dusting with cajun spice. They’ll take around 15-20 minutes to cook, or about seven if you boil for five minutes first.

Review: The Saloons at Upstairs Beresford