People usually adhere to one of a handful of rituals on a Sunday morning – singing hymns in church for the religious-minded, hitting the pitch for five-a-side, or diving for the paracetamol to combat the previous night’s hangover.

Now you can add London’s first atheist church, The Sunday Assembly, to that list, which has started holding monthly ‘services’ for the ungodly.

The brainchild of comedians Sanderson Jones and Pippa Evans, The Sunday Assembly is a meeting that sets out to help us “live better, help often and wonder more”.

Reflecting on our own lives and how we relate to others, and what we could do to improve both, it takes the best things about religious services, but scythes out the man upstairs, whatever form he, she or it may take.

And while there is undoubtedly a deep irony in a godless congregation being led by a man who couldn’t look more like Jesus even if he turned Thames Water’s stocks into glorious Cabernet, it is a noble, ambitious, soul-invigorating, and surprisingly successful proposition.

Held at deconsecrated church The Nave in north London, it captured Londoners’ hearts and minds when it launched this month, clearly meeting a spiritual desire and longing for community that was previously present but not served. 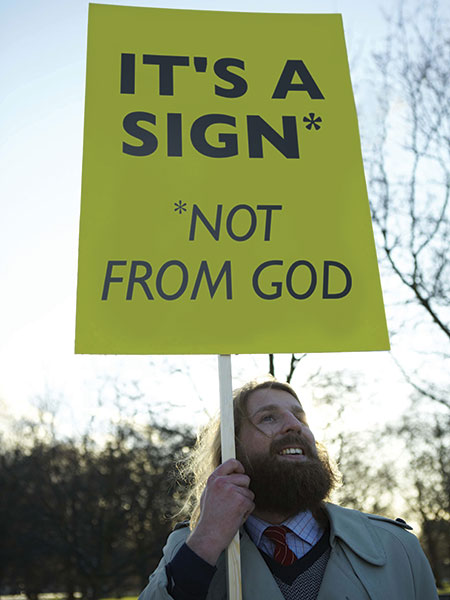 The enormous popularity from the outset surprised everyone involved, not least Jones himself.

“The response has been overwhelming,” he tells us, the excitement in his voice bubbling to the surface.

“I have done so many events in London over the last five years that I thought were interesting, but most of the time you’re farting into the wind.

We had the first Sunday Assembly and hoped for 30 people, maybe.

I was emailing people that had come to [Jones’s stand-up project] Comedy Sale in the hope they’d come along, but there were so many people there, a lot of whom we had no idea who they were.”

Jones’s and Evans’s earnest ambitions were met with a 200-strong congregation.

The idea for an atheist church had been circulating in Jones’s mind for some time, but it was only during a car journey with Evans, as the two discussed religion and their similar but not always matching opinions on it, that they decided to launch the Assembly.

Comedy Sale had been built around a community, as Jones hand-sold tickets for his stand-up shows and encouraged meet-ups for those who attended.

“Then I thought: ‘If they are meeting for a party, wouldn’t it be good if we found some projects to work on, too?’” 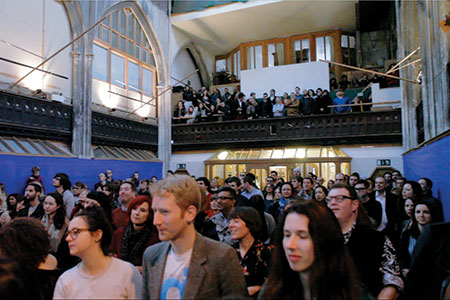 Convinced to stop procrastinating, he set about getting the Assembly going, and modifying as he saw fit once his baby was alive.

“I could have done all these ludicrous things – and then there will be the ceremony of the touching of the shoe which symbolises … whatever! – but it was easier to start with something and learn as you go about what works and what doesn’t.”

Strangely, what Jones found worked was what he had been most worried about including.

The format of the service is fairly akin to a religious one, with readings, music and singing (Oasis’s Don’t Look Back In Anger was performed by the house band earlier this month), plus talks and moments of reflection based around a theme.

The first service’s focus was ‘Beginnings’, while February’s is ‘Wonder’, with CERN particle-physicist Harry Cliff talking about discovering the Higgs Boson – or ‘God’ particle – and the Hadron Collider, in which tiny particles are flung towards each other at the speed of light.

“If you look at your life a lot of the memories you really hold on to are the ones characterised by wonder – the time you went for a walk and then suddenly this view turned up – [and] it’s about getting more of that in our lives,” Jones says.

“The interesting thing is that people have asked for more of the things that I was slightly wary of [including]. It’s never going to be a serious affair, but it’s not a comedy club either, and I was worried about the moment of reflection. “ 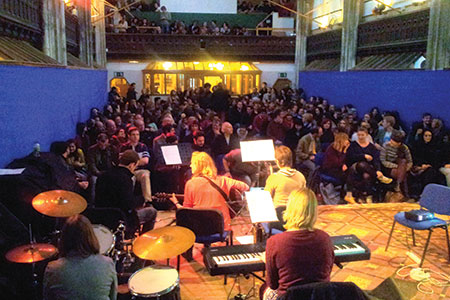 “I had a feeling people [would be] reluctant to close their eyes in a room full of strangers, and as soon as it happened all I could think was, ‘Oh god, it’s going on forever, they’ll think I’m a hippy.’ But people said they’d have loved it to go on for longer.”

There is something of the hippy about Jones, and of the Assembly’s humanity-supporting intent, the together-as-one identity at the core of their ‘ideology’.

But he insists his ‘church’ isn’t serving a “supernatural, hippy spirit, but a spirit in the sense of your internal life, and people do want to think about that”.

“But a real community is about finding connections with people you don’t know, who don’t do the same things as you, and finding something underneath that binds you together.” 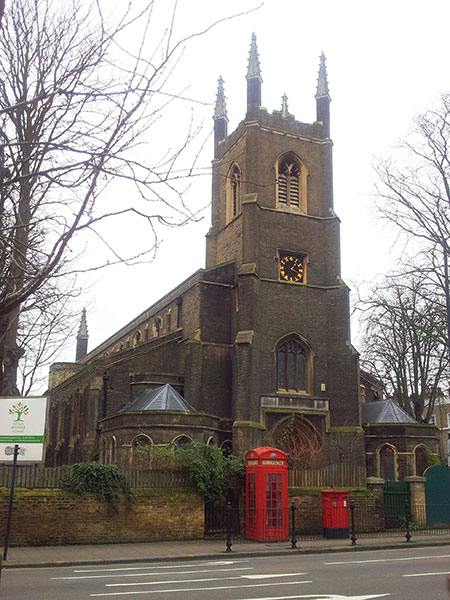 There have been those who have been quick to find fault with an atheist church – those on the religious side of the atheism debate chastising it for being held in a church first of all and for making atheism a ‘new religion’, and then atheists who’ve found grievances with the Assembly for exactly the same reason.

Jones, whose mother taught at Sunday school and who himself confesses to being a regular scripture prize winner in his formative years (the myths intrigued him), has even been asked to contribute to a debate on this subject for The New York Times.

While atheism, for some, is as much an identifying belief as Catholicism is for others, this is in no way the Assembly’s purpose. It takes some of the positive aspects of religious meetings and filters out the deity-duty.

It is defined by what it is about – community and wonder – rather than what it is not about and does not believe in. Jones’s passion for it is clear and his delight at its success only matched by enthusiasm for where it could go.

“We are doing our best to make them as good as possible, because you are only as good as your last Assembly,” he jokes, mimicking footballers’ post-match monotonies.

“And I have a clear idea about where I would like to go with it,” he adds, before revealing just how passionate he feels.

“The Sunday Assembly is a long-term thing that I could see myself doing for the rest of my life.” Now that is something to wonder at.

First Ashes Test in the balance