T20 cricket has grown bigger than anyone expected, but could other sport spin-offs leapfrog the original?

This week we’ll see a finals series for the second big bucks international tournament in as many months as the ICC T20 Champions League wraps up in South Africa (the final will be played on October 28), following the West Indies’ win in the T20 World Cup in Sri Lanka.

The condensed form of the game may not be for all cricket lovers, but it’s been a hit with sponsors, TV networks and, most importantly, punters.

Just like T20, most athletic pursuits have modified versions so they can be played indoors, in smaller teams, within shorter time frames or to make it more entertaining – and sometimes the variation even breaks into the mainstream.

Less than a decade ago the first professional T20 matches were played between English county sides, the wham-bam format an ideal option for after-work pints.

Now every major cricketing nation has its own short-form league, with serious money and international imports, including the Big Bash in Oz. As with world cricket as a whole, that tournament is weighted towards India, the sport’s richest market.

The Indian Premier League (IPL), the big daddy of T20 tournaments where some players, such as Ravindra Jadeja, get auctioned for US$1m-plus for six weeks’ work, has four teams in the so-called Champions League – Australia and South Africa have two each, while the other nations had to play qualifiers for the two spots filled by Auckland Aces and Yorkshire Carnegie.

Since the IPL threw stupid amounts of cash at the format in 2008, international fixtures are more than a novelty at the start of a series with blaring music and jokey commentary, and as such the game’s become more refined.

Batsmen no longer dominate bowlers – 160 is now a competitive score, where 200 would have done the job before bowlers worked out how to make the axe-man’s job tougher.

Good for crowds is the fact the team which hits the most sixes tends to win – at the World Cup this was the Windies.

Pundits agree the explosive new form has reinvigorated cricket, possibly to the detriment of the 50-over game (see next page) and maybe helped Tests become more dynamic.

Aussie legend Adam Gilchrist has even said it should be an Olympic sport: “It would be difficult to see a better, quicker
or cheaper way to spread cricket throughout the world.” 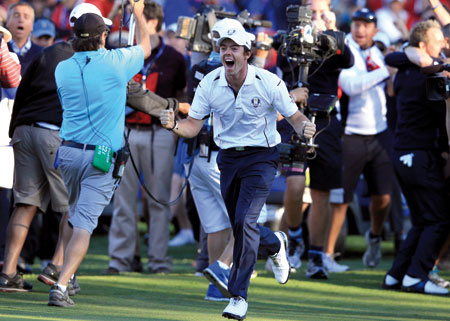 Another gentile sport in need of an excitement injection gets one whenever the US and Europe clash clubs for the Ryder Cup – or Rest of the World meet the US in the President’s Cup.

The contest buzz doesn’t all come from the quality of the players (the best) or the tension that comes with having teams in a usually solitary sport – it’s match play.

Every hole produces a score, whether it’s four ball, foursomes or mano-a-mano. You win the hole, you get a point. Win the most holes out of 18, you win the match.

A play-off, which happens if two players are tied at the end. Guess how this is decided? Match play. 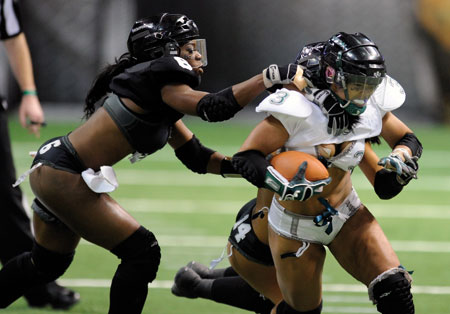 There’s no touching American Football in the US – it will make nearly US$40bn in 2014-2022 on TV deals alone. But something so big is ripe for quality spin-offs.

The indoor Arena Football League is in its 25th season. But the brightest light in American Football offspring is the Lingerie Football League, a seven-a-side full-contact contest played by scantily clad but fiercely athletic women.

It’s taking off globally. After a three-match All Star Series with one game in Mexico and two in Australia this year, the LFL is launching an Aussie league in 2013 and a European one in 2014 – an LFL World Bowl is already planned to play in Brazil in 2014, too. 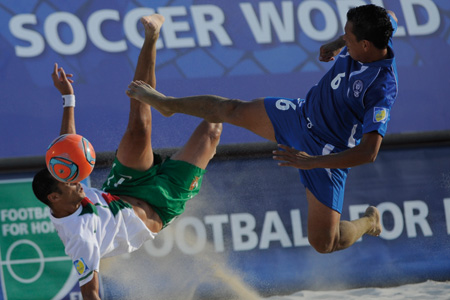 FIFA controls most of football’s off-shoots, futsal and beach being the most popular – they’re a good look for a sport that, despite the gazillions of cash at the top end, likes to be the game anyone can play anywhere.

They’ll never match the main product, but are genuinely huge world sports. Brazil and Spain have dominated futsal (they’ve won three and two World Cups respectively since 1989) – no surprise there.

The smokey is beach footy. It’s growing fast, especially in Europe with the touring Euro Pro Beach Soccer League. And guess who’s on top of the world? Somewhere sunny with golden sands?

Nope, Russia, who beat Brazil 12-8 in the 2011 World Cup final in Italy. And they were beaten by the landlocked Swiss for the Europe title this year.

Ra-ra fans have it good – vibrant club rugby, stellar top-tier competitions (Heineken Cup in the north and Super 15s down south) and, with the exception of the awesome All Blacks, consistently competitive international matches.

But making its mark in a big way is Sevens – it’ll be an Olympic sport in Rio 2016 and there are nations doing well that many of us wouldn’t even know played the game.

Did you hear Kenya beat Australia on the Gold Coast a fortnight ago?

They scored a try in the final minute to knock ‘em out of the IRB Sevens World Series – and they celebrated accordingly.

Scotland may have invented the game in 1883, and the flamboyant Fijians and clinical Kiwis may lead the pack, but emerging teams such as the US, Hong Kong and Japan are more than running with it. 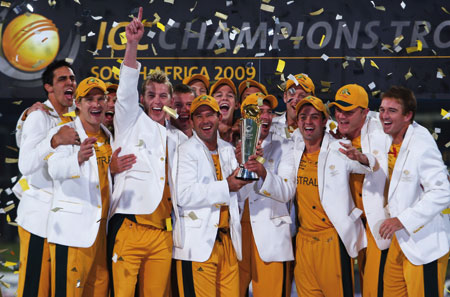 The rise of Twenty20 cricket and game’s stakeholders’ commitment to keeping Test cricket as the sport’s pinnacle leaves one-dayers like piggy in the middle.

The ICC is hoping to give the 50 overs format a boost when it holds the Champions Trophy, played by the top eight-ranked nations in the world, from June 6-23 next year in Birmingham, London and Cardiff.

The four-yearly trophy will make way in a packed international calendar for the ICC Test Championship from 2017.

But former Aussie skipper, T20 shunner and two-time winner of the trophy Ricky Ponting says it’s “always a tournament I look forward to playing in”.

“It’s going to be an amazing few months of cricket in England with the Champions Trophy followed by the  Ashes series throughout July and August,” he said.

Tickets for the tournament go on sale from November 5. Visit icc-cricket.com for more details.